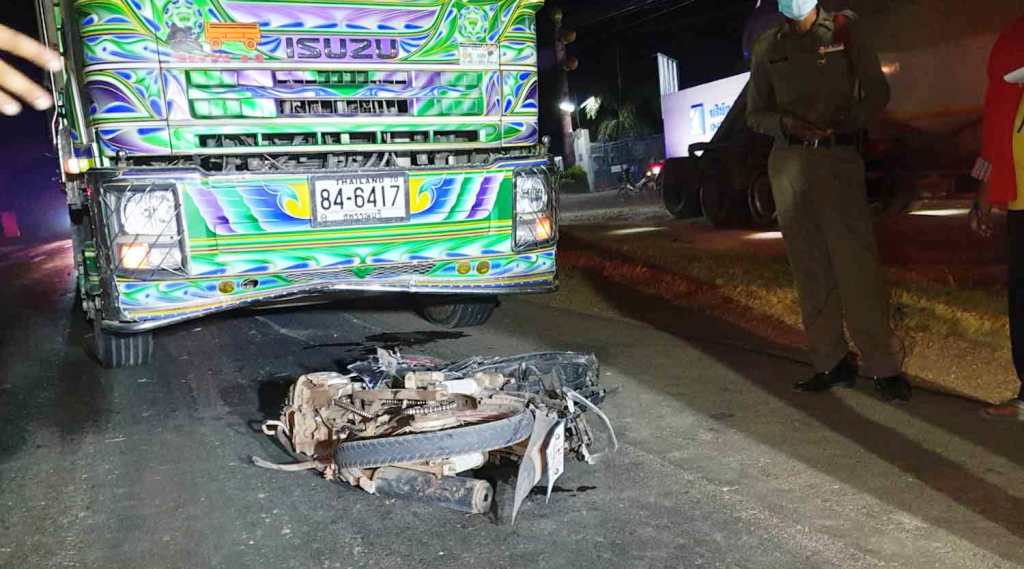 A motorcyclist was killed after his motorcycle was hit by a pickup and then run over by two trailer trucks on a highway in central Thailand on Monday night. The accident occurred about 9.30pm in front of the Alpine company.

A Prachin Buri police investigator said 26 year-old Sirithon Chanudom, 20, told police her cousin Mr Nonthakorn Hongthong, 33, was taking her on his motorcycle to work the night shift at Alpine.

A pickup suddenly emerged from a Soi, hit the motorcycle and sped away. The motorcycle fell on the road with Mr Nonthakorn,trapped underneath it. Miss Sirithorn said she was not hurt and went to help Mr Nonthakorn.

Before she was able to free him, an 18-wheel trailer truck loaded with cassava roots ran over the motorcycle with Mr Nonthakorn. Miss Sirithorn said she was lucky to escape being hit herself by the trailer truck.

The trailer truck dragged the motorcycle and Mr Nonthakorn, along the road for about 50 metres before stopping.

The motorcycle was destroyed and Nonthakorn’s body was badly mutilated. The accident brought traffic to a halt and tThe road was closed for over an hour.

Mr Nonthakorn’s body was taken to Chao Phraya Aphaiphubet Hospital. Police were still questioning witnesses trying to locate the driver of the pickup that first struck them and sped off.