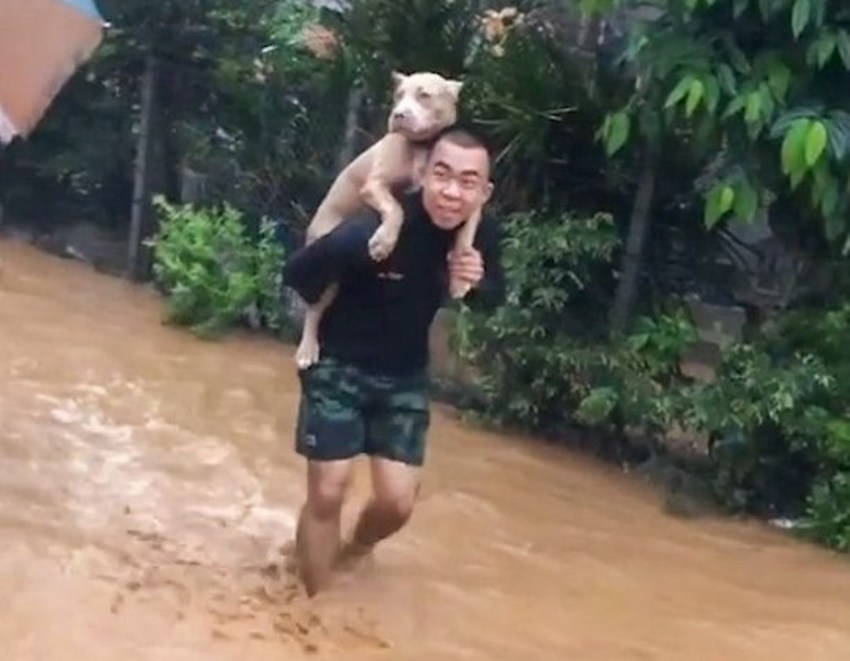 A home owner was forced rescue his dog on his back after flooding from heavy rains forced them to flee their home in Chiang Rai, Thailand, on Sunday morning. Theerachot Homjom picked his dog up and saved him from being swept away by torrents of muddy water.

Buildings across Chiang Rai were flooded when the Kuang River burst its banks, causing residents to flee to higher ground. But while some carried belongings with them as they fled, Theerachot hurled his dog onto his back.

The soldier, who has been helping villagers in floods across northern Thailand in recent weeks, said: ‘The floods can destroy my house but not this beautiful dog.’ Heavy rain caused flash floods which submerged homes in more than 44

Thai provinces including Chiang Mai, Loei, Phayao, Lampang, and Nong Bua Lamphu. According to the Disaster Prevention and Mitigation Department, Loei suffered the most damage with 700 homes affected.

Heavy rain and flash-flood warnings are reported to remain in force until at least Tuesday.

By Monday morning, residents in rubber boots were out clearing debris from the storm that uprooted trees, pulled down electricity poles and tore sheet roofs from some buildings.

“The flood came very fast, my family couldn’t grab anything,” said Rattiya Panich as she cleaned her house. Two people died, according to the interior ministry.