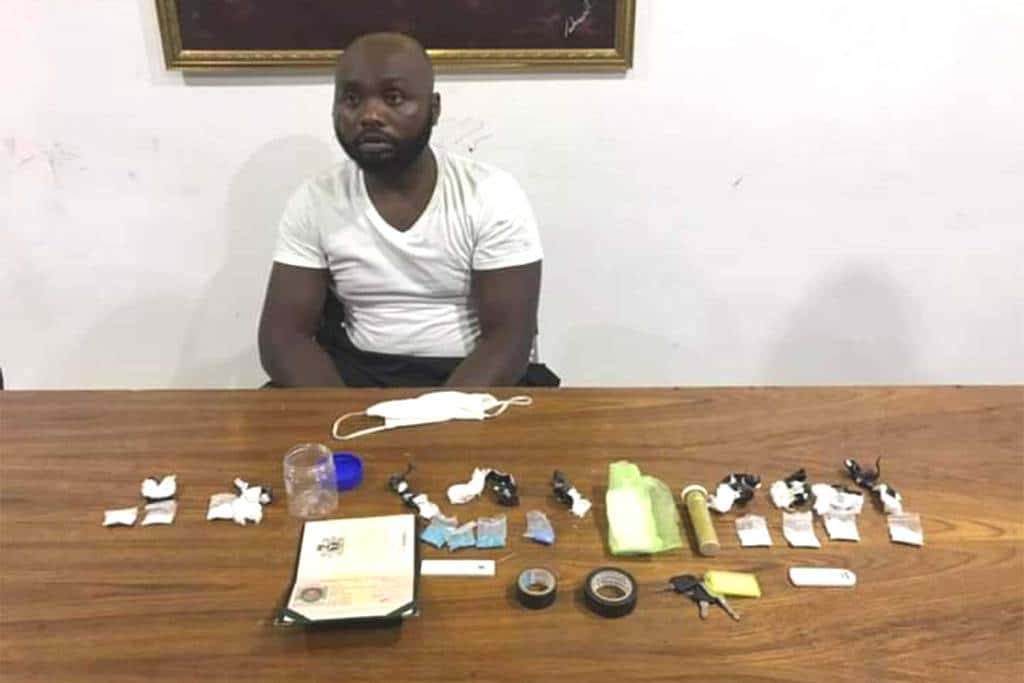 Police in Phuket have arrested a Nigerian man for selling crystal meth, cocaine and ecstasy as he was allegedly making a delivery to customers in Patong area.

Davidsmith Chinazaekpere Ejiogo, 26, was apprehended in Soi Nanai 8, off Nanai Road, in tambon Patong on Tuesday, Patong police said. Arresting officers found one sachet of crystal meth, six of cocaine and four of powdered ecstasy in his pockets.

The arrest followed a tip-off from an informant that an African man would deliver illicit drugs to customers in Soi Nanai 8 on Tuesday.

Police assigned to the area noticed the suspect standing, waiting in the street. They approached him, and a search revealed the drugs.

Mr Ejiogo allegedly admitted he had more drugs in his room in Kalama area. He led police there and some cocaine was found inside a drawer under his bed, and some ecstasy hidden under a tree in front of the room, said police.

According to the Bangkok Post he was taken to Patong police station for further questioning.

The suspect said he bought the drugs from an Asian friend in Bang Thao area of Thalang district, but did not know his real name, according to police. He was held in police custody on charges of illegal possession of illicit drugs with intent to sell.

Last week four South Korean men were arrested for working illegally, with one of them wanted by Interpol for posting child pornography on the internet, immigration police said.

Their arrest follows information from the South Korean embassy, which asked Thai authorities to track down a group of men from South Korea believed conducting an illegal business in Phuket.

After an investigation, immigration police on Dec 29 searched a rented house at Villa Kathu Housing Estate in Kathu district of Phuket.

There were four South Korean men in the house, working with computers, designing websites and trading in cryptocurrencies