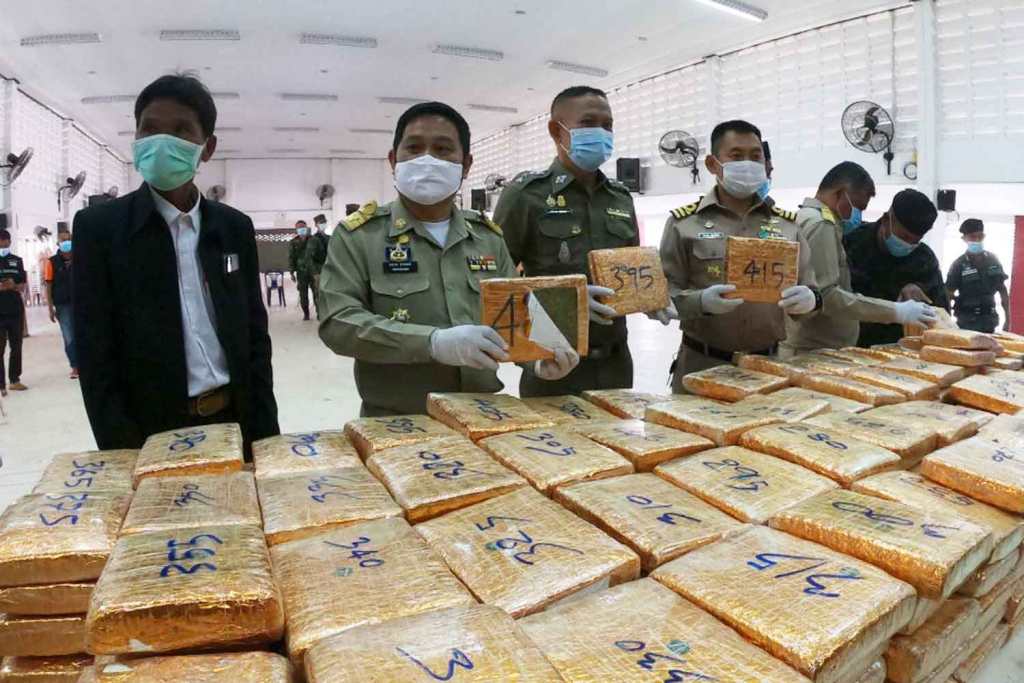 A combined government unit seized 484 kilograms of bricked marijuana in an operation on the bank of the Mekong river in That Phanom district late on Sunday night.

Samart Suwanmanee, the That Phanom district chief, said the action was taken with information supplied by defence volunteers in villages along the river.

Late on Sunday night, while the combined civilian-police-military unit was lying in wait on the Mekong river bank near Ban Sai Mun village in tambon Nam Kam, a long-tail boat was seen arriving with four to five men on board. The men then unloaded a number of black sacks onto the bank.

As members of the unit crept towards them, the smugglers sensed the movement and fled on the long-tail boat.

They abandoned 11 black sacks containing 484 packages of dried marijuana, each weighing 1kg, on the river bank.

More than 3 tonnes of marijuana have been seized after being smuggled across the river from Laos during the past three months, Mr Samart said.

Meth pills Seized on the Bank of Mekong River

On Feb 9th, a Royal Thai Navy Patrol has seized almost some 950,000 meth pills abandoned by a drug gang along the Mekong River in northeastern Thailand.

The Navy patrol found three sacks containing 954,000 methamphetamine pills on the Mekong River bank at Ban Paktuay village in Tha Uthen district in Nakhon Phanom on Tuesday morning. The seized drugs were estimated to be worth at least 100 million baht.

The seizure followed an investigation that smugglers had shifted the transit route of drug smuggling from the North to the Northeast during the Covid-19 situation and large quantities of drugs would be smuggled to border areas in the Northeast via the Mekong River.

Authorities believed the smugglers might have used long-tailed boats to smuggle the drugs and left them along the Mekong River bank before moving them into inner areas.

Patrols would be stepped up around the clock along border areas prone to drug smuggling, said senior officials.