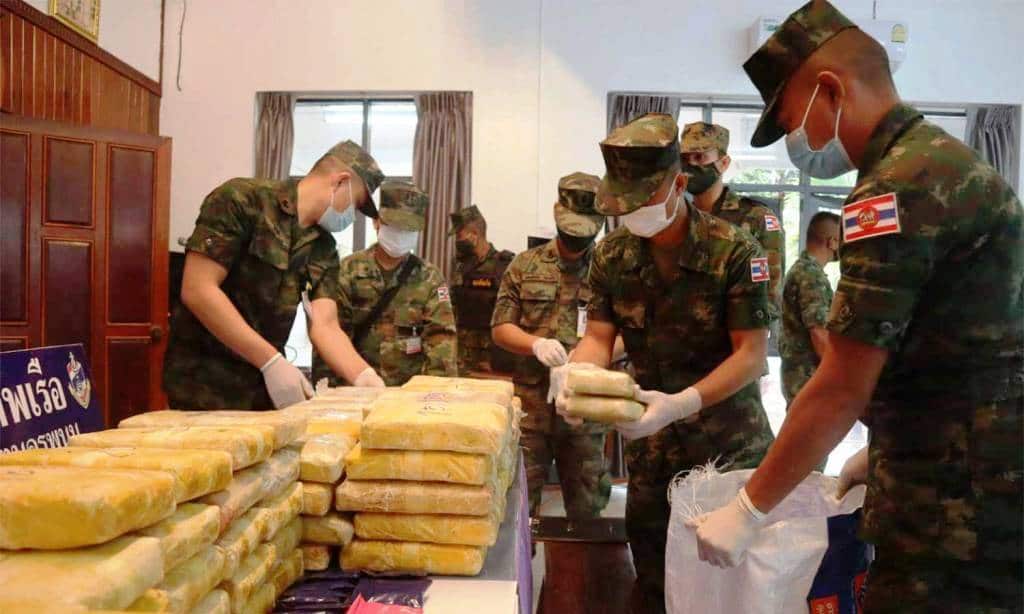 A Royal Thai Navy Patrol has seized almost some 950,000 meth pills abandoned by a drug gang along the Mekong River in northeastern Thailand.

The Navy patrol found three sacks containing 954,000 methamphetamine pills on the Mekong River bank at Ban Paktuay village in Tha Uthen district in Nakhon Phanom on Tuesday morning. The seized drugs were estimated to be worth at least 100 million baht.

The seizure followed an investigation that smugglers had shifted the transit route of drug smuggling from the North to the Northeast during the Covid-19 situation and large quantities of drugs would be smuggled to border areas in the Northeast via the Mekong River.

Authorities believed the smugglers might have used long-tailed boats to smuggle the drugs and left them along the Mekong River bank before moving them into inner areas.

Patrols would be stepped up around the clock along border areas prone to drug smuggling, said senior officials.

Over the past 2-3 months, more than 10 million speed pills were seized in this northeastern province.

Meanwhile, a man has been arrested in Chon Buri Province after a policeman was shot dead as he approached a group of people drinking alcohol at a petrol station in Suphan Buri early Monday morning.

He was charged with the fatal shooting of 52-year-old Pol Snr Sgt Maj Charnwit Ditcharoen of Suphan Buri police.

Pol Snr Sgt Maj Charnwit, 52, was shot at a PTT petrol station in tambon Suan Taeng, Suphan Buri, in the early hours of Monday as he went up to a group of young men who were drinking alcohol in a gathering in contravention of Covid-19 controls. One of the drinkers fired shots at him.

A .38 caliber bullet struck the back of his head, inflicting a grievous wound. He was later pronounced dead at a hospital. Police investigators concluded the shooter was Mr Sitthiphong, one of the men who was drinking at the petrol station.

Mr Sitthiphong was arrested at a relative’s second-floor apartment room. He allegedly admitted having fired the fatal shot at the officer, and said he was drunk at the time.

After the shooting, he hid the gun at his house and fled to Samut Sakhon, before taking a public van to go to his elder sister’s place in Sri Racha, he said. She was not at home, so he went to stay at another relative’s apartment room, where he was caught.

Hundreds of Elderly Scammed by Teachers in Northeastern Thailand