Father Bashes Wife, Son with Hammer Then Sets Their Bodies on Fire
Advertisement 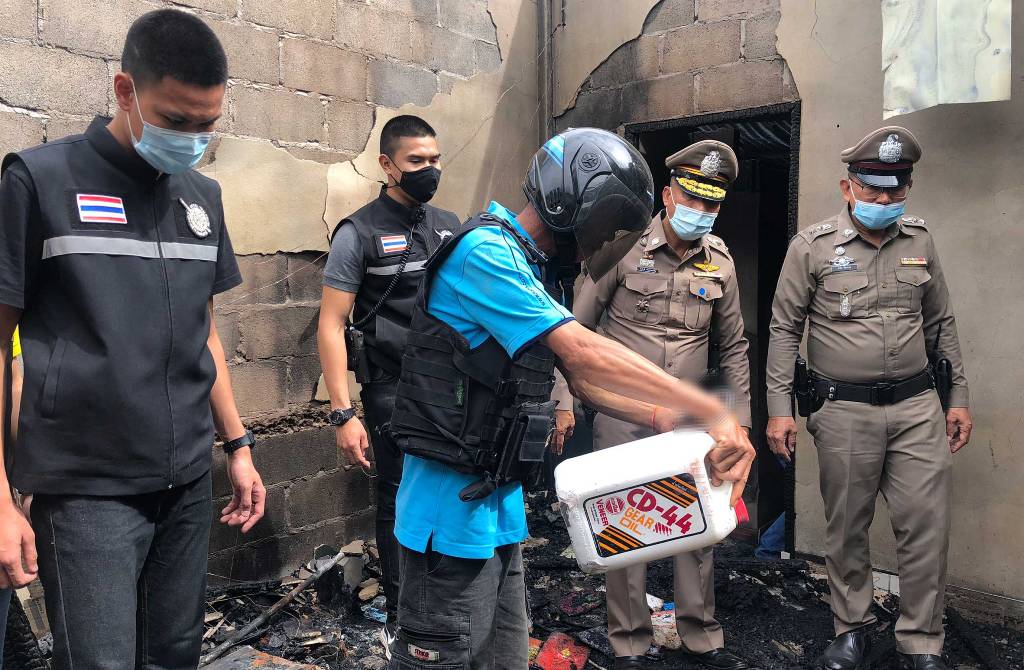 A man has been arrested after beating his wife and his 14-year-old son to death with a hammer and setting fire to their bodies and their home in northeastern Thailand’s, Nakhon Phanom on Thursday night.

He is also accused of chasing and attacking another woman with the hammer, before being overwhelmed and restrained by other neighbours.

Phan Thopa, 50, has been charged with with murder, arson and physical assault causing injury. He was taken back to the partially burned house by police for a re-enactment of the crime on Friday, the Bangkok Post reported.


According to police, Mr Phan admitted having beaten his wife Anon Seedawong, 48, and their son Ekkararat Thopa, 14, on their heads with a hammer. He then covered their bodies with blankets and clothing, poured petrol over them and then set their bodies on fire.

Mr Phan told police he had suffered mental problems for several years. He had not taken his medication for about three months. Pol Maj Gen Thanachart Rodkhlongtan, chief of Nakhon Phanom police, said they questioned the suspect and his relatives.

Mr Phan had suffered mental problems and had delusions about someone assaulting him, depriving him of his wife and his son and taking all his belongings, he said. He had not taken his medicine for more than 3 months and had been drinking heavily.

Mr Phan had attacked his wife with a hammer while she was doing housework on Thursday night. He then attacked his son with the same hammer. Son-in-law murdering his wife’s father with a shovel

Meanwhile, in Northern Thailand, a fight over family property ended with the son-in-law murdering his wife’s father with a shovel on Tuesday. Police called to the scene in Phrae province in northern Thailand found Prayoon Bamrungjit, 62, dead in a shack with a severe wound to his head.

Theerawut Chanmuen, 39, was also at the scene, waiting to confess his crime to police. He told them his father-in-law was an addict who was desperate for money to buy drugs. He had tried and failed to sell a family plot of land and was attempting to sell a cow instead, Theerawut told police.

The pair started arguing over the matter and Prayoon became enraged with his son-in-law for disagreeing with him.


His father-in-law grabbed a knife and charged at him, said Theerawut, who confessed to then hitting Prayoon five times with a shovel, killing him.

He was initially charged with intentional murder, though his family say he might act in self-defence.

Theerawut’s wife said she did not want to speak about her father, but added that her husband was not a hot-headed man.