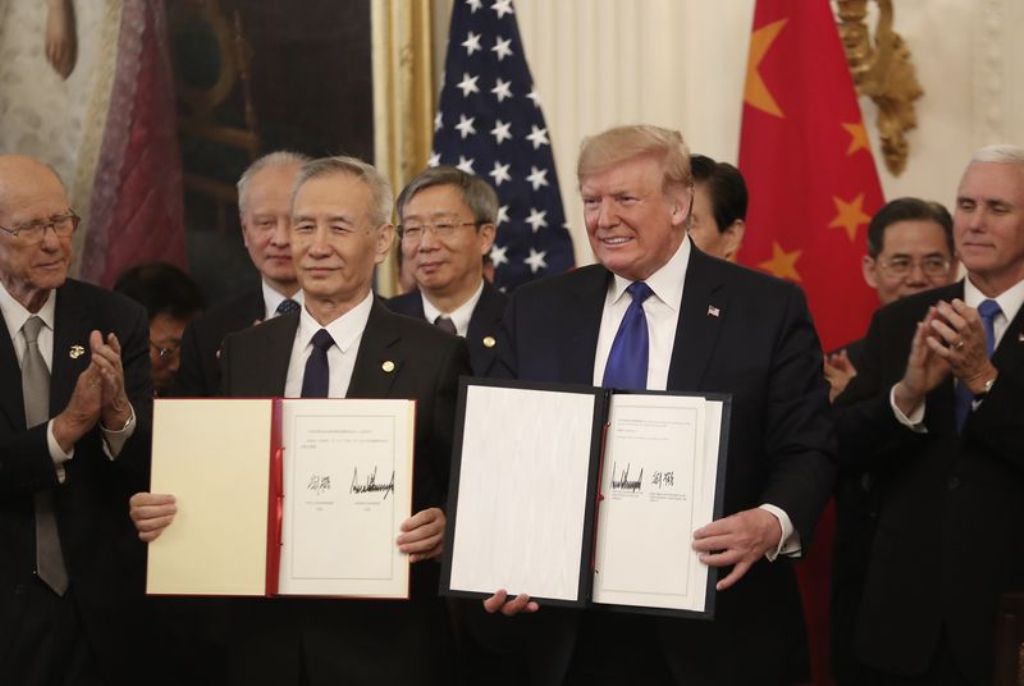 After nearly two years of conflict the U.S. and China have signed a momentous trade deal billed as the first phase of a broader trade pact. The deal commits China to crack down on the theft of American technology and corporate secrets.

The pact also outlines a $200 billion spending spree by China to try to close its trade imbalance with the U.S. It also binds Beijing into avoiding currency manipulation to gain an advantage. Furthermore it includes an enforcement system to ensure promises are kept.

The ceremony was held in a packed East Room at the White House. Which included President Trump, dozens of American business people, U.S. lawmakers and Chinese officials. It marked the latest friendship between the world’s two largest economies.

Acrimonious talks stretching back almost three years have roiled financial markets, cast a cloud of uncertainty over investment decisions and hurt growth in both nations.

“This is a very important and remarkable occasion,” Trump said. Fixing what he sees as the injustices of past trade deals is “probably the biggest reason why I ran for president,” he added. “Together we are righting the wrongs of the past.”

In a letter to Trump read out at the ceremony, Chinese leader Xi Jinping said the deal proved the two sides could work together to bridge their differences and declared it “good for China, the U.S. and the whole world.”

The deal is a boon to US President Donald Trump, a momentous trade deal that the US mainstream media has barley reported. Instead the have been infatuated with the House voting to refer articles of Trump’s impeachment to the Senate. Articles that were rushed through the house only to be stalled by the speaker of the house Nancy Pelosi.

China to spend 200 billion in Phase one of trade deal

The “phase one” agreement also includes pledges from China to beef up purchases of American crops and other exports for two years. It provides some protections for US technology, and new enforcement mechanisms that allow Washington to quickly impose penalties, which Beijing cannot respond to.

Beijing agreed to import an additional $200 billion in US products over two years, above the levels purchased in 2017. Before Trump launched his offensive, including an additional $32 billion in agricultural goods.

Washington said it will be monitoring the purchases. China will have to make sure that “nothing with tariffs or non-tariff barriers prevent that from happening,” officials said.

Soybean exports to China plunged to just $3 billion from more than $12 billion in 2017. The Trump administration has paid out $28 billion in aid to farmers in the last two years.

Meanwhile, the new pact has already been criticized by the Democrats and liberal media for what is missing. It does nothing to address claims of China’s state-backed hacking of American companies and government institutions.

Nor does it require the China to reform its vast web of state subsidies. That form the spine of its state capitalism model and have helped fuel the growth of Chinese companies internationally.

The Trump administration says many of those issues will be covered in a second phase of a deal. When those talks will begin and how long they will take remains uncertain. In the meantime, the Trump administration is also set to maintain tariffs on roughly two-thirds of imports from China. Something that Trump said was essential as leverage over the country until it agreed to further reforms.