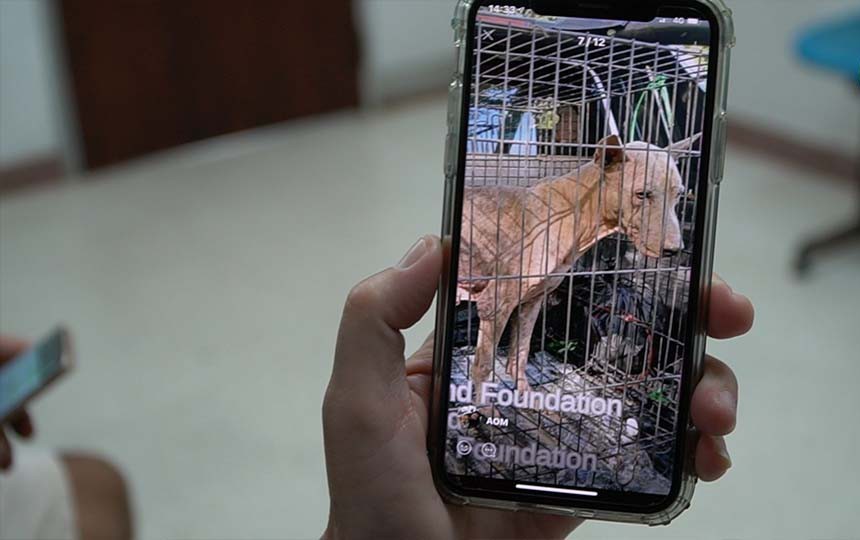 Watchdog Thailand a non-profit organization has rescued 50 Watchdog Thailand from an alleged puppy mill run by a 73 year-old American man.  Most of the dogs are found in terrible conditions and many had died from illnesses or starvation.

The owner American James Sterling claimed the dogs were kept as pets and he was not breeding them for sale. However evidence indicated otherwise. The Thai Ridgeback dogs were found in tiny cages were stacked on top of each other.

The dogs had no space to play or exercise. Their waste was everywhere, and some were still left where they had died.

According to Thai Residents Watchdog Thailand representatives went to Chiang Mai police to file animal cruelty charges against the 73 year old American.  They claim has Sterling has been breeding Thai Ridgebacks to sell and export to buyers abroad.

Sterling said he contacted Watchdog himself asking for help. Claiming that he had become to ill and could no longer take care of his “Pets” – more than 50 dogs.

Watchdog went the location and discovered the dogs living in extremely unhygienic conditions. Most had scabies and were starving. They immediately contacted the police and the Chiang Mai Department of Livestock and Development.

Officials were then sent to rescue the Thai Ridgeback dogs and move them to the Save Elephant Foundation in Mae Rim, Chiang Rai. Upon arrive Sterling refused to give up 5 dogs that were still healthy.

The foundation disagreed with his demands saying they believed he lacked the ability to take care of the dogs.

History also shows he has been involved in animal cruelty to his own pets many times. Watchdog realized that they needed police involvement in the case to help save the remaining 5 dogs.

Watchdog Thailand told Chiang Mai police that Sterling lived alone and was currently ill. He asked for help from a foreign volunteer at Watchdog who then passed the information to the organization.

Furthermore animal lovers from abroad have given information on Sterling. They stated that he has a past in animal cruelty and his dogs were mistreated or left to die after they served no purpose.

According to his Facebook Page Sterling has been selling dogs for a long time.  Watchdog Thailand says he has been doing so without any proper license to breed dogs. Now Watchdog wants to bring all the dogs into their care.  The Chiang Mai Department of Livestock and Development agreed stating Sterling was incapable of taking responsibility for the remaining 5 dogs.

Sterling told authorities that he contacted Watchdog for help and he has never bred dogs for sale but they kept on having puppies. He has also filed a report with the police claiming that Watchdog stole his dogs.

Calling All Cat Lovers – We Need Your Help

Thailand is home to a large number of stray cats who, sadly, haven’t had the best start in life. Many of them are riddled with parasites, viruses, and also other infections.

Unfortunately, they often don’t get the vet attention that they desperately need.

The number of soi cats in Thailand is continuously on the rise. Back in 2017, it was estimated that Thailand had 860,000 stray cats and dogs. To put this into perspective, that is about half the population of Chiang Mai.

The problem is… cats also have a lot of cats! Every year, cats can have up to 4 litters with approximately 4 cats each. When you start adding up what happens when those cats have cats, the numbers become quite scary.

This is where Adopt Meow comes in! Through vet visits, rescue missions, adoptions, and the TNR program, Adopt Meow is helping save the lives of soi cats throughout Chiang Mai.

Here is an overview of what Adopt Meow does in Chiang Mai:

They have rescued hundreds of kittens and cats. More often than not, they will need some kind of medical care. Adopt Meow is always raising funds and accepting donations to cover these medical bills.

If you’re looking for a new feline companion, look no further! They have many cats under their care and are always rescuing new kittens. Feel free to browse through the lovely bunch here: