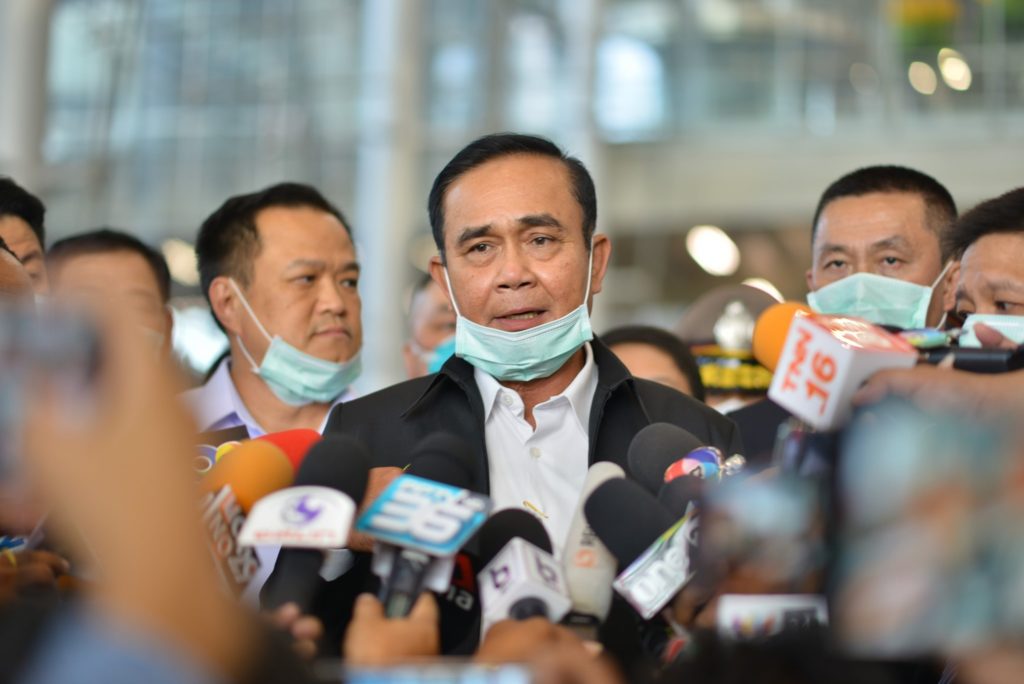 Thailand’s Prime Minister told reporters yesterday Thailand has not opened its door to welcome foreign tourists yet and people should not panic. Gen. Prayut Chan-o-cha said that the Center for Economic Situation Administration discussed many measures to help people from the impacts of the covid-19 coronavirus.

The measures included a 400-billion-baht rehabilitation budget, 100 billion baht of which was spent.

The prime minister also said the center was considering how to spend the rest of the budget including soft loans for small and medium-sized enterprises. Also giving money to create jobs for the students who will graduate this year and the people who lost their jobs in 2019 and 2020.

Regarding tourism promotion, the prime minister said the government  only focused on domestic tourism. More hotel rooms were booked but the reservations. However this could not make up for the disappearance of foreign tourists.

He said, the government was not allowing in foreign tourists and people should not panic as it prioritized public health. The prime minister also thanked everyone for cooperating with disease control measures which resulted in Thailand having been free of local COVID-19 infection for 100 days.

100 Days with No Covid-19 or Foreign Tourists

Thailand has reported zero locally-transmitted Covid-19 cases for 100 days in a row. Joining a small group of places like Taiwan where the pathogen has been virtually eliminated.

The country hasn’t recorded any community transmission since May 26. Data from the Health Ministry on Wednesday showed. Authorities are still finding infections among returnees and migrants arriving at borders. However these people are quarantined and only allowed into the community after they’re recovered.

Thailand’s success has relied on strictly-policed borders that have been closed to foreigners for months. The strategy has come at great cost to people’s livelihoods. With its iconic beaches and cultural sites making it one of the most tourism-reliant economies in the world.

That makes the milestone a bittersweet one for the country. Prayut’s government is under growing pressure from business to re-open the borders to save the ailing tourism sector. Which accounted for 20% of Thailand’s pre-pandemic economy. The government has in principle agreed to open to tourists again ahead of winter. However Prayut has yet to release many details about how he will do so safely.

“We contained the virus, and now is really the time to focus on the economy — the longer we close the borders, the more damage it will have,” said Somprawin Manprasert, chief economist at Bank of Ayudhya Plc in Bangkok. “Without proper policies, the exit of some businesses and work forces could cut the country’s long term growth by 0.5% each year, which is significant for a country that’s also rapidly ageing.”

Thailand’s dilemma illustrates the difficult balance governments across the world are trying to strike between public health and economic survival. While many countries quickly shut down to curb the virus’s spread earlier this year.

The economic fallout soon became too much to bear, and places from the US to India pushed to re-open despite the virus continuing to run rampant, fueling new spikes of infection.