Water Buffaloes Cause Head on Collision in Northeastern Thailand
Advertisement 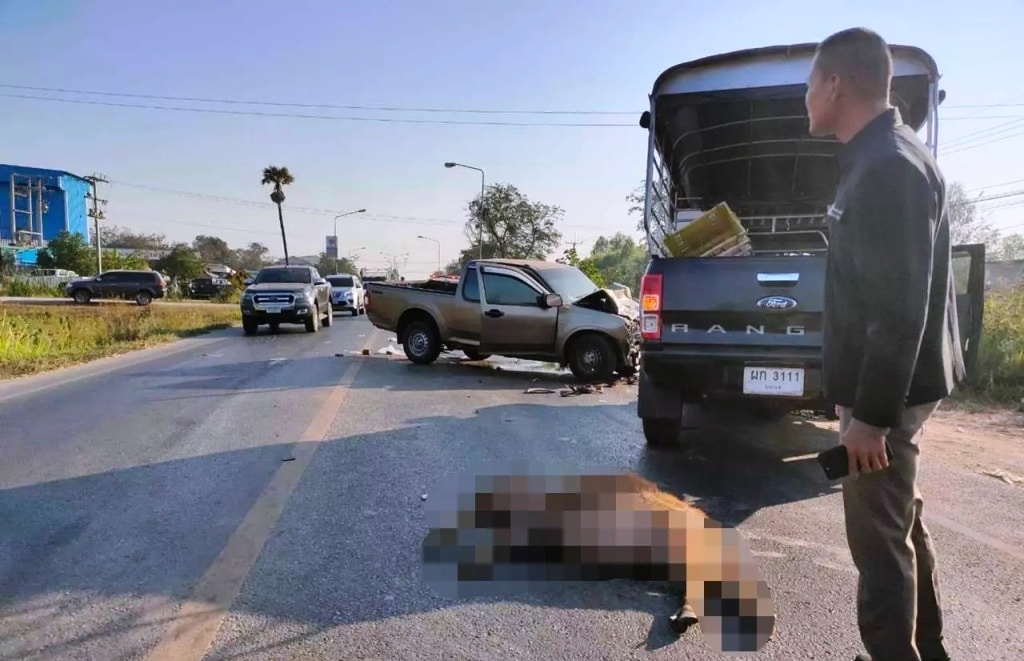 According to witnesses, a mother buffalo and her male calf ran out in front of a Ford Ranger heading for Khok Phochai district from Macha Khiri. The pickup hit the two buffaloes before swerving across the middle line and colliding with an oncoming Isuzu. Both pickups were badly damaged.

Surachai Juchang, 54, the driver of the Ford Ranger, from Chaiyaphum’s Kaeng Khro district, was slightly injured.

In the Isuzu pickup, Sompong Butsrikham 53, the driver, and his woman passenger, Yuanchai Chanasabaeng, 54, both from Khon Kaen’s Nam Phong district, were also injured.

All three were taken to Mancha Khiri Hospital. The mother buffalo was slightly injured and ran away into a rice field. The calf, about 6 months old, was killed and left lying in the middle of the road. Police were also trying to identify the owner of the buffaloes, who is liable for the damage.

Man Arrested for Stealing from the Dead

Meanwhile, a man posing as a fake rescue worker was caught stealing from the victims of a fatal crash in northeastern Thailand. Consequently he pretending to be helping rescue workers to steal valuables from the deceases victims.

During the rescue, police arrested a man who stole valuables from the dead and injured victims, while mingling with the rescuers and pretending to be helping them.

A blue Isuzu pickup heading north from Bangkok, swerved over the median and crashed into a brown Nissan pickup travelling in the opposite direction. The collision occurred on the Bangkok-bound side of the highway.

A man and a woman were found dead in the blue Isuzu. Another passenger was thrown out of the vehicle and was seriously injured. The three men in the other pickup, including the driver, were seriously injured and were rushed to Sung Noen Hospital.