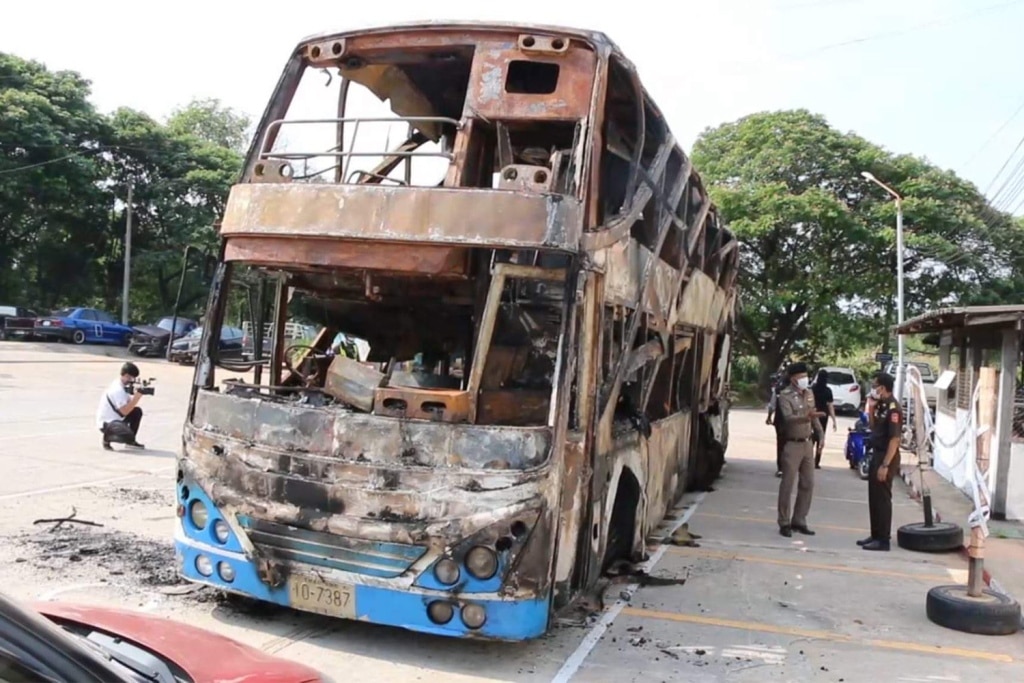 The driver of a double-decker bus that burst into flames early on Tuesday, killing five passengers and severely injuring 12 others, has been charged with reckless driving causing deaths and negligence.

The fatal fire occurred about 12.30am on Tuesday on the Mittraphap highway in Ban Haet district, shortly after the Bangkok-bound bus, with 33 passengers on board, left the Khon Kaen terminal.

Pol Col Thanomsak said three women, a young girl and a man died in the flames.

Bus victims family to be compensated

Pol Col Thanomsak said relatives could claim the bodies at Srinagarind Hospital’s forensic medicine department. They could also contact Ban Haet police station and ask for documents for use in claiming compensation.

Officials from the Office of the Insurance Commission had arrived to examine the damaged bus and begin compensation procedures.

The bus is owned by 407 Pattana Company and was insured through Viriyah Insurance Plc. Initially, compensation  payable for each dead victim is 1.5 million baht, and another 500,000 baht under the Road Accident Victims Protection Act of 1992.

The Ban Haet police chief said the cause of the fire was still being investigated, pending examination of the vehicle by experts from the Land Transport Department.

The double-decker bus departed from Bung Kan province early on Monday night and took on extra passengers at Udon Thani before proceeding to Khon Kaen.

The driver told police he heard what sounded like a rear tyre bursting as he drove through Ban Haet district, and then a wheel caught fire. The flames spread to the engine compartment and the entire bus was soon ablaze.