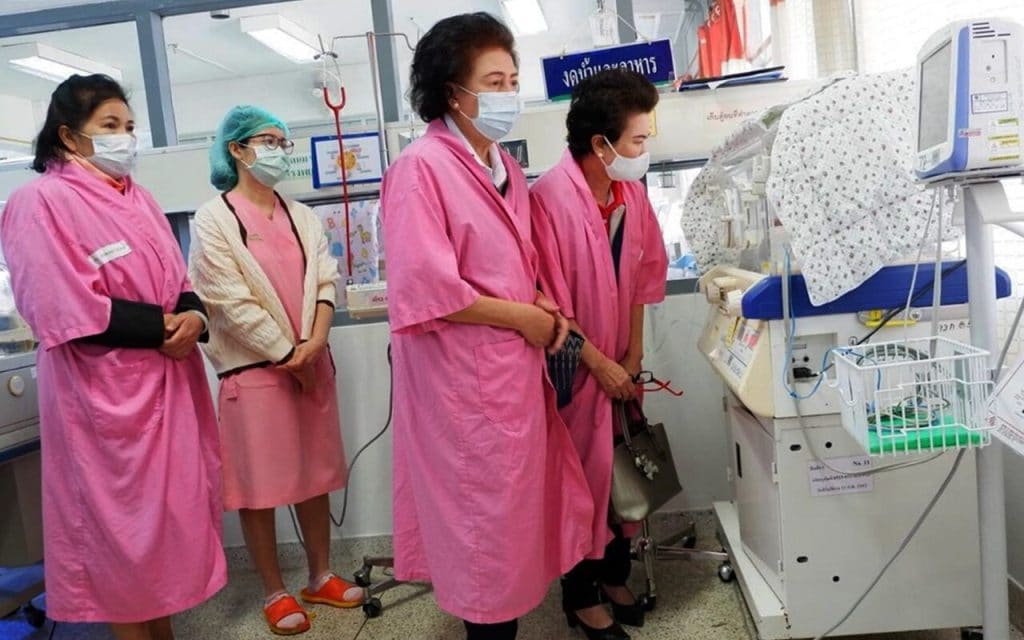 A woman has given birth to a health baby girl with 4 arms and 4 legs in northeaster Thailand’s Nakhon Phanom province.  Doctors at the Hospital report the baby girl is strong but they are keeping a close eye on her to make sure.

The governor of Nakhon Phanom, Kaisakorn Kongchalad has given orders for health officials to provide support to Tiwanee  the 22-year-old mother.

This is Tiwanee’s 2nd daughter but this time her newborn has 4 arms and 4 legs and weighs 6lbs, 9oz. Other parts of her body are normal and she can breathe on her own doctors at Nakhon Phanom Hospital told Thai Media.

The baby girl was born by C-section at 16.00 on 16 December 2020. The family named her “Pawida” but they are still coming up with her nickname.

The Nakhon Phanom Hospital has since transferred the baby to Srinakharin Hospital Sukhumvit in Khon Kaen Province for further tests, and above all to assure the baby girl remains healthy.

Prior to the baby girls birth Tiwanee went to a local health clinic for antenatal care in the province. She was given an ultra sound but the medical personnel at Nakhon Phanom Hospital found nothing uncommon about her pregnancy.

When it was near the time of birth Tiwanee went for a final check-up at the Tha Uthen Hospital. The hospital found that the baby had 4 arms and 4 legs. The mother was then transferred to Nakhon Phanom Hospital where she received care from the pediatricians.

The baby is under medical care until it is confirmed safe to leave the hospital.

In 2019 a baby was born in India with similar conditions. The baby was called an octopus baby with 4 legs, 4 arms, and 3 hands that covered her body.

The doctors stated the baby was originally a part of a set of triplets that became conjoined. The remaining baby was a healthy male and the octopus baby had minor breathing issues.

Mother Raju Gurjar, 24, and her husband are both labourers and were expecting their first child.

Dr. Rohitesh Meena, the surgeon who delivered the babies has said the woman gave birth naturally to the twins. The male child is normal but the female is a case of confined twins the doctor said.

A team of doctors led by Dr. KK Arora, Head of the pediatric department of Maharaja Yashwant Rao Hospital, a government hospital in Indore successfully carried out a operation to remove the babies extra appendages.