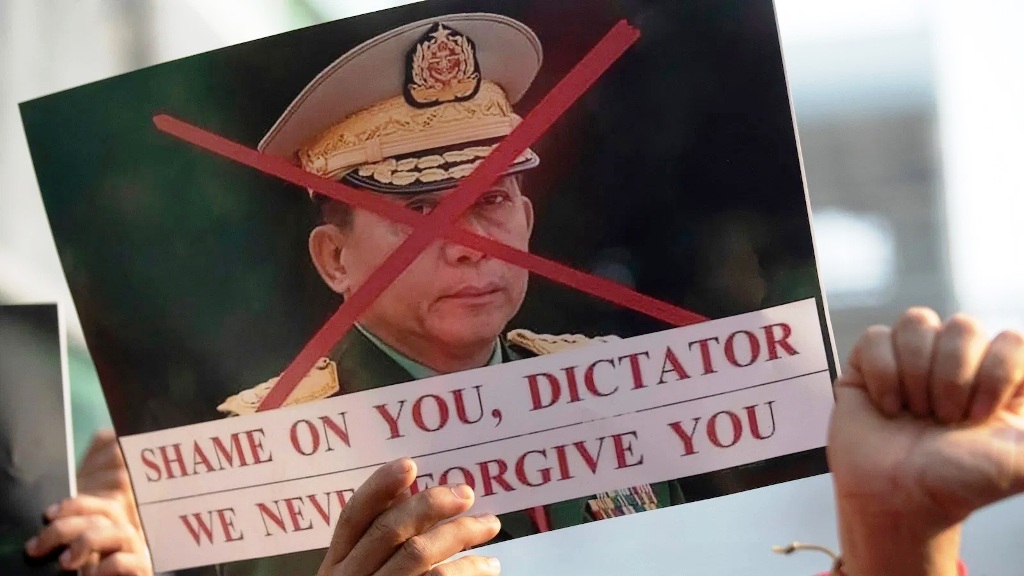 Myanmar’s military Junta has rebuffed a plan by Southeast Asian leaders ASEAN to help end violence in the country. Saying yesterday any “suggestions” by ASEAN would need to fit with the junta’s stated roadmap and only come after “stability” is restored.

Leaders of the 10-member Association of Southeast Asian Nations ASEAN, including coup leader Gen Min Aung Hlaing, appeared to reach a five-point “consensus” on Myanmar during a special summit in Jakarta on Saturday. The consensus  included an “immediate cessation of violence” following the military takeover on Feb. 1.

It also said the bloc would appoint an envoy to mediate talks between “all parties” in Myanmar, Bloomberg reports.

But in a press release on Monday, the military’s State Administration Council only said the “suggestions” made by ASEAN leaders “would be positively considered” if they facilitate the Junta’s own platform and “served the interest of the country.”

“Myanmar informed the meeting that it will give careful consideration to constructive suggestions made by Asean leaders when the situation returns to stability in the country since priorities at the moment were to maintain law and order and to restore community peace and tranquility,” the junta said in the release, which was also presented to the Asean Secretariat in Jakarta.

The Myanmar statement lowers expectations that the dialogue process will prompt the military to release Aung San Suu Kyi and other detained civilian leaders, or alter a plan to hold a fresh election in early 2022 following a yearlong period of emergency rule. The move to appoint a special envoy is unusual for Asean, which traditionally has avoided direct interventions into domestic political disputes, and had been welcomed by Myanmar’s opposition.

On Tuesday, an armed ethnic group in Myanmar known as the Karen National Liberation Army seized a military outpost near the Thai border in a sign civil conflict will continue even as the junta pledged over the weekend to end the violence.

Since overthrowing the civilian-led government, the junta has killed more than 750 protesters throughout the country with nearly 3,500 others detained or sentenced to prison, according to the Assistance Association for Political Prisoners.

There was no immediate comment on Tuesday’s attack from the Myanmar military.

Saw Taw Nee said more than 30,000 residents have fled to safe zones since the national army, or Tatmadaw, conducted deadly air strikes in March. At the time, fighter jets came out in retaliation for an attack by the group on a military base in which 10 soldiers were killed and another eight were captured.

Earlier this month, close allies of Myanmar’s detained civilian leader Aung San Suu Kyi joined with ethnic groups to form a new unity government, escalating the chances of a prolonged conflict with the junta. As part of its formation, members were also pushing for the formation of a union army to take on the military. Saw Taw Nee said at the time that such an army is “essential,” though it would take time as negotiations are ongoing.

“The junta is making people live with fear in the mainland as well as in KNU-controlled areas,” he said. “We, the KNU, accept forming the federal army in principle, but it is not realistic it will be formed in a short period of time.”

“Only when the rights we are asking for can be guaranteed will the federal army become a reality,” he said.