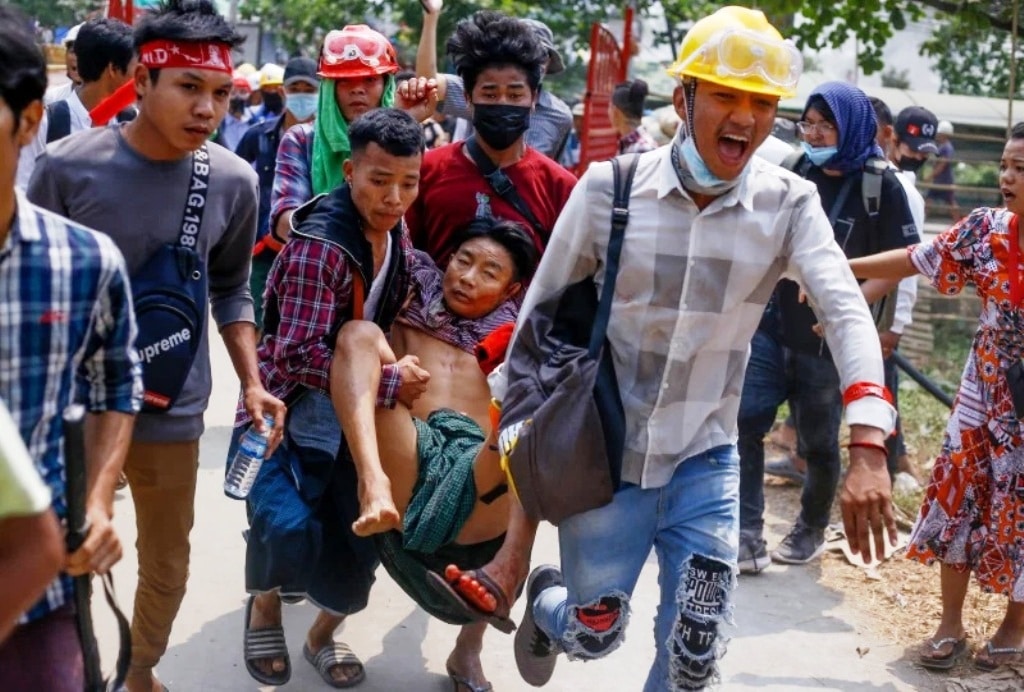 Myanmar armed forces killed 114 people, including some children as young as five, in a brutal crackdown on coup protesters on Saturday. It was the bloodiest day of violence since last month’s military coup.

Military jets also launched air strikes on a village in territory controlled by an armed group from the Karen ethnic minority and at least two people were killed, a civil society group said.


Earlier, in Shan State the Karen National Union (KNU) said it had overrun an army post near the Thai border, killing 10 people . The dead included a lieutenant colonel. TheKNU said they lost one of its own fighters as tensions with the the Myanmar Army surged after years of relative peace.

Myanmar’s General Min Aung Hlaing, the junta leader, said during a parade to mark Armed Forces Day that the military would protect the people and strive for democracy.

Demonstrators turned out on Saturday in Yangon, Mandalay and other towns, as they have done almost daily since the Feb. 1 coup that ousted elected leader Aung San Suu Kyi.

The Myanmar Now news portal said 114 people were killed across the country in crackdowns on the protests.

At least 40 people, including a 13-year-old girl, were killed in Mandalay, and at least 27 people were killed in Yangon, Myanmar Now said. A boy as young as five was earlier reported among the dead in Mandalay but there were conflicting reports later that he may have survived.

Another 13-year-old was among the dead in the central Sagaing region.


“Today is a day of shame for the armed forces,” Dr. Sasa, a spokesman for CRPH, an anti-junta group set up by deposed lawmakers, told an online forum.

A military spokesman did not respond to calls seeking comment on the killings by security forces, the air strikes or the insurgent attack on its post.

“They are killing us like birds or chickens, even in our homes,” said Thu Ya Zaw in the central town of Myingyan, where at least two protesters were killed. “We will keep protesting regardless… We must fight until the junta falls.”

The deaths on Saturday would take the number of civilians reported killed since the coup to over 440.