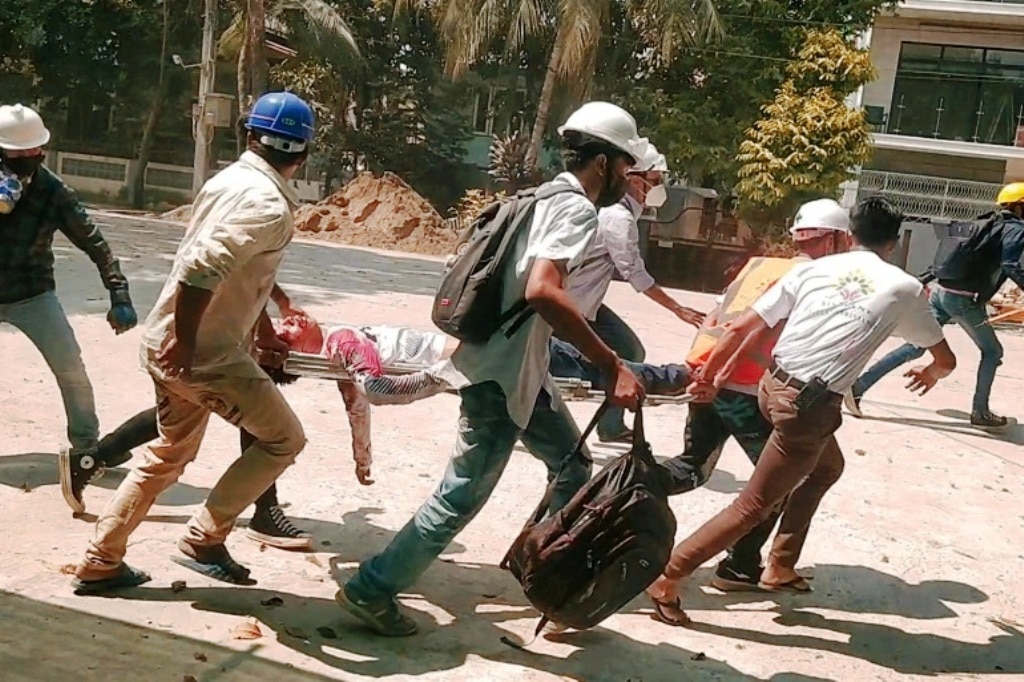 The violent crackdowns have drawn the condemnation of Western governments and increasingly the unprecedented criticism of some of Myanmar’s Asian neighbours, however none of the Western Governments nor ASEAN countries have done anything to end the brutal crackdowns.

The violence has also forced people determined to resist a return to military rule to think up new ways to make their point. Nearly 20 protests were held overnight across the country, from the main city of Yangon to small communities in Kachin State in the north and the southernmost town of Kawthaung, according to a tally of social media posts.

Hundreds of protesters in the second city of Mandalay, including many medical staff in white coats, marched before sunrise in a “Dawn protest”, video posted by the Mizzima news portal showed.

Protesters in some places were joined by Buddhist monks holding candles. Some people used candles to make the shape of the three-fingered protest salute.

In Yangon, which has seen the worst of the violence since the coup, security forces moved quickly to break up a gathering.

“Now they’re cracking down on our night protest. Stun grenades being fired constantly,” one Facebook user wrote. Eight people were detained, a resident of the neighbourhood said.

The spokesman for the junta was not available for comment but has previously said security forces have used force only when necessary.

At least four people were killed in separate incidents earlier on Saturday, taking the death toll since the coup to 247, according to the Assistance Association for Political Prisoners activist group.

Condemnation of Killings in Myanmar

Western countries have repeatedly condemned the coup and the violence. Asian neighbours, who have for years avoided criticizing each other, have also begun speaking out.

Indonesian President Joko Widodo, in some of the strongest comments yet by a regional leader, said on Friday the violence should stop immediately. He called for an urgent meeting of ASEAN, of which Myanmar is a member.

Malaysian Prime Minister Muhyiddin Yassin backed the call saying he was appalled by the persistent use of lethal violence against civilians. Singapore has also expressed disapproval.

But the military has shown no sign of being swayed and has defended its takeover, which derailed a slow transition to democracy in a country that was under strict military rule from a 1962 coup until the generals initiated reforms a decade ago.

The junta says a Nov. 8 election won by Suu Kyi’s party was fraudulent, an accusation rejected by the electoral commission. The military leaders have promised a new election but have not set a date.

Coup leader General Min Aung Hlaing on Saturday visited the Coco islands, about 400 km (250 miles) south of Yangon, and explained to military officers and nurses why he had seized power, the state broadcaster reported.

The islands are near some of the world’s most important shipping routes, in waters where China and India seek to project their power. Neither of the Asian giants has spoken out strongly against the coup and the violence.

Min Aung Hlaing had earlier in the day explained his coup to officers and nurses in the southern town of Myeik, state media said.

Suu Kyi, 75, faces accusations of bribery and other crimes that could see her banned from politics and jailed if convicted. Her lawyer says the charges are trumped up.