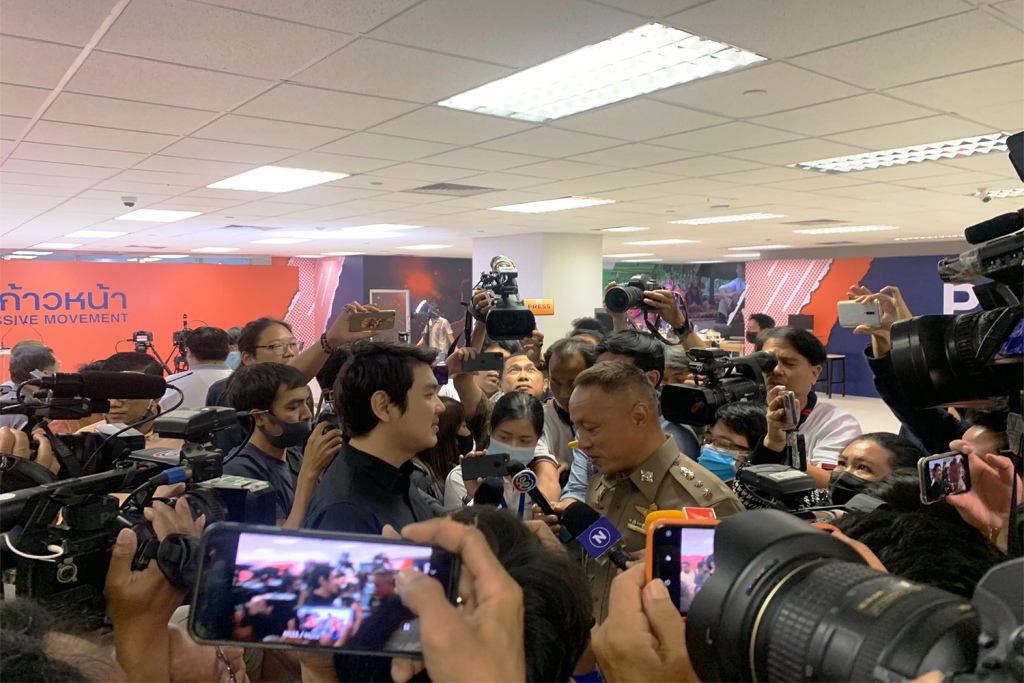 Thai Police officers appeared at the Progressive Movement office on Friday afternoon with a search warrant, interrupting a press conference called by Piyabutr Saengkanokkul. Bangkok police, from Makkasan station, walked into the press conference room at the Thai Summit building.

They were armed  with a search warrant issued under the Prime Minister’s state of emergency.

At the time, Mr Piyabutr was at the podium speaking against the state of emergency. Furthermore the legal action taken against protesters  accused of causing harm to Her Majesty the Queen.

“I am here to check on law and order within my jurisdiction,” a police officer said.

The police officer walked out of the press conference room, and then returned to talk with Mr Piyabutr. He is the co-founder of the political movement. Their talk was continuing at time of this press release.

Mr Piyabutr urged the police officers to stay with the people, instead of following orders from the Prime Minister.

The emergency decree,  formally approved by the cabinet on Friday, bans meetings of more than four people. It also gives authorities power to ban any action deemed to be causing a public disturbance.

Demonstrators online will be arrested Thai Police have warned that people will be arrested if they take part in demonstrations prohibited by the state of emergency, or if they post illegal messages online. Pol Maj Gen Yingyot Thepjamnong, the Thai police spokesman, said on Friday that law enforcement was being intensified against Bangkok demonstrators who broke the law.

“Legal action can be taken retroactively. It will be done in compliance with human rights and international principles,” he said.

Pol Maj Gen Yingyot said seven demonstrators were arrested at the Ratchaprasong intersection political demonstration on Thursday night. Rally leader Panupong Jadnok, aka Mike Rayong, had not been arrested, but was being followed by detectives.

Pol Col Siriwat Deepor, deputy spokesman, said people who post information online that is false, affects security or leads to uncontrolled violence will be considered in violation of the state of emergency and the Computer Crime Act. They were liable to a prison term of up to five years and/or fine up to 100,000 baht.

According to Thai Lawyers for Human Rights, 51 people were arrested during demonstrations this week.