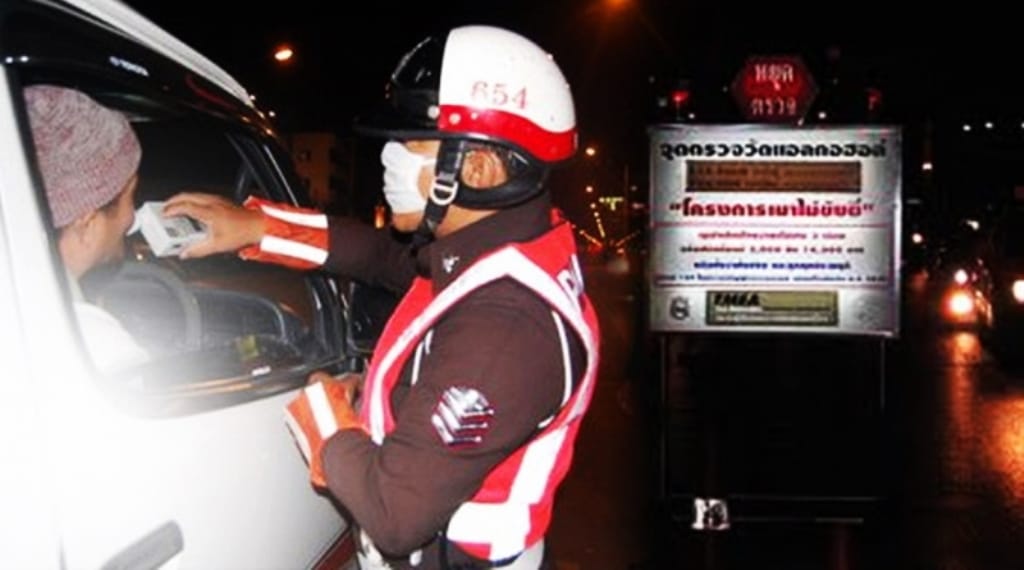 Police have again suspended use of drunk driving road safety checkpoints citing the need to concentrate on stopping the spread of Covid-19. The order was signed by deputy police chief Pol Gen Damrongsak Kittiprapas, on behalf of the national police chief, and is effective from April 18.

This was an abrupt about turn after Pol Gen Damrongsak announced on March 31 that the police chief, Suwat Jangyodsuk, had issued a directive that drink-driving checkpoints would resume operations nationwide as of April 1, under strict new guidelines.

Their use was suspended in October last year, soon after Pol Gen Suwat took office. He promised their operations would be made more transparent.

Pol Gen Damrongsak said the new order is for all police units to study directives issued under Section 9 of the emergency decree, including the one declaring 18 provinces as  maximum control areas and 59 provinces as control areas, to stem the latest Covid-19 wave.

Police units were to place emphasis on monitoring gatherings and activities deemed of high-risk of spreading the virus.

The order said checkpoints for alcohol tests and strict enforcement of traffic laws were to be  suspended, especially in areas of maximum covid-19 control. Checkpoints for crime prevention, drug interception and border security could continue to operate, but they must not cause the public too much inconvenience.

Police must also cease social activities for entertainment purposes. Traditional ceremonies  could be held, but should have adequate disease control measures in place.

While working, police must strictly follow disease control measures such as wearing face masks at all times. They must have their temperature taken before going out to work,  practice social distancing and use ThaiChana and MorChana apps.

They should also refrain from misconduct, such as heavy drinking and frequenting venues deemed at high-risk of spreading disease, the order said.

Meanwhile, Thailand’s road safety center reported that drunk driving was the main cause to road accidents and death during the Songkran holiday. More than 3,700 drivers have been caught driving under the influence (DUI) during the first five days of the long Songkran holiday.


The Department of Probation reports that from April 10 to 14, a total of 3,741 drivers were handed suspended sentences for DUI offences.

“Defendants in 3,730 DUI cases had consumed alcohol, while in the other 11 offenders had taken narcotic substances,” a probation department official told CTN News.

April 14 saw the highest number of drunk driving cases at 1,648.

The total annual death toll, over recent years, is between 21,000 – 24,000, making Thailand one of the worst in the world (currently #5 in the world according to World Health Organization data).

Academics caution that this figure only relates to those who die at the scene, and the actual death toll is far higher when when all all data is collated, and when victims succumb to their injuries after leaving the accident scene.