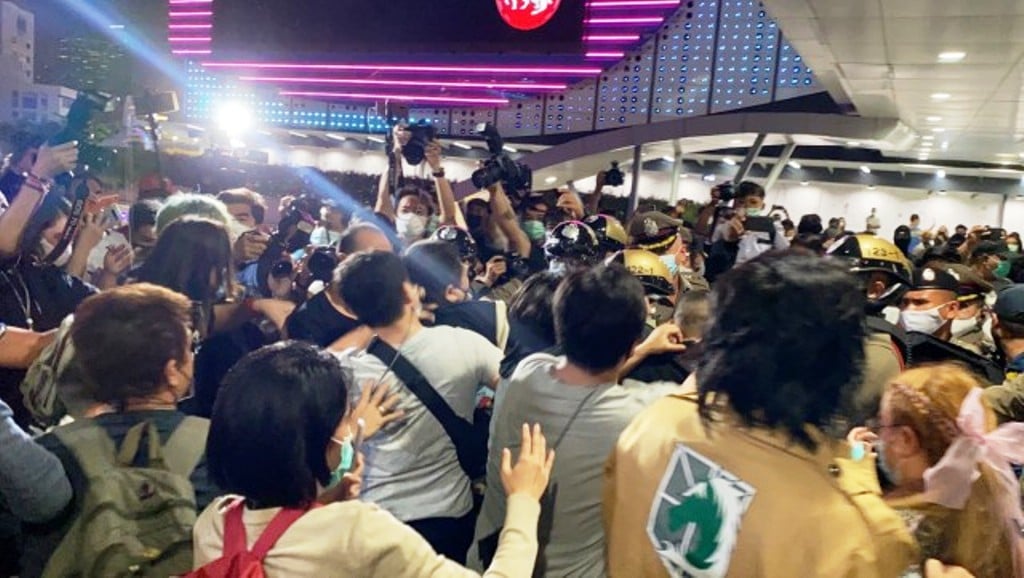 The demonstrators gathered outside the police station after marching from the rally at the downtown intersection in the biggest pro-democracy rally this year so far. Police arrested 10 people at Pathuwan intersection. Some were later released.

Protest leader Panusaya “Rung” Sithijirawattanakul announced the march and led the rally to the police station, which is about one kilometre away.

Pol Maj Gen Piya Tawichai, the Metropolitan Police Bureau deputy commissioner, warned on Wednesday that the rally violated the emergency decree as the gathering could spread the coronavirus.

Panupong Jadnok, another protest leader, said the detention of the four activists at Bangkok Remand Prison on Tuesday will not affect demonstrations. Ms Panusaya announced the end of the rally at around 9pm after all protesters detained earlier had been released. Anti-government protest groups have vowed to intensify their protests and lead two million people to rally this year against the government of Prime Minister Gen Prayut Chan-o-cha, who seized power in a bloodless coup in 2014.

Panusaya “Rung” Sithijirawattanakul, one of the key protest leaders announced the plan including the goal of two million protesters a day after a Bangkok court sent four of their leaders into pretrial detention on royal defamation charges. They have not been released and have been denied bail.

She also asked her supporters to keep a close watch on the censure debate scheduled from Feb 16-19.

Activists on Wednesday gathered at Pathumwan intersection for a second consecutive day to demand the immediate release of anti-government protest leaders. She warned the refusal of bail is a sign authorities are adopting a confrontational stance, she said.

About 1,000 protesters gathered and called for the release of the four protest leaders, who are Parit Chiwarak, Arnon Nampa, Patiwat Saraiyaem and Somyot Prueksakasemsuk. Activists occupied the road and the skywalk in front of the MBK Centre amid tight security from crowd control police officers. The anti-government protesters booed the officers and beat pans and pots that they had brought with them as their version of “weapons.”

Adopting the belief of the Myanmar people that banging pots can dispel evil spirits, core protest leader Panupong Jadnok added that they use empty pots because they are now too impoverished to buy rice.

Besides releasing their leaders, the protesters insisted on the three demands they have mentioned in previous protests: the resignation of Prime Minister Prayut Chan-o-cha, charter change and reform of the monarchy.

Ten protesters, including two minors, were arrested and released on Wednesday. The two were released on bail of 5,000 baht each, Ms Panusaya said.

While the protest started around 4pm, the protesters at around 7.30pm marched to Pathumwan police station to demand their release. At about 8.20pm, explosion sounds were heard three times in Chula Soi 5, behind the police station. Chaos ensued but nobody was hurt. A teargas cartridge was found later. The protesters dispersed around 9pm.

The deputy spokesman said water cannons were on standby nearby but whether they would be used or not depended on the severity of the situation. The deputy Bangkok police chief said the protesters had asked for permission to rally until 9pm.