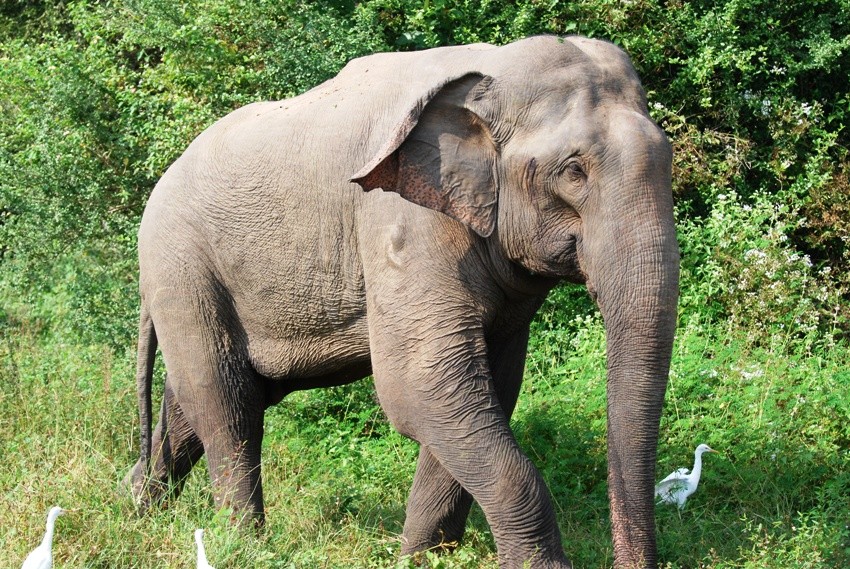 A a domesticated bull elephant chained alongside a canal has stomped a man collecting vegetables to death in Southern Thailand. The tragic event happened in Nop Phi Tham district of Nakhon Si Thammarat province.

The man battered body was found by worried relatives near a canal late on Monday night.

Police and rescue workers called to the scene said the 61-year-old was found in dense grass alongside the canal. He suffered multiple broken bones. His tricycle-cart was nearby, and so was a chained bull elephant.

The animal was apparently in musth, which is an annual hormonal cycle that naturally occurs in adult male elephants. The male elephants testosterone increases significantly, which has huge impact on their behavior. Musth also causes male elephants to become very aggressive.

Relatives told police that Somsak left home on Monday evening on his tricycle to collect vegetables for a meal. When night fell and he had not returned worried relatives went looking for him.

They found his tricycle near the canal and discovered his body in the long grass.Police said it appeared man had been attacked by the bull elephant while collecting vegetables.

After an autopsy to confirm the cause of death his body would be returned to relatives for funeral rites.

Police Investigators would find the owner of the elephant, who would face legal action.

Meanwhile, Thailand’s Cabinet approved a budget of Bt435.289 million to reduce impacts of wildlife on people.

More than three-quarters of the budget – Bt360.608 million – will be spent on protecting residents and farmers from wild elephants. The Nation reports the money will be used to restore the elephants’ natural food sources. Also to build fences to protect locals from the wild elephants. The budget was requested by the Ministry of Natural Resources and Environment.Another Bt24.461 million of the budget will be used to tackle problems caused by monkeys. Including birth control, a data base of monkeys and cages to limit the areas they can roam. The move comes after monkeys in Lopburi ran amok during the Covid-19 lockdown. They were starved of their main food source – tourism.

The remaining budget of Bt40.222 will be invested to improve the capacity of government agencies to receive and take care of animals. Including those seized in criminal cases. New animal clinics will be constructed, while standardized tools will be prepared for officials, the spokeswoman explained.