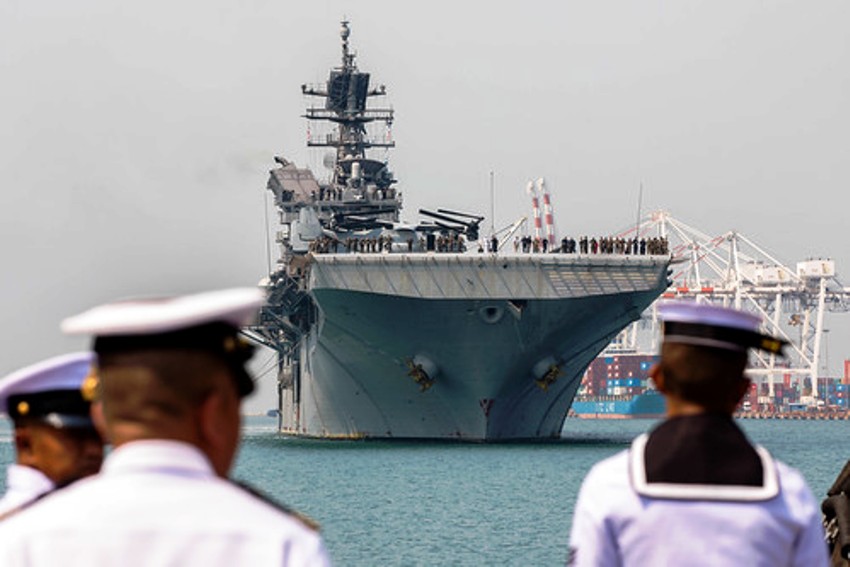 Ships from the US Expeditionary Strike Group (ESG) have arrived with US marines in preparation for exercise Cobra Gold 2020, Feb. 22. Cobra Gold is a multi-country war game conducted in Thailand annually.

The United States co-sponsored Combined Joint Task Force. Also the joint theater security cooperation exercise will be conducted in the Kingdom of Thailand. Cobra Gold 20 will be held Feb. 25 to March 6.

“Working with our Thai partners during exercise Cobra Gold is a superb opportunity for us to hone our amphibious and expeditionary combat skills,” said Rear Adm. Fred Kacher, commander of Expeditionary Strike Group 7. “In this 39th iteration of this exercise, we are truly demonstrating what the U.S. Navy-Marine Corps team and the power of partnership offer this extraordinarily vital part of the world.”

While in Thailand, Sailors and Marines will interact with their Royal Thai Armed Forces counterparts. They will engage in planning and interoperability events including; ship tours; capability briefs; and exercises designed to give both teams a clear understanding of each other’s processes.

This year’s exercise will consist of three primary events; a command post exercise, humanitarian civic assistance projects; and also a field training exercise that includes a variety of training events to enhance interoperability; and above all strengthen regional relationships.

Furthermore Cobra Gold is designed to improve participating nations’ capability to plan and conduct combined and joint operations; build relationships among participating nations across the region; and improve interoperability over a range of activities, enhancing maritime security, and responding to large-scale natural disasters.

The Sailors and Marines will also have the opportunity to participate in service events including a sports day; community relations events; and morale welfare and recreation tours. They will allow them to experience culture and build camaraderie with their counterparts in the Thai armed forces.

Operating in the U.S. 7th Fleet area of operations, the America ESG, 31st MEU team is comprised of America, Green Bay, USS Germantown (LSD 42). Also Marine air-ground task force with a combined total of 4,500 Sailors and Marines. Above all who can also conduct missions across the full spectrum of military operations.