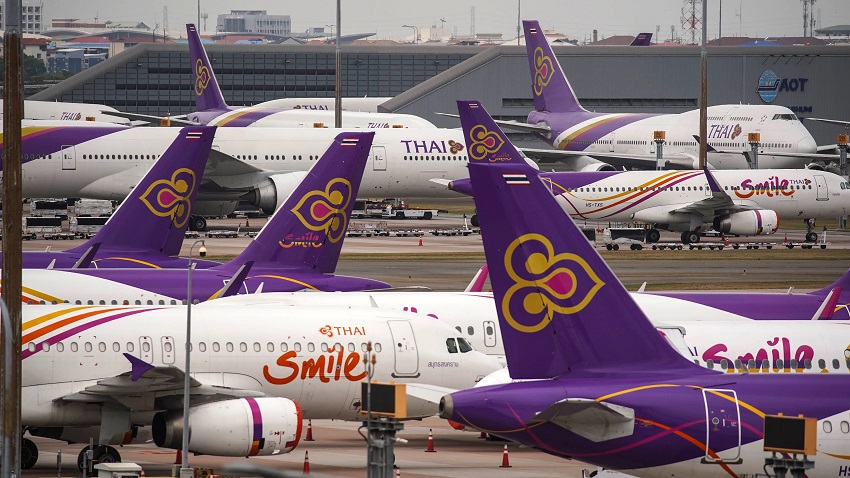 A resumption in July is being considered, and THAI stressed it will continue to monitor the situation with a view to recommencing commercial flights as soon as it is safe to do so.

The airline said it will take into account events both abroad in terms of lockdowns and potential demand for international air travel should infections continue to fall in other countries.

A schedule will be announced at a later date.

The only international flights THAI is currently running are to bring stranded Thais home and support Thai farmers by delivering their agricultural produce.

Meanwhile, Thailand’s national state enterprise policy supervisor has proposed that debt-ridden Thai Airways International Plc (THAI) should file for bankruptcy. Which will pave the way for a decisive debt restructuring. The bankruptcy debt reduction plan for will go before the cabinet on Tuesday.

Under the process, if it is approved, the Thai Airways will get an automatic stay from debt collection by creditors. The creditors will then be forced to participate in the debt-rehabilitation plan.

The Central Bankruptcy Court will organize the negotiations between the creditors and debtor. It will also appoint a professional plan administrator with the consent of the two sides.

Speaking after chairing Monday’s State Enterprise Policy Committee (SEPC) meeting, Prime Minister Prayut Chan-o-cha said that it was agreed that rehabilitation under the bankruptcy law for the national carrier will be tabled for cabinet consideration.

Rehabilitation is different from bankruptcy

Government spokeswoman Narumon Pinyosinwat told reporters that the SEPC, which oversees policies for state-run enterprises, agreed that the airline should seek rehabilitation under the supervision of the Central Bankruptcy Court.

Details of the plan will be known after the cabinet meeting today, she said. Adding that both the Transport Ministry and the Finance Ministry have agreed to the plan.

“The prime minister has stressed the need to make the public understand that this is not about entering bankruptcy. Its but undergoing a process of rehabilitation,” Ms Narumon said.

The government spokeswoman added that the SEPC has also retracted its earlier resolution. That the Finance Ministry should serve as a loan guarantor for Thai Airways. Instead it has decided in favour of a rehabilitation plan.

According to the Bangkok Post, THAI’s assets were recorded at 256 billion baht at the end of last year. While its total debts stood at 245 billion baht. Still, its debts are expected to outpace those assets this year.

Meanwhile, the airline’s debt-to-equity ratio has skyrocketed to 21:1.