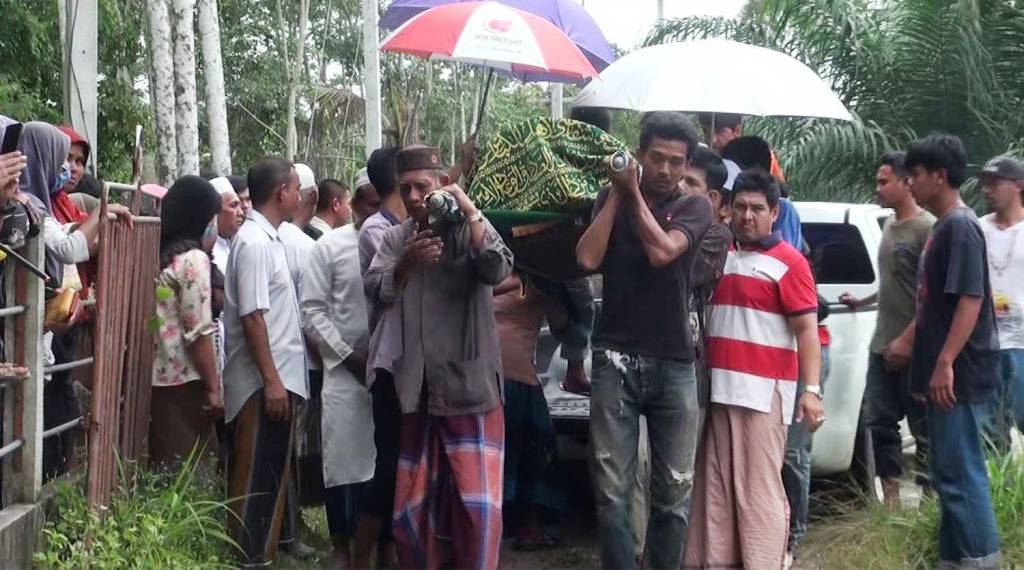 The police in southern Thailand have launched a police investigation the cold blooded killing of a drug suspect by policeman in Nakhon Si Thammarat on Sunday. Charoensak Ratphumad, 31, was shot and killed in a rubber plantation at Moo 3 village in tambon Hin Tok.

He was wanted under a court arrest warrant. His relatives and witnesses said Charoensak was raising his arms and surrendering to a group of armed police. He had only a small knife, not a gun, but one of them shot him anyways.

The policeman who killed him claimed Charoensak was charging at him with the knife, and he fired the shot in self-defense. However villages who witnessed the shooting deny his claims.

Arnon Seng-iad, 42, Charoensak’s brother-in-law, said relatives would file for legal action against the officer who shot him. They said although Charoensak had been involved in drug dealing, police had overreacted.

He was not in any position to give any resistance and was shot in cold blood, he said.

A large crowd of angry villagers surrounded the police unit after the shooting. The relatives have petitioned for justice.

The committee will examine all the evidence and question witnesses from both sides. Above all it will ensure justice for all concerned, Pol Maj Gen Thamnoon said.

American Shoots and Kills himself in Pattaya

Meanwhile, a 25-year-old American Michael Giavasis shot and killed himself with a stolen gun in a condo in Pattaya. According to witnesses, the man stole a 9mm hand gun from an outdoor shooting range and fled on a motorcycle.

On the way, he allegedly fired some shots, but hurt nobody.

About 12.30am on Tuesday the man allegedly had an argument with Pichakorn Thapana, 18, a local resident, and hit him on the head. Mr Pichakorn told police this happened after he parked his motorcycle in front of the condominium and was waiting for his sister. The sister saw what happened and threw her hat at the American.

The American man allegedly produced a knife in a threatening manner and walked away. He then returned with a gun and fired one shot into the sky. He then shouted angrily near a security guard kiosk, causing a further disturbance. Mr Pichakorn and his sister then called the Pattaya police.

On reaching the scene, police surrounded the area and told the man to lay down his weapon. According to police, the man fired a few shots in reply.

One of the shots hit a TV Channel 3 reporter in the heel and he was given first-aid at the scene. He was later taken to Bangkok Pattaya Hospital.

At approximately 3am, a police team went up to the American man’s room with a close friend. They tried to talk to the American through the door and also tried called him on the phone, but he did not answer.

The police finally the decided to break into the room and found the man lying dead on a bed with a gunshot wound to the head. He was believed to have been dead about two hours. Police believed he had killed himself.

A United States passport found in the room identified the man as Michael Giavasis, 25. Police also found a knife and a Glock pistol with one bullet left in the magazine. Forensic police were examining the room as part of a police investigation. His body was taken to the Forensic Medicine Institute for an autopsy.

The US embassy was asked to inform the man’s relatives who had just arrived in Thailand and are in 14 day quarantine.