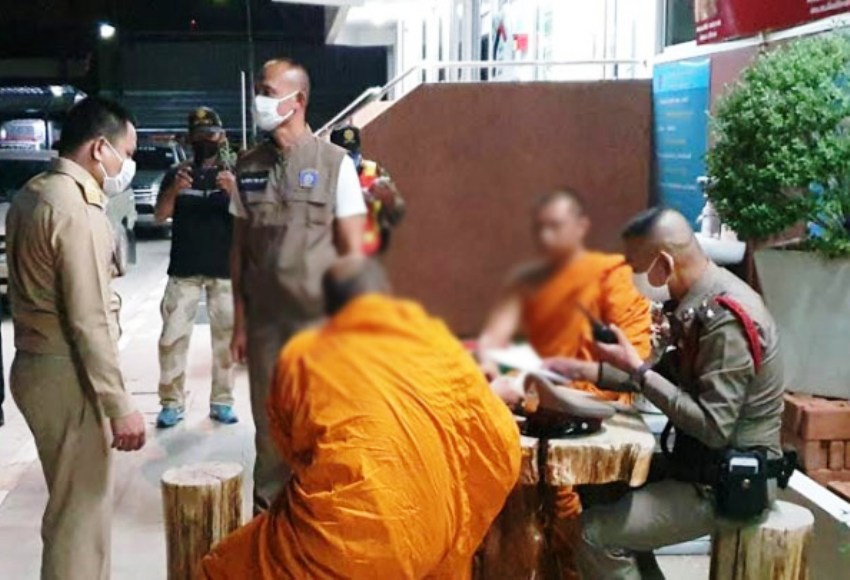 Police northeastern Thailand arrested 2 drunk monks driving in the middle of the night during the national curfew due to Covid-19. Pol. Capt. Mahaniyom Niyom from the Sisaket Police Station arrested the 2 monks breaking the curfew in the main city of Sisaket.

The monks were allegedly driving in a local village and both appeared to be drunk when police found them. When question by police the monks were so intoxicated they didn’t make sense. Police also found a box of homemade whisky in the back of the truck was a box of whiskey.

Both drunken monks were given a breathalyzer test and and blew well above the legal limit.

The two drunken monks were taken to the Sisaket Police Station. There they admitted to Pol.Col.Theppitak Sanggla that they had broken the curfew. One of the monks also admitted to driving drunk.

According to Pol.Col.Theppitak that in order charge them, the monks first needed to be defrocked (disrobed). According to Thai Law monks cannot be arrested unless and until defrocked, nor can temples be searched.

Consequently both monks were taken to the senior abbot in Sisaket and defrocked. Upon disrobement both men were charged with breaking the curfew.

Furthermore the former monk that was driving the pickup was charged with impaired driving.

Two weeks ago, a Thai monk was defrocked and then arrested for shooting a man living in the same temple at Wat Mongkhol Nimit in Bang Sao Thong district of Samut Prakan. The former monk claims he only shot in self-defense.

Pol Col Voravut Pankhao, chief of the Bang Sao Thong police station said they seized an unregistered hand gun with two bullets from the monk. He had hidden the hand gun in a black plastic bag containing empty plastic bottles.