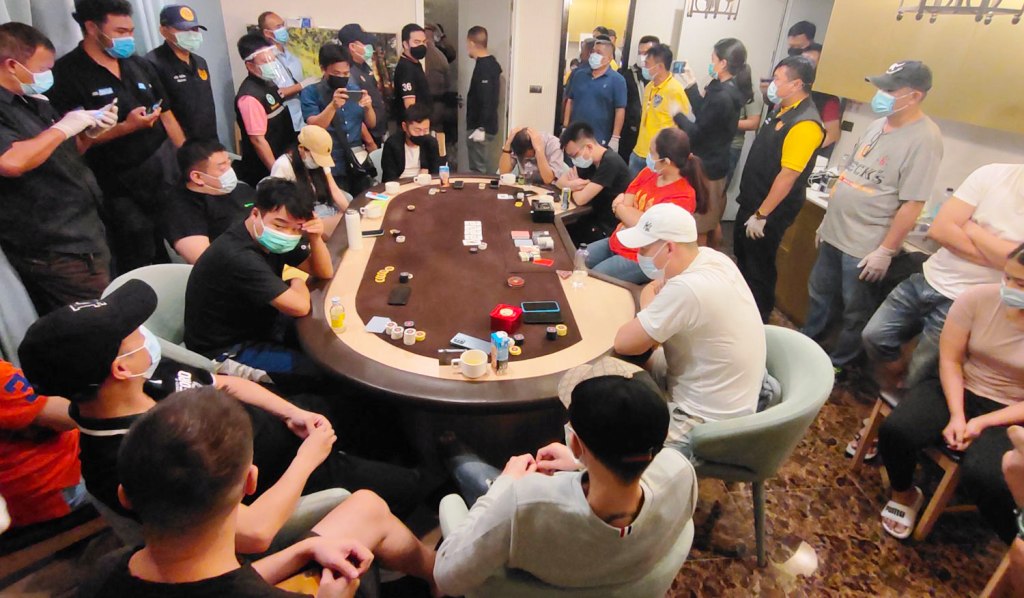 Police in the resort town of Pattaya have raided a condominium and arrested 16 foreigners and 5 Thai for illegal gambling. The raid took place at the  Espana Condominium & Resort in the early hours of Saturday.

A combined team of Pattaya police, tourist police and health officials jointly raided Espana Condominium & Resort around 1am on Saturday.

The team acted on a tip-off that an illegal gambling casino was being held there, Pol Maj Gen Thiti Saengsawang, acting chief of Chon Buri police told a press briefing.

The team found 21 people gambling inside rooms 517 and 518 on the fifth floor of the condominium complex. The 21 people apprehended were 14 Chinese Nationals, five Thais, a Singaporean and a Cambodian. Gambling tables, chips and decks of cards were seized by authorities.

An officer involved in the raid told the Bangkok Post that the operation was part of a policy to contain re-emerging Covid-19. All the gamblers were held in Pattaya police custody for legal action. An investigation was being extended to find those involved in running the illegal casino.

An initial investigation found five of the Chinese nationals had overstayed their visas. The Cambodian gambler had entered Thailand illegally. They were also ordered to take covid-19 tests for coronavirus infections.

Police were extending the investigation to find those involved in the operation of the illegal casino.

Meanwhile,  Thailand’s national police chief transferred the commissioner of the Provincial Police Region 2 to an inactive position due to the existence of illegal gambling dens in his region.

The transfer responded to reports on gambling dens in Rayong, Chon Buri, Chanthaburi and Trat provinces. Four police commanders of the provinces were earlier transferred out of their posts.

The national police chief also formed a committee to find facts after the Office of the Inspector General of the Royal Thai Police Office found evidence that illegal gambling dens in Rayong and Chon Buri provinces spread COVID-19.

The fact-finding committee will check if any local police officers were lenient or took bribes from gambling den operators.

Officials on Friday warned of “stricter punishments” for those involved in gambling, and an order issued a day earlier made it possible for authorities to penalize people who conceal their travel histories in Thailand.