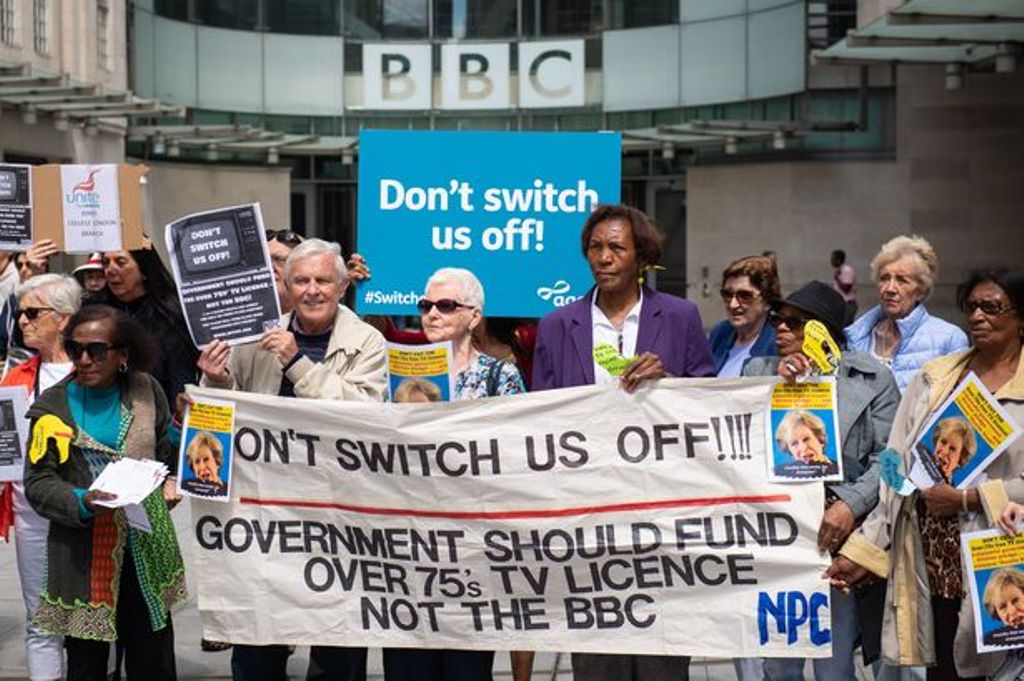 Prime Minister Boris Johnson’s Conservative government announced Wednesday it is considering a change in the way the BBC is funded. A change that would severely dent the coffers of the nation’s publicly funded broadcaster.

The Conservative government also said it would hold a “public consultation” on whether to stop charging people with a criminal offenses if they don’t pay the annual levy that funds the BBC.

The broadcaster gets most of its money from a license fee paid by every television-owning household in the country. The license fee currently stands at 154.50 pounds ($201) a year. Failing to pay can result in a fine or, in rare cases, a prison sentence.

In 2018, more than 121,000 people were convicted and fined for license fee evasion. Five people were imprisoned for not paying their fines.

The BBC is Britain’s largest media organization, producing news, sports and entertainment across multiple TV, radio and digital outlets. The BBC’s size and public funding annoy private-sector rivals, who argue the broadcaster has an unfair advantage. Its critics say the BBC’s funding model is no longer appropriate in a digital media world.

The BBC’s coverage has a very liberal bias and tends to report negatively on conservative views. Blaming the government decision to rethink the broadcaster’s funding as politically motivated. But the government has denied these claims stating “the broadcasting landscape has changed dramatically.” With the rise of Netflix and other streaming services triggering a decline in traditional television viewing.

Although it said it would consult the public, the government made clear it that favored the proposed change.

“As we move into an increasingly digital age, with more and more channels to watch and platforms to choose from, the time has come to think carefully about how we make sure the TV license fee remains relevant in this changing media landscape,” Culture Secretary Nicky Morgan said. “Many people consider it wrong that you can be imprisoned for not paying for your TV license. Even more that its enforcement punishes the vulnerable.”

The license fee generated around 3.7 billion pounds ($4.8 billion) for the BBC last year. It’s estimated that removing criminal sanctions for non-payment would cost the broadcaster about 200 million pounds a year.

The BBC is already under financial pressure, and last week announced it was cutting 450 newsroom jobs. The BBC News workforce has about 6,000, the job cuts would save 80 million pounds.

Even though the Conservative government acknowledges the decriminalization move would hit the BBC’s funding, it’s not proposing any way to make up the gap. Morgan also said once the BBC’s current funding period runs out in 2027. Even more the broadcaster’s entire license fee might be in question. “We must all be open minded about the future of the license fee beyond this point,” she said.

The BBC said a government-commissioned review of its funding a few years ago had “found the current system to be the fairest and most effective.”

The relationship between Britain’s government and the media has become increasingly frosty. Above all since Johnson became prime minister in July. His office has restricted access for journalists to government ministers and advisers.

The government has also been barred ministers from appearing on the BBC’s flagship morning radio program, “Today.” Because of its alleged anti-Conservative bias.

Last week some media outlets, including The Associated Press, declined to broadcast a pre-recorded address to the nation by Johnson. Marking Britain’s departure from the European Union because the government refused to allow independent media outlets to film or photograph the statement.

On Monday, the government invited selected journalists to a briefing about trade negotiations with the EU. Breaking with the tradition that briefings are open to all reporters covering Parliament. The invited journalists walked out after officials refused to admit their colleagues and the briefing was canceled.

The government’s combative stance has been criticized even by media outlets that have been supportive of Johnson. The Conservative-backing Daily Mail newspaper accused the government of a “crude attempt at censorship.”

In an editorial, the newspaper said the role of a free press was to “explain the complexities of our rapidly changing world. Also to hold the mighty to account. Any government preventing them doing so abuses its power.”

U.S. President Trump Officially Acquitted of Impeachment by US Senate