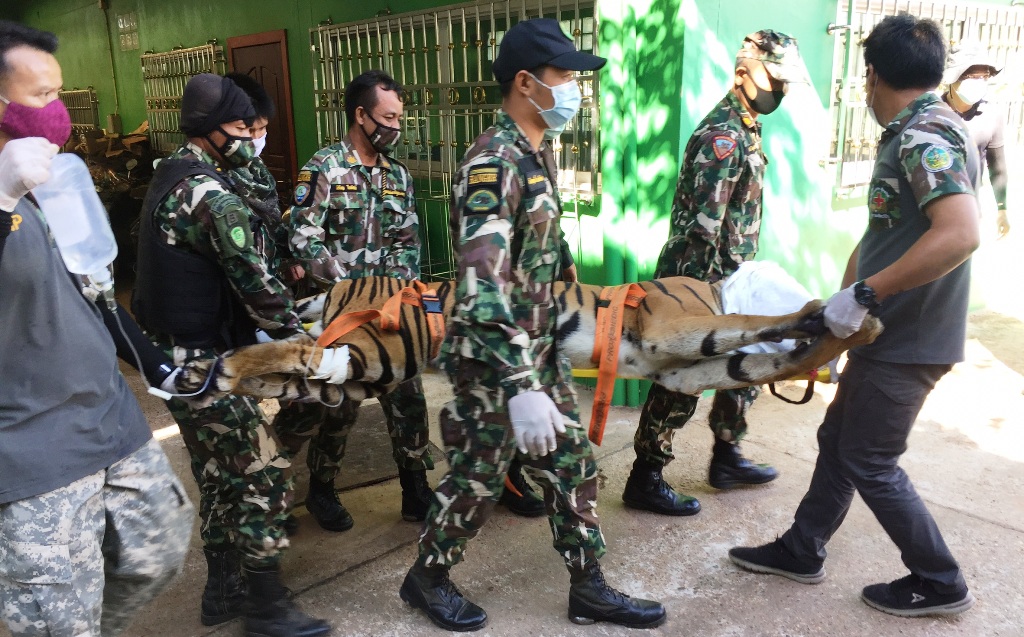 They were later placed in the custody of the Department of National Parks, Wildlife and Plant Conservation Captive Breeding Centre in Si Sa Ket.

Officials ran DNA tests on the animals and confirmed three of them were not related to any local tigers in the park and therefore thought to have been smuggled. Prakit Wongsriwattanakul, deputy director-general of DNP said the results of DNA tests on a further 20 tigers, including two cubs, will be released before the end of December.

The tiger cubs’ seizure is a follow-up from an early crackdown at the tiger park in January 2018. Wildlife officials confiscated various locally protected species, including red pandas, grey-shanked doucs (monkeys) and elongated tortoises. The owner of the tiger park faces up to five years in prison if convicted of smuggling in wildlife species.

In the wild, tigers play the role of apex predator. The biggest of the wild cats can roam almost 300 kilometres to find food and mates, and they very rarely come into contact with other tigers or people.

Unfortunately, the number of wild tigers in Thailand is dwarfed by the numbers that now live in captivity.

There are roughly 200 tigers in the wild and the kingdom is committed to increasing that number to 300 in the coming years.

Sadly, many wild animals face extinction due to a breakdown in the ecosystem of their habitat.

Humans are sharing resources with millions of species. The biodiversity in the forest enriches nature endlessly. However, wild animals are facing the threat of poaching and the constant decline in their population every year has driven some species to extinction or near extinction.

The tiger, one of the protected and endangered species, is an indicator of the natural abundance of the forests which provide habitats for the wildlife. The wild cat is an apex predator at the top of the food chain.

An increase in the number of the tiger population demands an adequate supply of its prey and plants to satisfy the tigers’ needs for food. Such relationship serves to illustrate the abundance of the forests.

According to WWF Thailand, there were approximately 100,000 wild tigers in the world at the beginning of the 20th century, but that population had declined to about 3,200 in 2010.