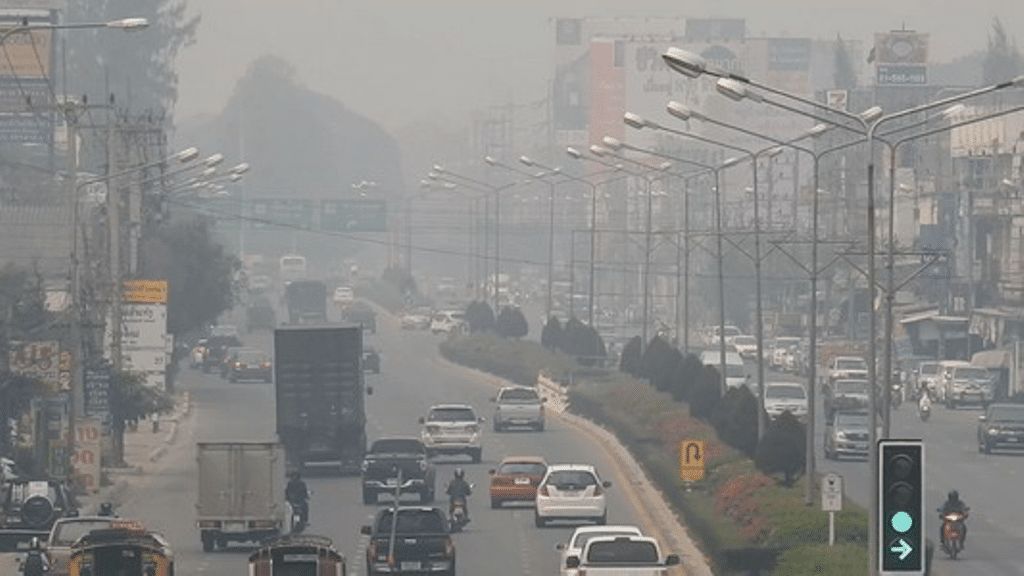 The concentration of airborne ultra-fine PM2.5 dust particles in several northern provinces soared beyond safe limits on Wednesday. The concentration comes as hundreds of active fire hotspots have been detected in the region.

Chiang Mai, in particular, experienced a massive drop in air quality since yesterday. With levels of both the ultra-fine PM2.5 dust particles and the larger, PM10 dust particles hitting unhealthy levels. The PM2.5 dust particles levels are especially dangerous for younger children; the elderly; pregnant women; and individuals with underlying respiratory and/or cardiovascular diseases.

Due to the worsening haze, residents have been advised to avoid all outdoor activities, a local authorities said.

According to readings from air quality monitoring station in tambon Chang Khoeng in Mae Chaem district, PM2.5 dust particle levels in the area reached as high as 91 microgrammes per cubic metre (µg/m³). While the concentration of PM10 pollutants peaked at 131µg/m³.

Based on the data reported by air monitoring stations in 17 provinces in northern Thailand. PM2.5 dust particle levels in the region hovered between 32-90µg/m³. While PM10 concentrations ranged between 48-107µg/m³.

Wildfire hotspots in the north

Meanwhile, Chiang Mai’s command centre for wildfires and PM2.5 dust particle prevention said that as of 2am yesterday, at least 666 wildfire hotspots have been detected across the North — 116 of which were found around Chiang Mai.

Mae Hong Son, however, had the most hotspots, with 186 detected in total, the centre said, adding most of the fires were in protected and reserve forests.

Of the 666 hotspots, 387 were in protected forest areas, 240 in reserve forests. While 19 were found in agricultural land reform zones, according to the centre.

Maj Gen Thanatphon Kosaisewi, deputy 3rd Army chief in his capacity as the deputy chief of the 3rd Army’s wildfire and haze control command, said since their firefighting operation began on Sunday, 84,000 litres of water, transported in 42 helicopter trips, have been dumped on fires in the area.

Separately, Suchat Saelinwong, a firefighter with Khun Tan National Park who was hit by a moving train while combatting a blaze in Mae Tan Noi village in Lampang’s Hang Chat district on Monday succumbed to his injuries yesterday.

Haze from agricultural burning and brush fires is unfortunately almost a tradition, in late February to April. The cities in northern Thailand and sometimes Isan are hit by haze with smoke and dangerous PM2.5 dust particles.

This pollution is not industrial or due to cars but it comes from agriculture and bush fires set by arsonists and local farmers.

Despite a formal ban, Thai farmers at this time of the year often burn their fields and multiplied by the number of their lands, these haze creates a significant pollution dangerous for public health.

Fragile people and the ones having breathing difficulties are particularly exposed. It is a plague that lasts for years and the authorities have never been able to stop it.

The Air Quality Index (AQI) considers that the air is good between 0 and 50 AQI and beyond unusually sensitive individuals may experience respiratory symptoms and that the is unhealthy if AQI is more than 100.