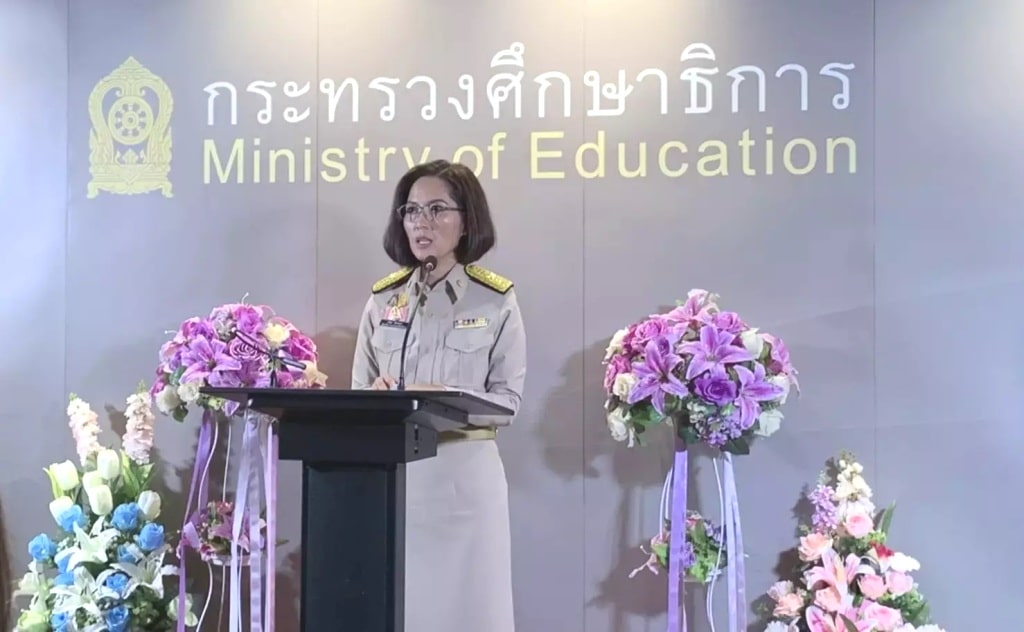 The first Thai female education minister has announced three main policies as she takes over a ministry dominated by men. The newly appointed Education Minister Trinuch Thienthong entered her ministry for the first time today and announced the three important policies that she would immediately implement.

Minister Trinuch, also an MP from the coalition-core Palang Pracharath Party, said she would promote safety at schools, provide people’s access to digital resources and knowledge and campaign for vocational education.

For safety at schools, minister Trinuch said schools must be free of bullies and child abuse. Those who abuse students physically and mentally would face decisive action, she said.

On digital knowledge and access, Minister Trinuch said the Ministry of Education would share the knowledge and skills that were necessary for people of the 21st century and push for the development of adequate internet networks and relevant equipment to ensure public access to digital resources.

For the promotion of vocational education, the minister said that Thailand suffered the shortage of vocational workers and parents could plan a good future for their children by sending them to vocational schools.

The minister said she would actively promote leading vocational schools as the choices for students and parents.

Violence in schools is becoming an increasingly serious problem, especially violence involving weapons. School violence includes violence between the students; physical attacks by students on the school staff; and physical punishment or violent attacks by teachers and school staff on the children.

Violent acts by a teacher rarely get reported as most consider it as a form of punishment. Even when the child tells his/her parents about it, the reply is: “What did you do wrong?” So children usually just keep quiet and the whole continues to be ignored by everyone.

When Childline Thailand receives a call regarding a child being subjected to violence by a teacher, we immediately officially notify the school’s Principal and report the act of violence to the Ministry of Education. If it is the teacher’s first transgression, and the physical affect of violent act is minimal, all that can be done is the issuance of an official warning to the teacher. Therefore, in some cases, parents prefer just to change their child’s school so as to prevent any further repercussions.

Bullying seems to be the most widespread form of peer-to-peer violence. Bullying covers any form of physical, verbal or emotional attack such as hitting, pushing, pulling hair, teasing, calling names, extortion, etc. Usually, if violence takes place within the school compound, it remains there. Witnesses, victims and perpetrators either accept it as a normal way of life or are silenced by fear and shame.

Many factors have to be taken into account in the case of bullying. Most bullied children are absolutely terrified of the bullies. Bullies usually come in a group, and if so, intervention has to address all members of the group. The bullied child is usually ashamed to acknowledge the fact to their parents for fear of shame of being “not up to defending themselves”.

Bullying usually requires the cooperation of parents, teachers, school staff and other students. Victims of prolonged bullying usually suffer from low self-esteem, social anxiety and other consequences; therefore, it is advisable for child in these circumstances to undergo a psychological evaluation to ensure that no long term damage has been done.