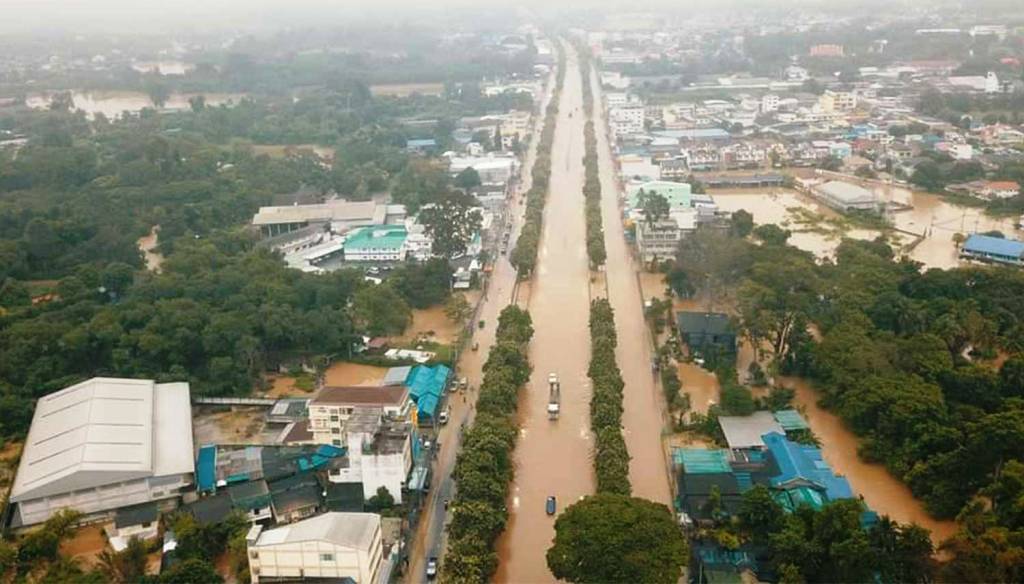 Even worse still, runoff entered the Lam Takhong canal, causing it to burst its banks. The overflow sent a huge torrent through downtown Pak Chong. Water levels were recorded from 50cm to one meter.

Khao Yai National Park has been closed for the weekend because of the risk of more flooding and mudslides.

More than 200 households in tambons Nong Nam Daeng, Khanong Phra and Mu Si were affected by the inundation. It was the worst flooding in the district in 15 years, the Bangkok Post reported.

Nakhon Ratchasima governor Wichian Chantaranothai met with officials of various agencies at the Pak Chong district office on Saturday. Above all to map out measures to cope with the situation.

At least 80 households in four villages were inundated in tambon Khanong Phra. With the average flood level over 50cm and the water still rising rising.

Governor Wichian Chantaranothai ordered flood relief packages, including drinking water, to be distributed. Local officials were also instructed to prepare a shelter in case it became necessary to evacuate people from their homes.

Nakhon Ratchasima or Korat Thailand is the most prosperous province of the East. Its richness of Culture is very interesting since it has its own folk song called ‘Pleng Korat.’ Nakhon Ratchasima is also important to Thai History. All ranges of tourist attractions are available here that you need to take quite some time to visit all of them.

Nakhon Ratchasima, otherwise known as Khorat, is the largest northeastern province, and the inhabitants of the province are mainly engaged in agricultural activities, growing such diverse crops as rice, sugar cane, sesame, and fruit. There are more than 100 savings and agricultural cooperatives in the province, 35 irrigation projects, and 7,122 industrial factories. Most of the factories are rice mills, tapioca product manufacturers, and industrial factories.

Historically, Khorat Province was an important area for thousands of years, first as the site of several ancient prehistoric communities and later as important outposts of the Dvaravati and Khmer Empires. Ruins of both Dvaravati and Khmer Temples are located across Khorat, particularly at Amphoe Sung Noen and Amphoe Phimai, the latter one of the most important provincial capitals of the Angkorian Empire.