What Does Modern Nursing Home Look Like in Today's World 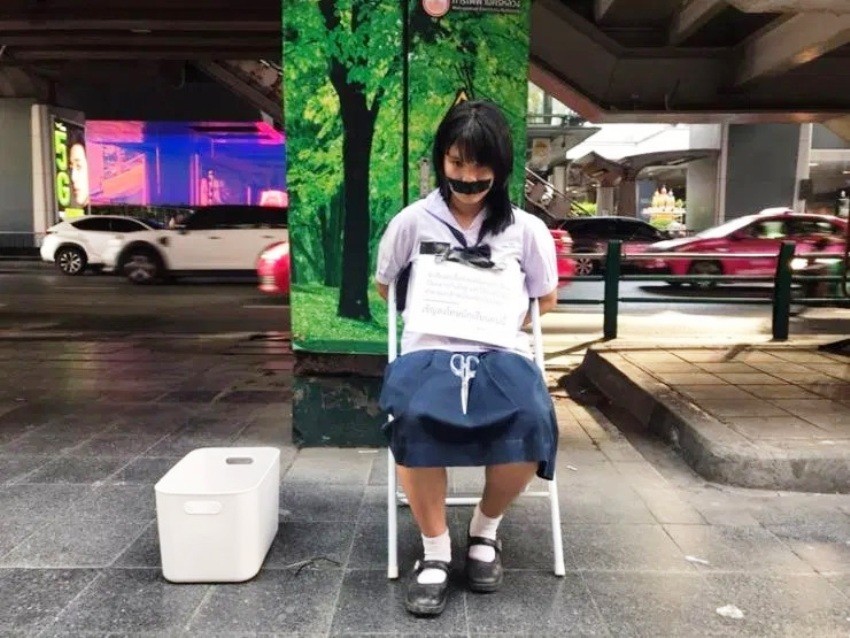 It all started with a compulsory haircut and a 15-year-old high school student Benjamaporn Nivas, was have none of it and she has made no secret of it either.

In recent days the outspoken teen Student who goes to school in Bangkok, has become the popular face of a burgeoning campaign by Thai students. To have compulsory haircuts abolished in all schools.

Because they see haircuts as insidious forms of control over their lives.

Teachers at schools around Thailand require boys to sport crew haircuts while girls need to have shoulder-length haircuts. Yet more and more students feel that these old haircut rules stifle their individualism. Even more robbing them of their freedom to be themselves.

In her recent one-person protest, Benjamaporn, dressed in her school uniform, sat on a chair on a busy street in central Bangkok. With her hands tied behind her back and duct tape covering her mouth. The schoolgirl had a pair of scissors in her lap and a handwritten sign hanging from her neck.

“This student is violating a school rule by wearing her hair long with bangs. You may punish her,” the sign said, ostensibly in invitation to passersby to cut the girl’s hair.

The stunt has gone viral on social media, with numerous young Thais expressing support for the cause of abolishing obligatory haircuts and school uniforms. Others, however, have accused the schoolgirl of seeking to undermine traditional norms and mores in society.

Some people have gone further still, calling the girl names and insinuating that she led an immoral lifestyle. Benjamaporn has even been accused of staging her protest with lascivious intent. Despite the fact that she is only 15.

The student has shrugged off the insults. “I do read and see all the comments, and I don’t feel anything for these people. Also I don’t need to value their comments,” she explained in an interview. “I listen and take all the feedback, both negative and positive ones. But some aren’t constructive, and I just don’t have to pay attention to them.”

Her cause is resonating with many of her peers, many of whom similarly dislike being forced to conform to strict dress and hairstyle codes in school.

“We students are forced to cut our hair against our will, violating our rights, and this has to stop,” Benjamaporn explains. “[My] hair is part of my body and no one else should have the power to decide what I do with it, but me.”

Yet it isn’t just uniformly enforced dress codes and hairdos that are rubbing up many young Thais the wrong way. So is the tradition whereby students are required on certain occasions to prostrate themselves at the feet of their teachers in an overt sign of submission to their authority.

“I used to think this kind of practice was a normal part of Thai culture and I didn’t think much of it,” Tanawat, a university student who is advocating for school reform online, told UCA News. “But then it started to dawn on me that from early childhood we are taught to be submissive. You cannot become a free and independent person if you are required to crawl on the ground in front of ‘senior’ people.”

“In the past, lords and ladies would demand prostration from their peasants, serfs or [inferiors],” says Voranai Vanijaka. Voranai is a social commentator and newspaper columnist. “At present, the ‘social superior’ would expect it from the ‘social inferior.’ Teachers would demand it from students.”

Yet the practice, which is widely touted by its supporters as a sign of respect, is pernicious in its effects on society, Voranai argues.

“It is ingrained into our psyche since we were young,” he says. “The repetition of doing it constantly makes it normal. Prostration becomes a part of our identity. It’s coded in our cultural DNA. From years of repetition, eventually in mind and in spirit. We submit, giving the person whom we prostrate before absolute power over us.” More and more young Thais, inspired by ideas of individualism and personal choice. They do not want to take the old practice of prostration lying down.

“It’s humiliating and it’s a kind of brainwashing. I want to see it stopped,” Tanawat says.

“In many classes in school we barely learn anything. We only learn to respect our teachers, not to ask questions and the like. Instead of expecting us to grovel at their feet, our teachers should put more effort into teaching us useful knowledge.”

Some students have even openly defied traditions by refusing to prostrate themselves during school ceremonies. In 2016 Netiwit Chotiphatphaisal, at Bangkok’s Chulalongkorn University, made headlines nationwide. He refused to join his peers in prostrating themselves during an initiation ceremony.

Ever since, Netiwit, a personable 24-year-old who has been at the forefront of a student movement demanding the reform of Thailand’s ossified educational system. Including the abolition of mandatory dress codes and haircuts. “In Thailand, the [ruling regime] wants everyone to think in the same way, to think inside the box,” he said. “The further down the hierarchy you are. Also the worse you are treated. [Most common] people don’t ask questions because they believe that they are lower[-status] people with no dignity who have to obey.”

“It is to the benefit of the military government and conservative members of the ruling class that young Thais learn a rigid system from an early age,” an unnamed senior official at the Ministry of Education told UCA News.

“While we can debate the merits of rigid traditionalism and hierarchy, the end result is that we produce citizens who do not question. Citizens who do not inquire and who accept the system. These do not make good scientists, inventors or entrepreneurs.”

Thailand Goes on Offensive Over Monkeys and the Coconut Industry