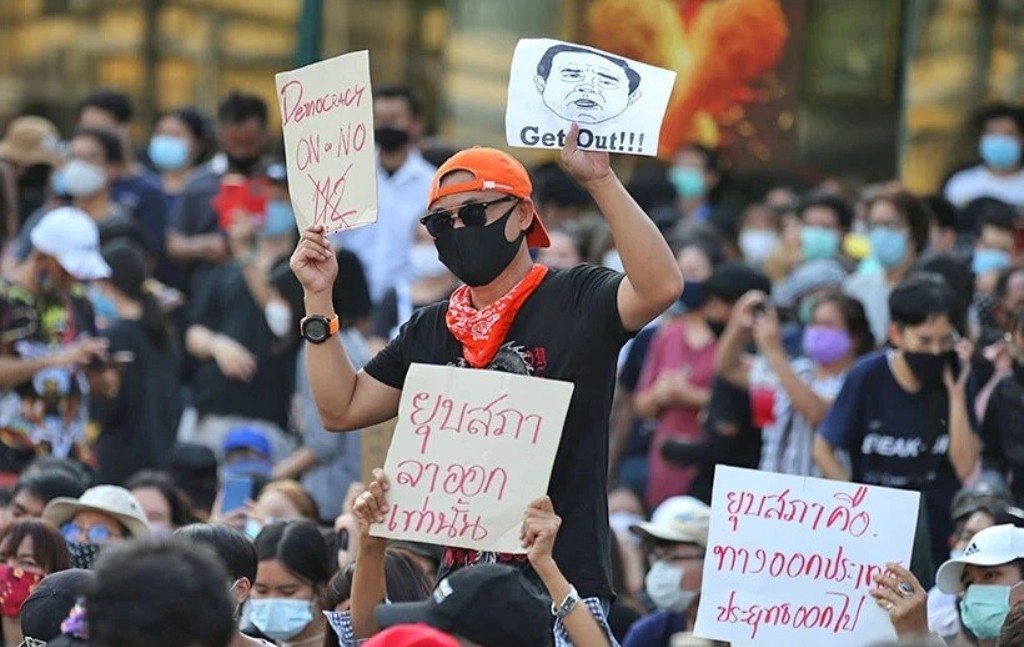 Thailand’s Prime Minister’s approach to anti-government ers in Thailand has rattled investor confidence in the economy. The Bank of Thailand’s Governor Sethaput Suthiwart-Narueput voiced his concerns last week about the protests hurting confidence, consumption and investment. The central bank has already flagged that it may take at least two years for the economy to return to pre-pandemic levels.

Prime Minister Prayut Chan-o-cha’s government has unveiled a raft of measures to drive consumer spending after trade and tourism ground to a halt during the pandemic. The uncertain outlook for the economy, which contracted a record 12.2% in the third quarter, has weighed on the nation’s stocks and currency.

Unlike previous episodes of political turbulence, when the economy escaped major hits thanks to robust external demand, weak global growth now means support is limited to government measures, which protests threaten to derail, according to Somprawin Manprasert, chief economist at Bank of Ayudhya Plc.

“Although the bottom might be behind us, it doesn’t mean that we’re on a path to recovery if the economy lacks support measures” from the government, Mr Somprawin said. “The uncertainty and government instability could result in the discontinuity of measures, which will affect growth.”

“The risk premium that investors demand to hold Thai bonds will be influenced by the extent of the unrest’s escalation and any significant deterioration in the outlook for the baht,” said Bloomberg’s Asean economist Tamara Mast Henderson .

“Should either condition materialize, we expect the BoT (Bank of Thailand) to initiate large-scale systematic purchases of government bonds to ensure that market yields remain low enough to support the recovery.”

While the political unrest hasn’t derailed any government programs, investors dumped shares of shopping mall operators such as Central Pattana Plc and Asset World Corp on concerns of weak sales. Consumers may prefer to stay home as protesters threaten to continue until their demands are met for Gen Prayut’s ouster, a new constitution and reform of the monarchy.

That risks spoiling Finance Minister Arkhom Termpittayapaisith’s bets of tax breaks and cash handouts to low-income groups to spur recovery. While Thailand was successful in containing the pandemic with a national lock-down and border closures, the measures rendered millions jobless and left small- and medium-sized businesses struggling.

One key to reviving the economy will be how fast the nation can open up to tourists, who generated about $60 billion in revenue in 2019. Authorities have made a start with limited long-stay visa permits.

“The worsening economic conditions are contributing to public discontent and indeed the protests are likely to persist, making it even harder for the recovery from Covid-19 to take hold,” said Euben Paraceulles, an economist at Nomura Holdings Plc.

More than 62% of participants in a poll by Suan Dusit University published Sunday said discontent with Gen Prayut was the key reason for the recent demonstrations, with about 44% saying they think the government’s weak performance played a role in escalating the protest movement.

The stand-off may intensify if the government and the parliament fail to come up with a satisfactory response to the movement’s demands, said Narongdach Juntarapaisarn, investment strategist at Bangkok-based AIRA Securities Co.

“Fresh protests will put more pressure on the Thai economy, which is already very fragile from the impact of the Covid-19 outbreak,” Mr Narongdach said. – Bloomberg