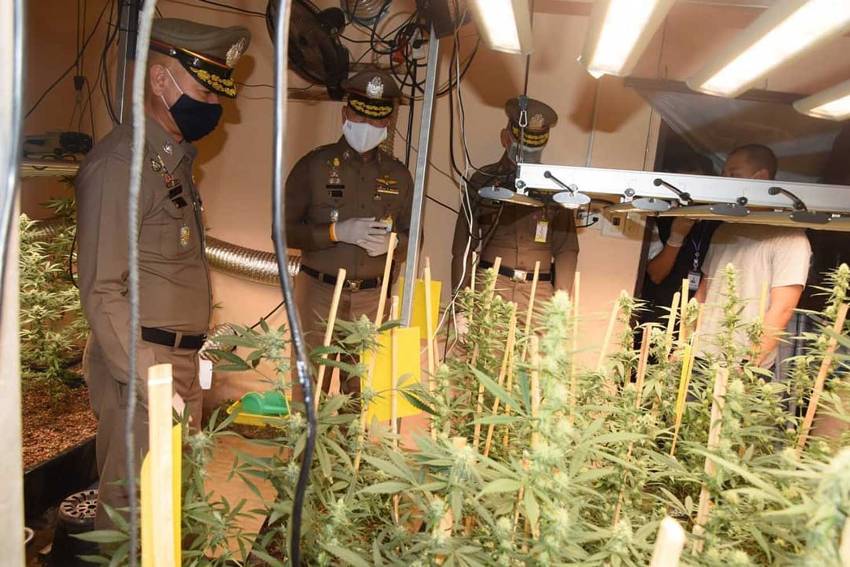 Police have busted a online marijuana syndicate and grow operations and arrested one Chinese National and eleven Thai Nationals. The 12 men were arrested in various raids throughout Bangkok, Pathum Thani and Ayutthaya.

The marijuana had been advertised on a Line Chat group called “Heaven Herb.’ Which had about 6,000 members, Polce said. It was set up by ID Line user @heavenherb.

In the first raid police arrested a man identified only as Bank, 27, and eight associates. They also seized 3 kilograms of dried marijuana and 1kg of magic mushrooms, at a car care shop in Bangkok.

In the second operation, Diew,  24, was apprehended with 1.5kg of dried marijuana in Pathum Thani province.

During interrogation, Diew allegedly said he had purchased marijuana from a Chinese national. This led to the arrest of Mr. Yinma and the seizure of 317 marijuana plants. The marijuana plants were found on the second and also the third floor of a commercial building.

Yinma told police he had grown the plants inside the building and dried them for sale.

He could produce 10kg of marijuana a month. His customers were Thais and foreigners, with deliveries to 30-40 customers a day. He had sold marijuana to 5,000-6,000 customers before being caught.

The Bangkok Post also reported him as saying he could earn about 700,000 baht a kilogram.

All suspects were charged with illegal possession of marijuana with intent to sell. Yinma was also charged with cultivating the plants.

Police gave details of the arrest of 12 suspects – one Chinese man and 11 Thais – for selling marijuana online, during a media briefing on Tuesday. (@thaimetropolice Facebook page)