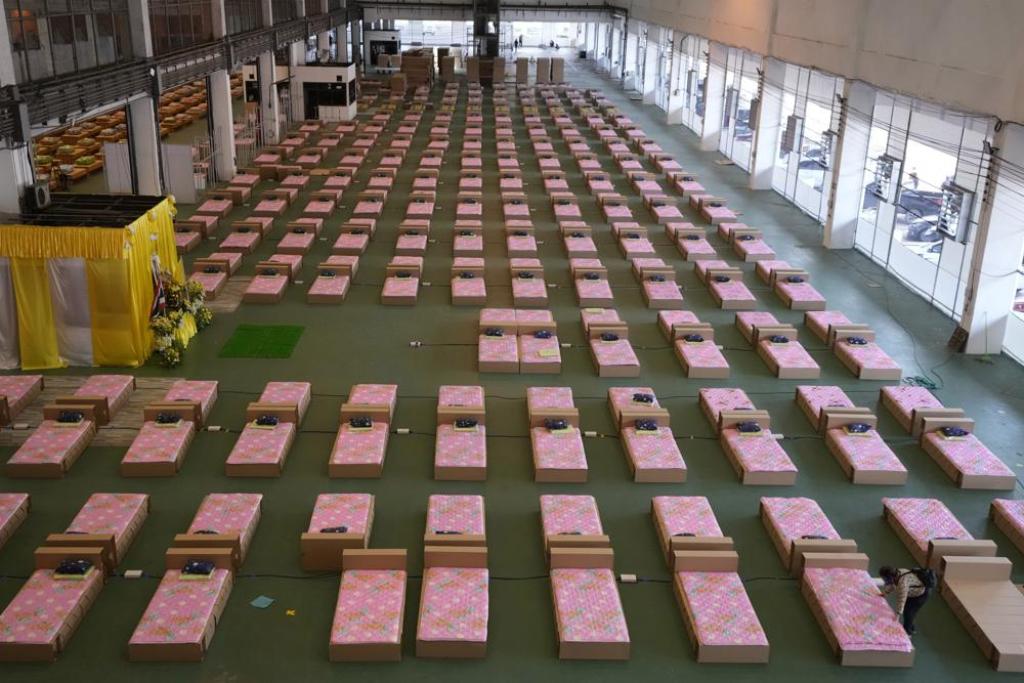 Health authorities in Bangkok raced to set up a large field hospital in a cargo building at Don Mueang International Airport on Thursday as the Kingdom recorded 18,912 coronavirus cases and 178 deaths on Saturday.

Other covid-19 field hospitals are already in use in Bangkok after it ran out of hospital facilities for thousands of infected residents.

Workers rushed to finish the 1,800-bed hospital at Don Mueang International Airport, where beds made from cardboard box materials were laid out with mattresses and pillows. It is to be ready for patients in two weeks.

The airport, a domestic and regional hub, has had little use because almost all domestic flights were canceled two weeks ago.

The quick spread of the delta variant also led neighboring Cambodia to seal its border with Thailand on Thursday and order a lockdown and movement restrictions in eight provinces.

Thailand reported 18,912 new cases and 178 deaths on Saturday, the highest number since the pandemic began in Thailand in early 2020.

Bangkok and its surrounding provinces have been in lockdown for more than two weeks, with overnight curfews and access only to supermarkets, pharmacies and essential services such as hospitals.

Authorities said about 6,100 patients in the Bangkok area are waiting for hospital beds. Of those, 103 are in critical condition, 1,410 have moderate symptoms and 4,662 have mild symptoms. Nearly a quarter of a million people around the country are in medical facilities, some with symptoms and some without.

Thailand has recorded a total of 561,030 cases and 4,562 deaths. More than 90% have been reported during the surge that began in early April.

At a market near the airport, a few people were out shopping and many said they were concerned about the virus’s spread.

“I watched the news and I got so stressed and depressed about so many people needing help. I don’t leave the house very often anymore, only once in a while when it becomes necessary to buy some supplies,” said Chaninart Aimoat, a 32-year-old office worker.

Prime Minister Prayuth Chan-ocha’s government is facing harsh criticism over its handling of the virus surge and slow vaccination program, amid reports of people dying in the streets or in their homes while waiting for treatment.

Thailand’s hospitals hope to provide 100 million doses of vaccines and inoculate 70% of its population within this year. So far it has administered 16.6 million doses nationwide. Around 18.5% of its 69 million people have received at least one dose while 5.5% are fully vaccinated.

On Wednesday, Swiss Humanitarian Aid dispatched 100 respirators and more than a million antigen tests to Bangkok to help fight the outbreak, while Britain is to send 415,000 doses of AstraZeneca vaccine within two weeks.

Meanwhile, 1.5 million doses of Pfizer vaccine donated by the U.S. government are to arrive Saturday morning.

“We will be sending no less than 1.5 million doses of COVID vaccine, in fact the goal is 2.5 (million). But the first shipment will be 1.5 (million),” said Thai-born U.S. Sen. Tammy Duckworth.