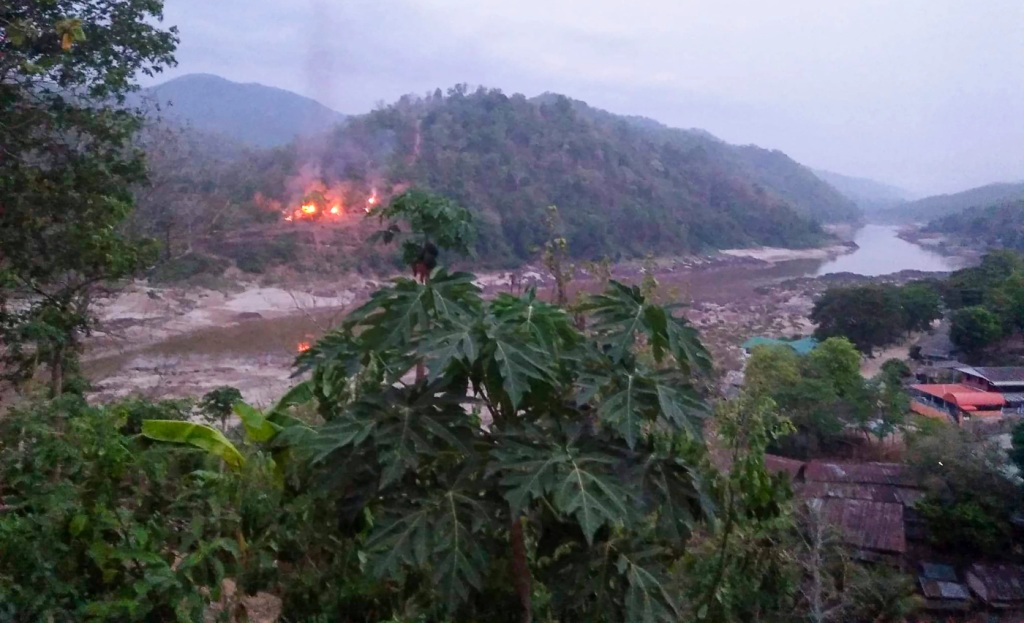 Myanmar’s military has launched fresh air strikes into rebel-held territory across the Thai-Myanmar border in Northern Thailand. Gunfire was heard from Mae Hong Son province as fighting escalates along the border.

Myanmar has been in turmoil since the Military Junta ousted civilian leader Aung San Suu Kyi in a Coup in February. World leaders and critic say its power grab which has  angering much of Myanmar’s population.

The anti-junta movement has also garnered some support from many ethnic rebel groups, which control territory along Myanmar’s border regions.


The Karen National Union (KNU), one of the most prominent, has been among the junta’s most vocal opponents — blasting the military junta for violence against anti-coup protesters.

Clashes with the military in KNU’s territory along the eastern border have increased since February, with the junta deploying air assaults last month. The first instance in Karen state in over 20 years.

The KNU’s Fifth Brigade on Tuesday attacked and razed an army base on the banks of the Salween River — which demarcates a border between Thailand and Myanmar — and the military retaliated with air offensives.

On Wednesday, gunfire and bomb explosions could once again be heard around 9am near Myanmar’s Dar Gwin military base. The military base is located just north of yesterday’s skirmish.

“It is suspected that (Myanmar) soldiers opened fire to protect their base,” said a statement from Sithichai Jindaluang, the governor of Mae Hong Son province which borders Myanmar’s Karen state.

Two Myanmar military airplanes then “launched an air strike and aerial gunfire”, followed by rockets fired from helicopters around noon, he said. The governor added that 68 Myanmar residents crossed into Thailand this morning for refuge.

The day before, a 45-year-old Myanmar national had crossed over in the evening after Tuesday’s fighting to seek medical help for his wounded wrist. He is now “stable”.


KNU’s head of foreign affairs Padoh Saw Taw Nee confirmed the air raids, but said their soldiers “did not attack anything today”.

He also criticised the junta for launching air assaults on an area where there are civilians.

“This is not the proper way for them to retaliate because the air strikes is extensive power compared to the might of (KNU’s militia),” he told reporters.

“They need to target military, but now all we see are civilians getting hurt.” Both the Thai governor and KNU could not confirm any casualties from Wednesday’s air raids.

More than 24,000 people have been displaced from their homes since the military launched its first air strikes in the area last month.

Within Myanmar, the junta’s security forces have killed more than 750 civilians since Feb 1, according to a local monitoring group tracking the death toll.