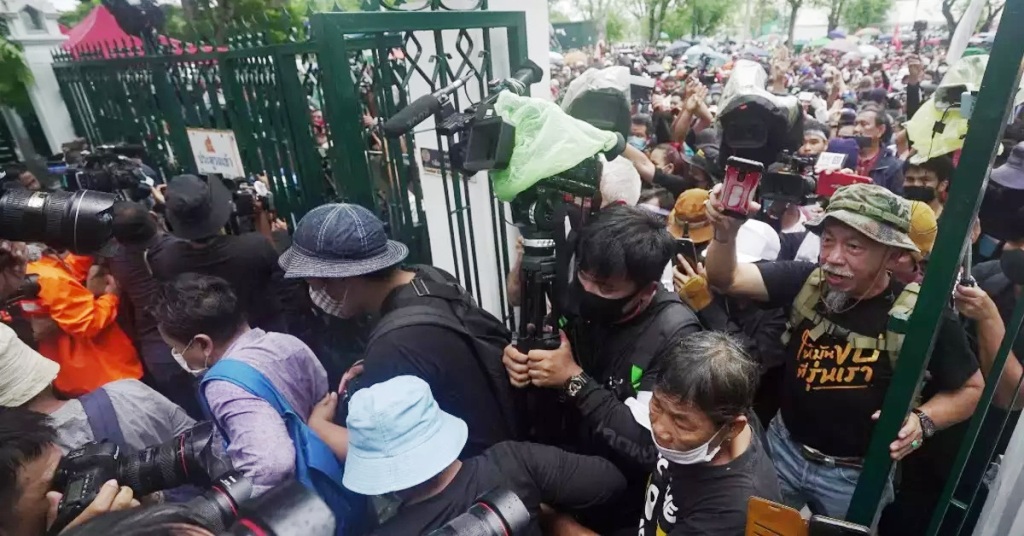 Anti-government protesters forced their way into Thammasat University campus and set up their stage in its football field. The protesters also planned to move the rally to the nearby Sanam Luang field in the evening.

Before storming Thammasat University, demonstration leaders Panusaya Sithijirawattanakul and Panupong Jadnok sought entry from the security guards of the university but to no avail. Then the anti-government protesters pushed the gate open and led followers to the football field. They used a truck carrying loudspeakers as their stage. They planned to move demonstrators to Sanam Luang in the evening.

Meanwhile, Chief of the Metropolitan Police Bureau, Pol Lt Gen Pakkapong Pongpetra issued an order to ban public assembly in a radius of 50 meters around the Supreme Court and Government House. Above all until the end of the anti-government rally.

Bangkok fire fighters parked four fire engines inside Government House because it was a target of anti-government protesters. Security authorities assessed the situations from the 1st Infantry Regiment. The King’s Guard. Security officials were also ordered to monitor the movements of protest leaders. Watching for any party with ill intention. They were also there to estimate the number of protesters from other provinces, Thai media reported.

Barriers were installed to protect the Royal Thai Army headquarters. The headquarters stand on the way from the protest site to Government House.

Bangkok Police said thousands of people had gathered at the campus of Thailand’s Thammasat University. Long seen as a hotbed of opposition to the military and royalist establishment. It was also the scene of a massacre of protesters in 1976.

Sept. 19 is the anniversary of the coup against the populist then-prime minister Thaksin Shinawatra in 2006. Among the protesters were many of his red shirt followers. Veterans of clashes a decade ago with the pro-establishment.

Related Topics:Anti-GovernmentbangkokprotestersThammasat University
Up Next