Thousands of Protesters Rally in Bangkok Against Thai Government
Advertisement 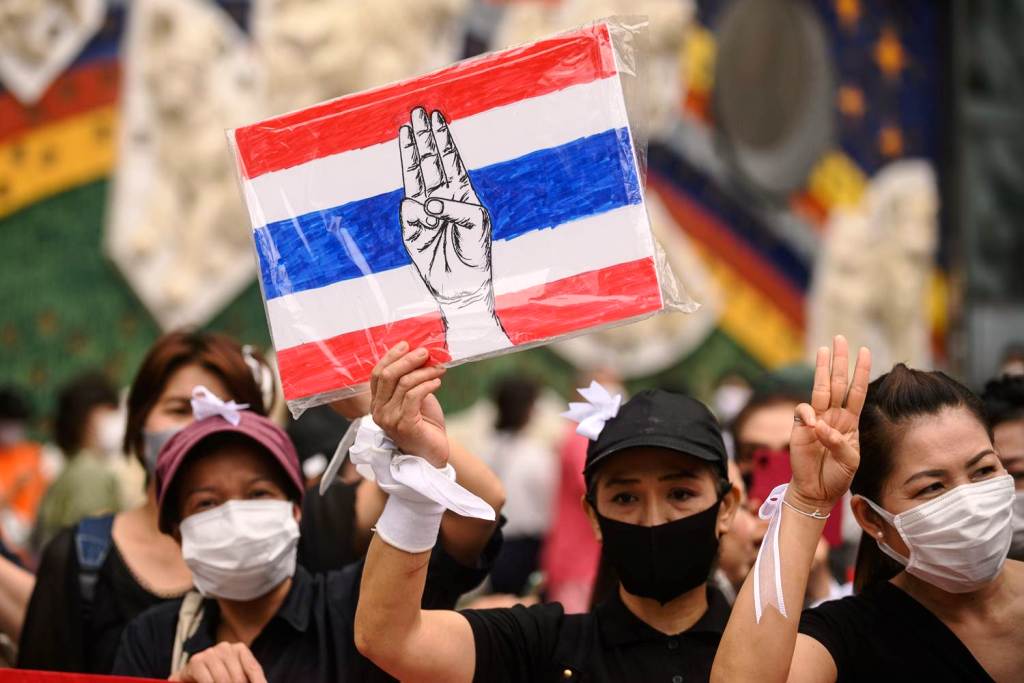 Thousands of protesters rallied in Bangkok to demonstrated against the government of former coup leader and Prime Minister Prayuth Chan-ocha on Saturday. With many also demanding reforms to the powerful monarchy.

“Down with feudalism, long live the people,” was one of the chants. Protests have been building since mid-July to call for the removal of the government. Also a new constitution and elections. They have also broken a long-standing taboo by criticizing the monarchy.

Police said thousands of people had gathered at the campus of Thailand’s Thammasat University. Long seen as a hotbed of opposition to the military and royalist establishment. It was also the scene of a massacre of protesters in 1976.

Under light rain, protesters spilled onto Sanam Luang, a public space opposite the Grand Palace. Sanam Luang in Bangkok is where state ceremonies are traditionally held.

“Today the people will demand back their power,” Arnon Nampa, a human rights lawyer. He has emerged as a leading figure in the protest movement, said on Twitter.

Sept. 19 is the anniversary of the coup against the populist then-prime minister Thaksin Shinawatra in 2006. Among the protesters were many of his red shirt followers. Veterans of clashes a decade ago with the pro-establishment.

“I’m here to fight for the future of my children and grandchildren. I hope that by the time I die, they will become free,” said 68-year-old Tasawan Suebthai. A redshirt protester with amulets round her neck to ward off bullets.

So far the protests have been peaceful. The biggest to date drew more than 10,000 people last month, but organizers expect more this time.

Protesters demand the scrapping of a lese majeste law Thai politics has for years been marked by challenges to the royalist and military establishment. Politicians backed by poor urban and rural voters, and more recently by the student protesters fight the elite establishment.

The military, which proclaims itself the defender of the country’s core institutions, in particular the monarchy, has stepped in to overthrow civilian governments numerous times. Most recently in 2014, citing the need to maintain stability. The leader of the coup was Gen. Prayuth Chan-ocha who is now prime minister. Critics state he stole power by rigged elections in 2019 after rewriting the constitution and then stacking the senate with generals.

Meanwhile, Gen. Prayuth has said the government would allow protests as a form of free speech but that demands for reform of the monarchy were not acceptable. “We are fighting to put the monarchy in the right place, not to abolish it,” one protest leader, Panupong “Mike” Jadnok, told the crowd.

A 20-year-old student, who gave her name only as Waan for fear of reprisals, said it was time to reform the monarchy. “This must end right here.”

Protesters demand the scrapping of a lese majeste law against criticism of the monarchy. They also seek to reduce the king’s constitutional powers and his control over the palace fortune and units of the army.

On Thursday, Prayuth warned the protesters against raising the risks of spreading the novel coronavirus and urged them to put the health crisis before politics.

Protesters jeered when a police officer told a group of them that they could only stay for an hour because of the risk of transmitting the virus. Police in Bangkok said they were deploying 10,000 officers on Saturday.