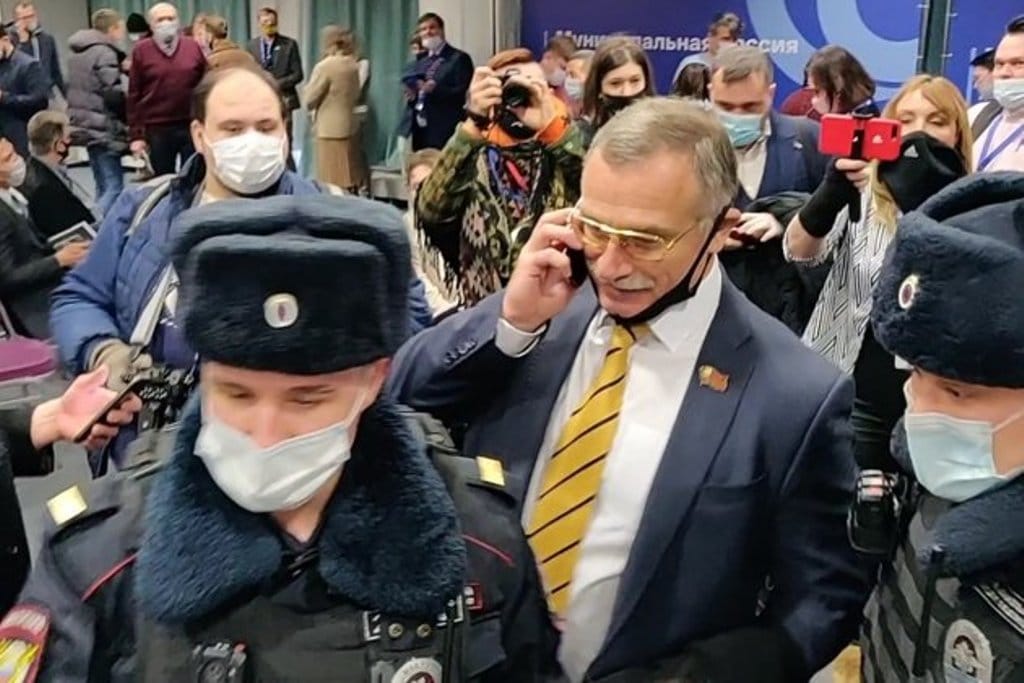 Moscow police detained about 200 people participating in a forum of independent members of municipal councils on Saturday, an action that came amid a multi-pronged crackdown of intimidation against anti-Putin dissent by Russian authorities.

Moscow Police showed up at the gathering shortly after it opened at a Moscow hotel, saying all those present would be detained for taking part in an event organized by an “undesirable” organization. A police officer leading the raid said the detained individuals would be taken to police precincts and charged with administrative violations.

Moscow police said in a statement that they moved to stop the meeting because it violated coronavirus restrictions since many participants failed to wear masks. They said about 200 participants were detained, some of them allegedly members of an unspecified “undesirable” organization.

Police started releasing the detainees after handing them court summons for participating in the activities of an “undesirable” organization, which is an offense punishable by a fine. It was unclear how many remained in police custody on Saturday night.

“Their goal was to scare people away from engaging in politics,” Andrei Pivovarov, a politician who helped organize the forum, said in a video recorded while he was in a police van.

A 2015 law introduced criminal punishment for membership in “undesirable” organizations. The government has used the law to ban about 30 groups, including Open Russia.

An earlier law obliged non-governmental organizations that receive foreign funding and engage in activities loosely described as political to register as “foreign agents.”

The laws have been widely criticized as part of the Kremlin’s efforts to stifle dissent, but Russian authorities have described them as a fit response to alleged Western efforts to undermine the country.

Russian President Vladimir Putin’s most determined political foe was arrested on Jan. 17 upon returning from Germany, where he spent five months recovering from a nerve-agent poisoning that he blames on the Kremlin. Russian authorities have rejected the accusation.

Last month, Navalny was sentenced to 2 1/2 years in prison for violating the terms of his probation while convalescing in Germany — charges he dismissed as a Kremlin vendetta. His arrest and imprisonment triggered a wave of protests across Russia, to which the authorities responded with a massive crackdown.

The government has intensified its crackdown on the opposition ahead of parliamentary elections set for September as the popularity of the main Kremlin-backed party, United Russia, has dwindled.