Man Stomped and Gored to Death by a Wild Elephant
Advertisement 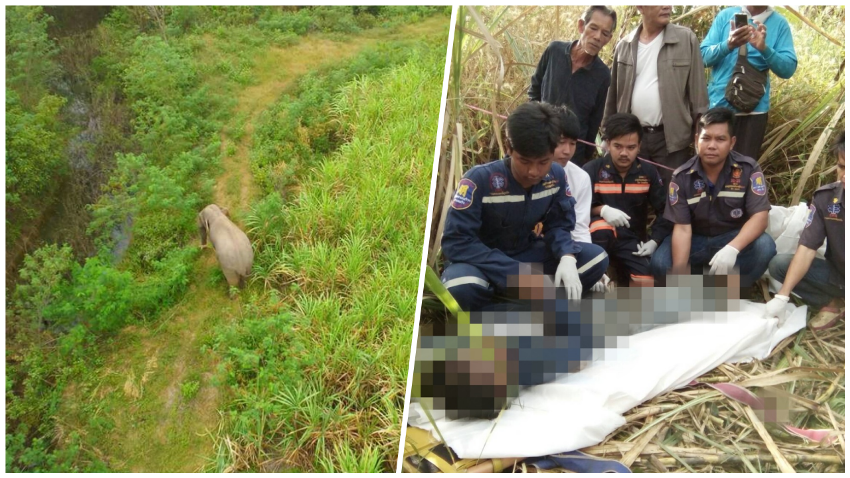 A 53 year-old man was gored and then stomped to death by a wild elephant while he collecting mangoes in a forest area behind his village in Tha Takiab district of Chachoengsao.

Relatives told police that Chalermphol Sukthawee, 53, left his house about 3pm on Thursday. When he had not returned home and could not be contacted, relatives went looking for him.

He was found dead near a mango tree in a rubber plantation near a forested area at the base of Langka mountain. Relatives informed police, who responded to the call about 7:45pm.

Pol Lt Col Suchart Yaemsak, from the Tha Takiab police station, said Chalermphol had a fractured skull and other injuries. Wild Elephant tracks were also found about 10 meters from his body. Meanwhile, Large public gatherings are currently prohibited in many places to prevent the spread of the new coronavirus. Consequently that didn’t stop a group of Asian elephants from partying in a field in Yunnan Province in China. Where they found and drained vats of corn wine. Two elephants drank so much wine that they passed out in a tea garden.

A photo of a drunk elephant — lying curled up on his back on a dirt bed amid the greenery — went viral after it was shared on Twitter by Parveen Kaswan. A conservationist and an Indian Forest Service officer.

Kaswan mentioned in the tweet that wild elephants have a taste for booze. Saying that these particular elephants’ had turned to alcohol “to sanitize [their] trunks,” and were sleeping off the aftermath.

Drinking Alcohol Even in Small Groups Prohibited in Thailand