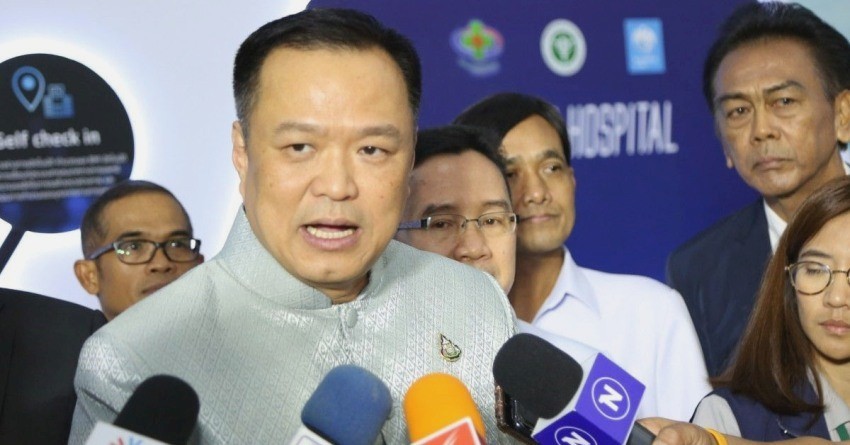 Thailand’s Health Department Minister is once again in the hot seat for making this time for criticizing medical staff. Making a controversial remark about medical staff infected with the coronavirus.

The Bhumjaithai Party leader told reporters no health staff caught the virus while on duty.

“As far as I know from a report, no doctor has been infected while they were treating Covid-19 patients,” he said. When asked about the Health Department’s measures to better protect medical staff.

“We’re not happy with some health department staff who do not take good care of themselves. They should have set an example for others,” he said.

The Health department reported earlier at least 11 health personnel were among the new infections.

People reacted to his controversial remark on social media, making the “#anutin” hashtag top-trending on Twitter. “Thank you for your advice,” one wrote on her Twitter account.

The minister later came out to apologize. In an online video clip, he said he was under pressure and had not carefully listened to the question from reporters.

“I have no intention to criticize anybody. I admire all of them,” he said.

One Twitter account wrote after his video appearance: “Too late though. If you don’t have something nice to say, don’t say anything at all.”

Mr Anutin is no stranger to controversial remarks, according the Bangkok Post.

In February, he apologized to the public for saying that a group of foreigners should be “kicked out of Thailand” for refusing to wear face masks.

He shut down his Facebook account on March 4 after posting a message that said all visitors from certain countries would face mandatory self-quarantine for two weeks when the announcement had not yet been made. He later claimed it was not him who posted the message.

The minister later returned on March 12 with the @anutin_c Twitter account which was also closed later after he wrote the western tourists he saw during a visit to Chiang Mai were dirty.

Mr Anutin was seen as being sidelined after Prime Minister Prayut Chan-o-cha declared the state of emergency effective on Thursday. Under the structure of the new committee handling the coronavirus crisis, Gen Prayut has full authority to handle the situation.

While related ministers are on the committee, it is permanent-secretaries who were appointed chiefs of the operations to take orders directly from Gen Prayut.