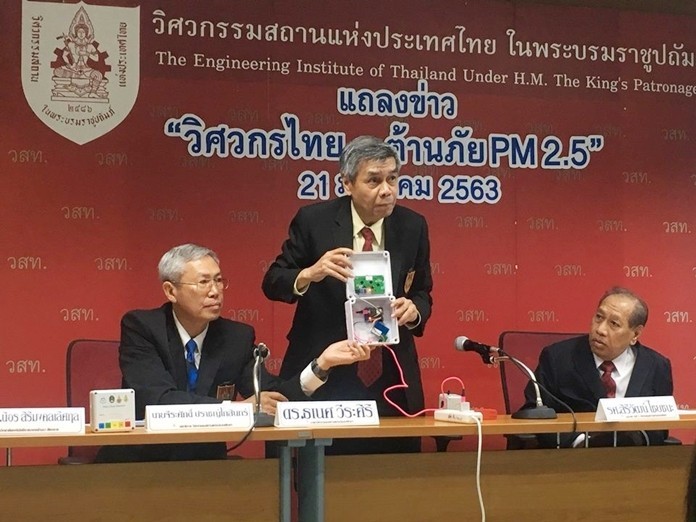 The Engineering Institute of Thailand (EIT) has offered training for public members to make DIY air monitoring PM2.5 sensors as smog levels rise.  EIT has worked with Yakkao group in producing the DIY air PM2.5 sensors. Furthermore they will be given to hospitals and schools as need.

Yakkaw group comprises academicians from universities, the Federation of Thai Industries, the Thai Chamber of Commerce and the public.

Fifty PM2.5 sensors were distributed to schools in Chiang Rai. They will provide real-time information on the PM2.5 dust level in each particular area. The data from the PM2.5 sensors will also be sent to the Yakkaw group for effective real -time monitoring.

Even more the pilot project gave satisfactory results and more PM2.5 sensors will be produced for distribution.

Anyone, who is interested in making the DIY dust sensors can register for the first training on Jan 28. Application can be made to the EIT via email: [email protected] or phone 02-1844600 ext. 517.

Fifty applicants will be accepted and they have to buy their own equipment, worth between 1,800-2,200 baht to make one dust sensor.

Thanet also said additional 100 sensors will be made this month for distribution to the North; and the Central region; including Bangkok.

Above all the information from the PM2.5 dust sensors will also be sent to the Pollution Control Department. Where analysis of dust concentration in each respective area will be studied.

Also many celebrities have posted evidence of the fires from Air Visual and other air pollution apps. As well as data from NASA which clearly shows the fires and the spread of the smoke. The evidence should be clear to anyone, except authorities and pollution control departments.

Who appear to be unable to read the information and fiddle while Bangkok chokes.

Former Ms. Thailand World 2014, Meya Nonthawan, said she visited a hospital two days after her return to Bangkok from an overseas trip.

“I am now resting at home with an air purifier working.”

Rapper Apisit Joeyboy Opasaimilikit asked, in his Facebook post, “I wonder why no one is worried? Are those responsible not worried about us? It is understandable that the pollution comes at this time of the year and then goes away, but no apparent action is being taken at this critical time.”

Actress Atthama “Bowie” Chivanichapan’s Instagram page also shows her wearing a face mask. She says she felt an irritation in her throat after going outdoors.

‘Narisara Student’ said, on her Facebook page, that she blames PM2.5 dust and pollution for her dog’s respiratory health problems.