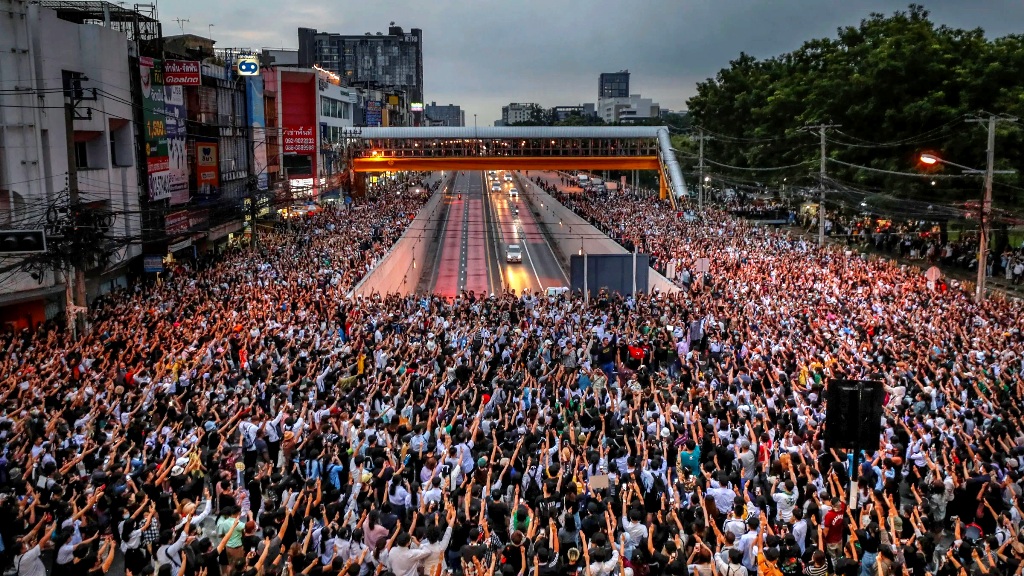 Market analyst said the benchmark stock index slid 1.8% to 1,212.12 as of 11.18am in Bangkok, its lowest level since April 16. The measure has erased almost 5% since Oct 14, when organizers called for the latest round of anti- government demonstrations against Prime Minister Prayut Chan-o-cha.

“The stock market fears uncertainty from the anti-government protests. Which will be prolonged and may lead to some violence,” said Vathan Jitsomnuk, a market analyst at Country Group Securities Plc in Bangkok. “Defensive investors should wait for a clearer situation before buying shares again.”

Tens of thousands of anti-government protesters rallied in Bangkok and throughout Thailand for a fifth day. Defying the Prime Minister’s a ban on gatherings and the threat of crackdowns by the police.

Lawmakers are set to meet on Tuesday to decide on convening a special parliament session. Above all to discuss ways to end the escalating anti-government protests. Protesters are calling for Gen Prayut’s resignation, constitutional changes, and also reform to the monarchy.

BTS Group Holdings Plc and Bangkok Expressway and Metro Plc each fell more than 5% Monday. The mass transit operators were ordered to shut some services over the weekend to help stop demonstrations. Central Pattana Plc and Central Retail Corp Plc, which operate shopping malls in Bangkok, also dropped more than 6% each.

Escalating anti-government protests in Thailand could push one of this year’s worst performing stock markets even lower. Some investors fear political instability adds another layer of risk to an already fragile tourism dependent economy.

Thai stocks were Asia’s worst performers this week. Down 2.6%, as protests hit the capital Bangkok where tens of thousands of people defied the Prime Minister’s ban on demonstrations.

Thailand has already suffered a record $8.8 billion in equity outflows over the first nine months of this year, exchange data shows. Above all as the Covid-19 pandemic wrecks the travel exposed economy and finance and industry-heavy stock index.

The protesters have for months been seeking to remove Prime Minister Prayuth Chan-ocha. Gen, Prayuth has vowed to stay on and last week issued an emergency decree, prohibiting gatherings of more than five people.

At the same time the economy has suffered its biggest contraction in 22 years. The stock market has dropped 22% since the start of the year. Due partly to a lagging currency it is among the worst performers globally in dollar terms.

That the baht has held up this week shows that at least some faith in a longer-term recovery remains.