Student Protesters in Thailand Label their Critics as Dinosaurs
Advertisement 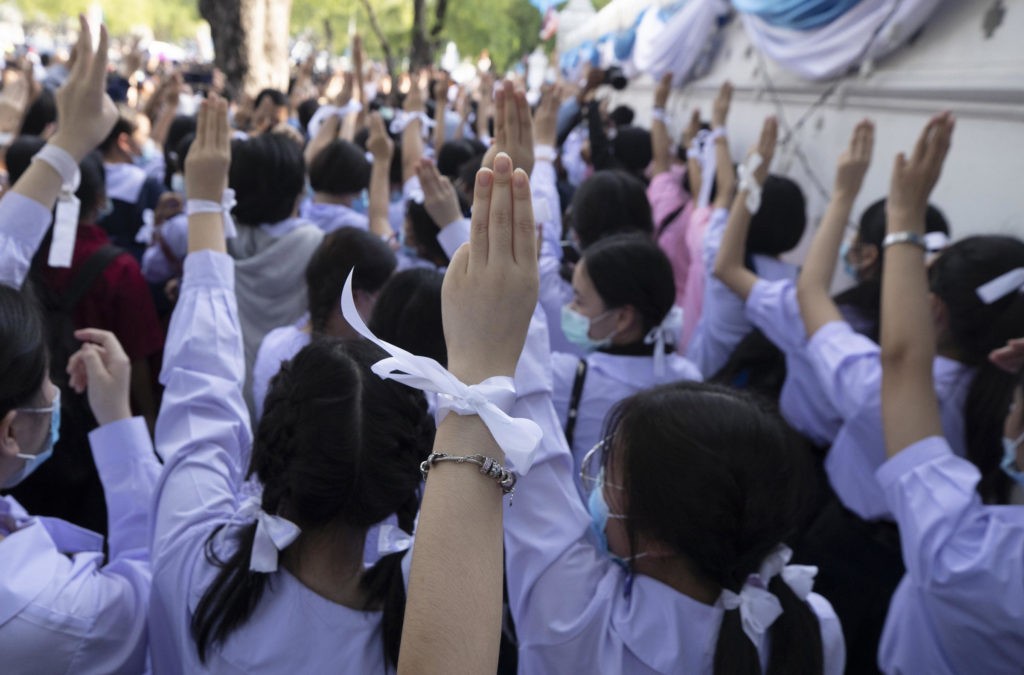 Student protesters in support of the Free People movement in Thailand, have labelled their critics, many of whom come from older age groups, as dinosaurs. A war of words has broken out in Thailand, particularly on social media.

The Thai youth-led protests began with three demands: House dissolution, amendment to the constitution and an end to the intimidation of state critics. Later, a 10-point proposal to reform the monarchy was announced at the Thammasat gathering on Aug 10. Sparking yet more controversy in an already divided Thai political arena.

The Free Youth group has also expanded into the Free People group and over 10,000 people joined the rally at Democracy Monument on Aug 16. The repetition of their calls has also drawn warnings and opposition from those who say politics must be kept out of schools.

Eyebrows were raised again over the past week as anti-government activities spread to even more junior school levels. With the three-finger salute and the use of white ribbons making appearances in many schools around the country.

Respect the civil rights of the students 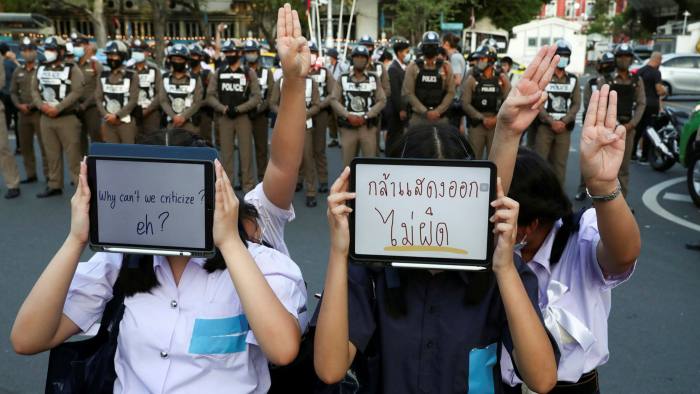 Arthitaya Pronprom, 18, a leader of political rallies at Mahidol University, told the Bangkok Post in her opinion, politics is everyone’s business. “Everyone’s voice should be equal and everyone should have an equal opportunity to have their opinion heard. However, in Thailand, students and teenagers are being attacked by older members of society who say that we are politically naive or brainwashed,” she said.

Ms Arthitaya said she wants adults to respect the civil rights of the students as well as realize that students have minds of their own.

“Students nowadays learn about Thai political history, which is not taught in schools, through the internet and social media. It may be that we have more sources of information than they ever had. We absorb the facts and realize numerous problems are hidden under the carpet in this country. We see injustice and inequality and we want change,” she argued.

Ms Arthitaya said many among the older generation seek to avoid vigorous face-to-face arguments by changing the subject or making light of it, while she and her peers are more inclined to speak out against what they perceive to be injustice or mistreatment.

“Just because we have a different vision of how Thailand ought to be in the future, it doesn’t mean we hate the nation. The tensions between the generations can be eased if we start to listen to each other. The government should respect students’ freedom of expression and be open-minded towards our demands,” she said.

Students in Thailand risk-taking behaviour is a good thing 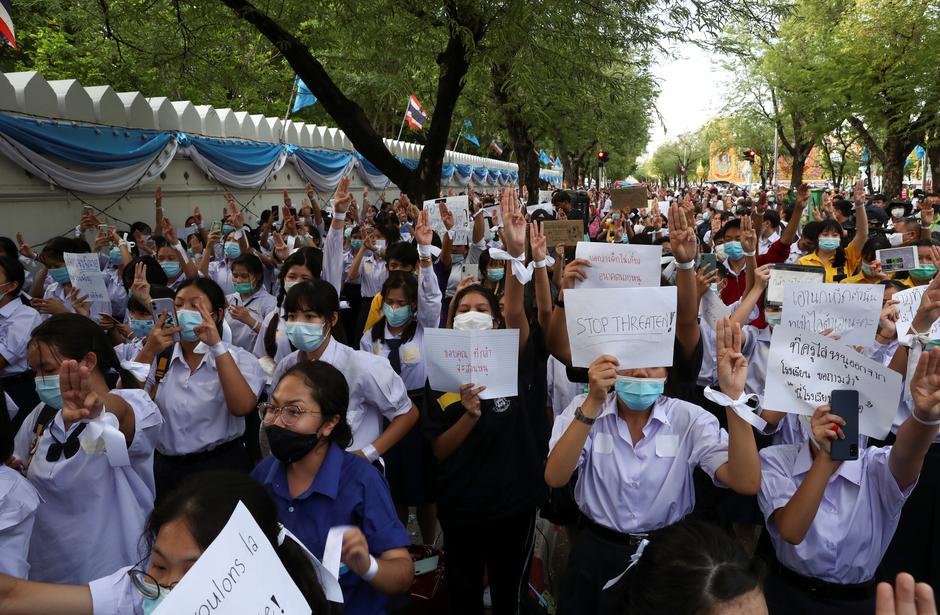 Assoc Prof Sirichai Hongsanguansri, a specialist in child and adolescent psychiatry at the Faculty of Medicine, Ramathibodi Hospital, said each generation is shaped by a different set of circumstances. Attributing the student protests to a climate of growing inequality and injustice.

When asked whether they are being manipulated by others, Assoc Prof Sirichai said he believed that was a myth. “Their brains can analyze and grasp abstract concepts, such as injustice, at this stage. In fact, anyone can be gullible regardless of their age. They may be careless and single-minded due to their limited experience. But their risk-taking behaviour is a good thing,” he said.

Suriyasai Katasila, dean at Rangsit University’s College of Social Innovation, and a former coordinator of the yellow-shirt People’s Alliance for Democracy and co-founder of the Action Coalition for Thailand (ACT), has called the student movement a “new frontier” in Thai politics which transcends the color-coded conflicts of the past.

Yuttaporn Issarachai, a political scientist from Sukhothai Thammathirat Open University, said while the generation gap might also be a factor. Its ideologies and the will to instigate change that brought the protesters together.

However, he also noted that political groupings of the past have also sought to align themselves with the young. Suvinai Pornavalai, a former economics lecturer at Thammasat University, warned that student protests against authorities are creating a “cultural earthquake” in the same vein as China’s Cultural Revolution.

Wasana Wongsurawat, a history lecturer at Chulalongkorn University, however, dismissed the comparison as well as the context, saying that Thai student protests actually show the government’s lack of cultural power over the younger generation. “Its attempts to manipulate cultural production have not been successful.

For example, textbooks portray Prime Minister Prayut Chan-o-cha as a great leader. But schools are no longer the centre of knowledge when what is on the internet is apparently more convincing,” she said.

Clashes between liberal and conservative values 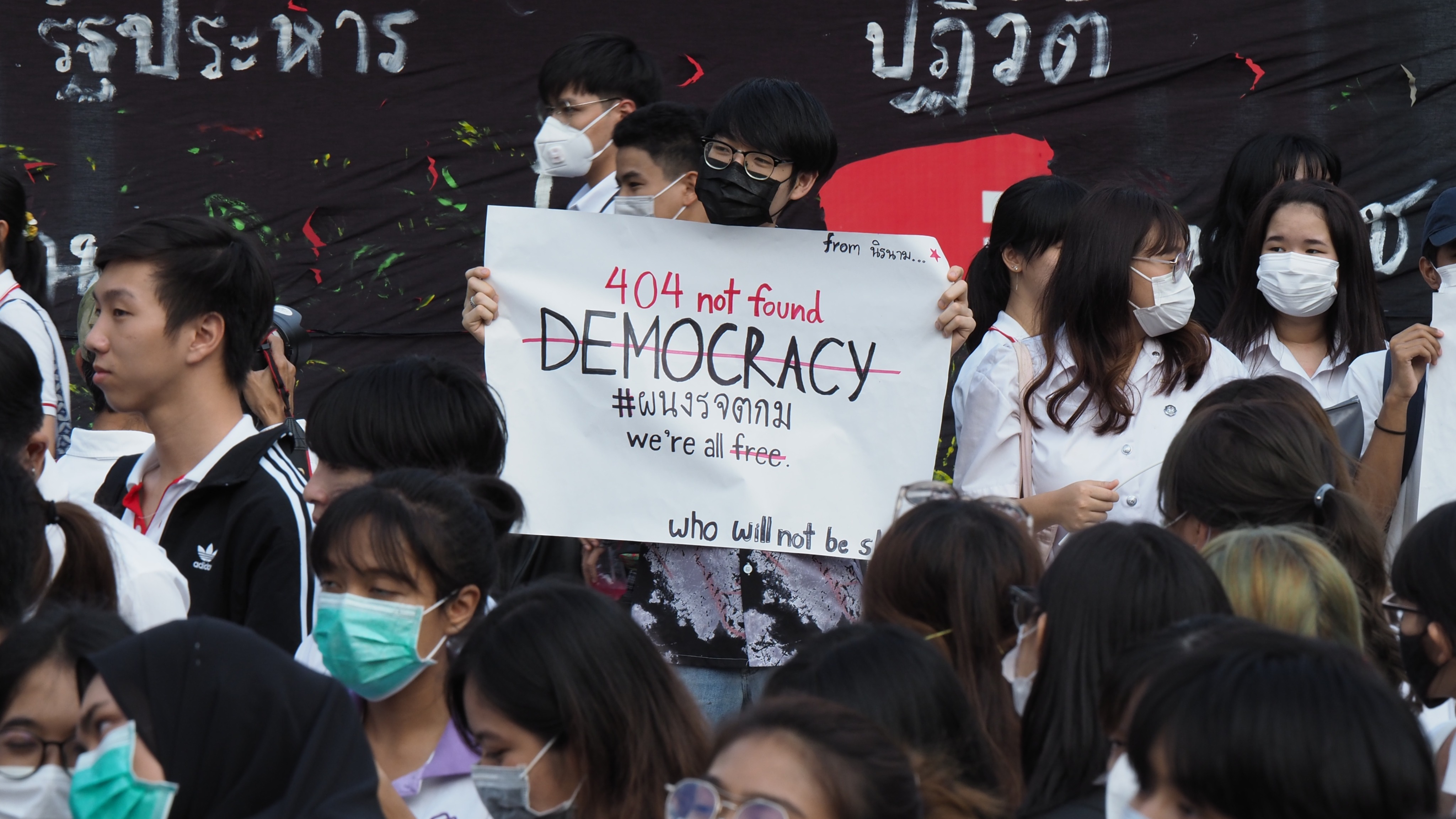 Kanokrat Lertchoosakul, a political science lecturer at Chulalongkorn University, challenged the tokenisation of the youth-led demonstrations as a generational conflict, stressing that such a discourse is more of an attempt to discredit the movement than it is an effective refutation of its arguments.

“They are clashes between liberal and conservative values. These progressive students are the by-products of liberal efforts over the past 20 years. They grew up in families who encourage out-of-the-box thinking. In addition, they are digital natives used to robust debate on social media,” she said.

Asst Prof Kanokrat cited examples from her research in which she has interviewed over 80 students who joined pro-democracy rallies in seven provinces since the flash mobs began in February.

One student called her school is “the very agent of authoritarianism”, while another described her alma mater as “hell” over its fussy rules on hairstyles, said the professor.

Asst Prof Kanokrat said student protesters know about the Oct 14, 1973 uprising and the Oct 6, 1976 massacre, but believe the expression of political opinions does not necessarily provoke violence and the potential for violence is being played up by ill-intentioned adults who oppose their views.

Mr Suriyasai argues that “It is time to implement national reforms where possible to ease the pressure. Reforms are long overdue and they should no longer be used by parties to vouch for votes in an election.

“If we look carefully and deeply, we will see problems in schools. Opening up for children to discuss and find solutions is a good thing. Creating safe spaces for political discussion in schools is a smart solution by the education minister and it might hopefully lead to effective education reform.”

“Don’t just organise hearings. It is reforming government policies that will help defuse tensions,” she said.

While on the 10 demands related to the monarchy, Mr Suriyasai said the question is not if the issue can be raised, but how it can be discussed in a reasonable and proper manner.