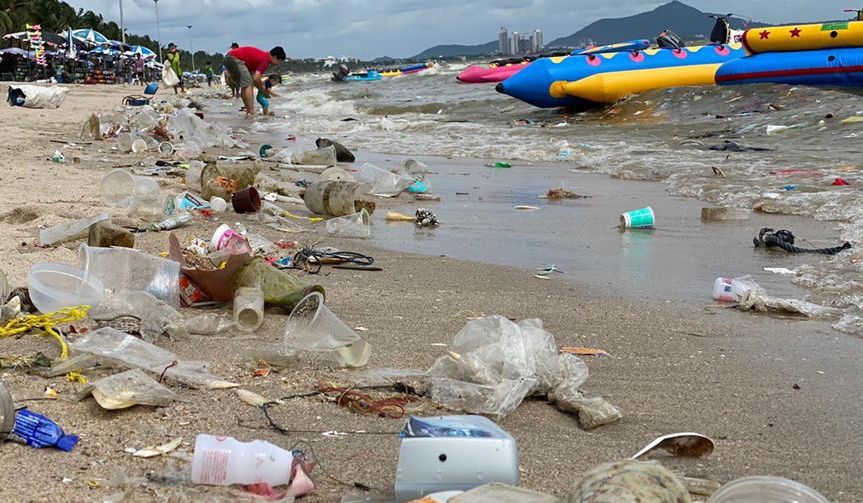 Narongchai Khunplome, mayor of Saen Suk municipality, also disputed the claim that tourists were littering the beach. He said much of the garbage seen in the photos came from Bangkok’s waterways. Trash dumped into rivers and the sea by urban residents, and then carried to Bang Saen by ocean currents.

“We’re cleaning it up everyday,” Narongchai told Khaosod News. “Most of the trash comes from Bangkok and then washes up on the beach. Only about 30  percent is litter from tourists.”

Photos of the trash-ridden Bang Sean beach were posted by British expat Richard Barrow on Friday. Narongchai later wrote on his Facebook that the phenomenon occurs every year from July through September. He blamed the trash event on southwestern monsoon winds.

“I have seen this amount of trash since I was young. It hasn’t decreased at all,” Narongchai wrote. “Some days have huge amounts of trash due to strong winds and high waves.”

Most of the trash is traced to the Chao Phraya estuary that flows into the Gulf of Thailand. “Trash is coming from the ocean, from people who throw trash into city canals and into roads and they end up into the sea,” the mayor wrote. “It never changes. Poor Bang Saen, having to be the trash can for all this.”

A sea turtle pregnant with more than 200 eggs died on Bang Saen Beach from ingesting trash, Narongchai said.  On Saturday, Barrow posted his concern that his photos may cause him troubles when he renews his visa.

“Memo to future self: Try and not post anything controversial two weeks before your extension of stay in Thailand is about to expire,” he wrote. However, Narongchai said by phone that he held no grudge against Barrow’s.

“I have more of an issue with more political pages that re-shared the post, not Richard himself,” the mayor said.

Bang Saen beach reopened in June along with other beaches in the Chonburi region. After months of closure due to the coronavirus pandemic.

Bang Saen Beach is in Tambon Saen Suk, Mueang Chonburi District, Chonburi Province, eastern Thailand. It is about 108 km east of Bangkok. Regarded as a very popular beach because it is closest to Bangkok and not far from Pattaya a world-class attractions as well