Phuket Vegetarian Festival to Go Ahead Despite Virus Worries
Advertisement 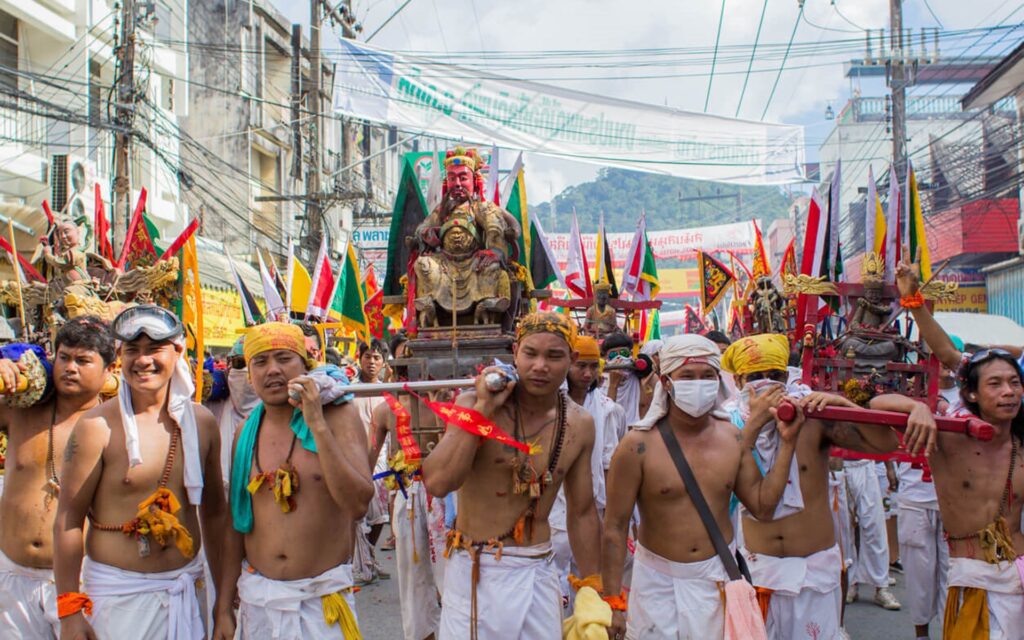 The famous Phuket vegetarian festival will go ahead this year after organizers promised strict enforcement of social distancing. Principles designed to help prevent the resurgence of Covid-19 in the province.

“We will seriously enforce social distancing measures and require all participants to wear face masks,” he said.

Thousands of celebrants converge on Phuket each year for the colorful event, one of the most popular vegetarian festivals in the country. Devotees of the Hindu god Shiva give up meat for the festival and some practice self-mutilation. Piercing their cheeks with swords, some walking on hot coals and others climbing ladders made of knife blades.

Furthermore the festival this year will be the first on the resort island since the coronavirus pandemic began.

The kingdom has so far recorded 3,516 cases of Covid-19, and Phuket was the second hardest hit, after Bangkok, with 227 cases. The capital has logged 1,557 infections to date.

History of the Phuket Vegetarian Festival in Thailand The Phuket Vegetarian Festival is a colorful annual event held on the 9th lunar month of the Chinese calendar. Usually in September or October.

The vegetarian festival is famous for its ‘extreme’ celebrations. These include acts that invoke the gods, from fire walking to body piercing. Acts of self-mortification are undertaken by participants who act as mediums of the gods. These have become more spectacular and daring as each year goes by.

While the origins of the Phuket Vegetarian Festival are unclear, it is commonly thought that it was brought to the island by a wandering Chinese opera group. The group allegedly fell ill from a malaria epidemic. Even more one of the performers was sent to China to invite the Nine Emperor Gods (known as the Kiu Ong Iah) to Phuket.

The Chinese followed the tradition of refraining from eating meat, drinking alcoholic drinks, engaging in sex, quarreling, telling lies and also killing. This was to ensure the purification of the mind and body. The opera group made a complete recovery and the epidemic ceased. Since then, the people of Phuket, Thailand have continued to celebrate the festival.

The vegetarian festival was also meant to honour the gods and express the people’s happiness at surviving what was, in the 19th century, a fatal illness. Subsequently, the festival has grown and developed into a spectacular yearly event in Phuket. Furthermore it draws thousands of visitors each year, many of whom come from China and Asian destinations.