Meat Loaf, Rocker and ‘Bat Out of Hell’ Singer, Dies at 74

Meat Loaf, a renowned US singer and actor known for hits such as Bat Out Of Hell, died at the age of 74. Loaf, whose real name is Michael Lee Aday, has sold more than 100 million albums worldwide and starred in more than 65 films. On Facebook, his family announced his passing, and remembered him as an “inspirational artist and a beautiful man.”

On Friday, January 21, Meat Loaf’s family released a statement on Facebook that read, “Meat Loaf passed away tonight surrounded by his wife Deborah, daughters Pearl and Amanda, and close friends. His incredible career spanned six decades and saw him sell over 100 million albums worldwide and star in over 65 movies, including Fight Club, Focus, Rocky Horror Picture Show, and Wayne’s World. Bat Out of Hell is still one of the best-selling albums of all time..”

The musician’s family thanked his fans for their overwhelming love and support, adding, “From his heart to your souls, don’t ever stop rocking. He meant so much to you all. We appreciate your love and support as we move through this difficult time in the loss of such an inspiring artist and beautiful man.!”. 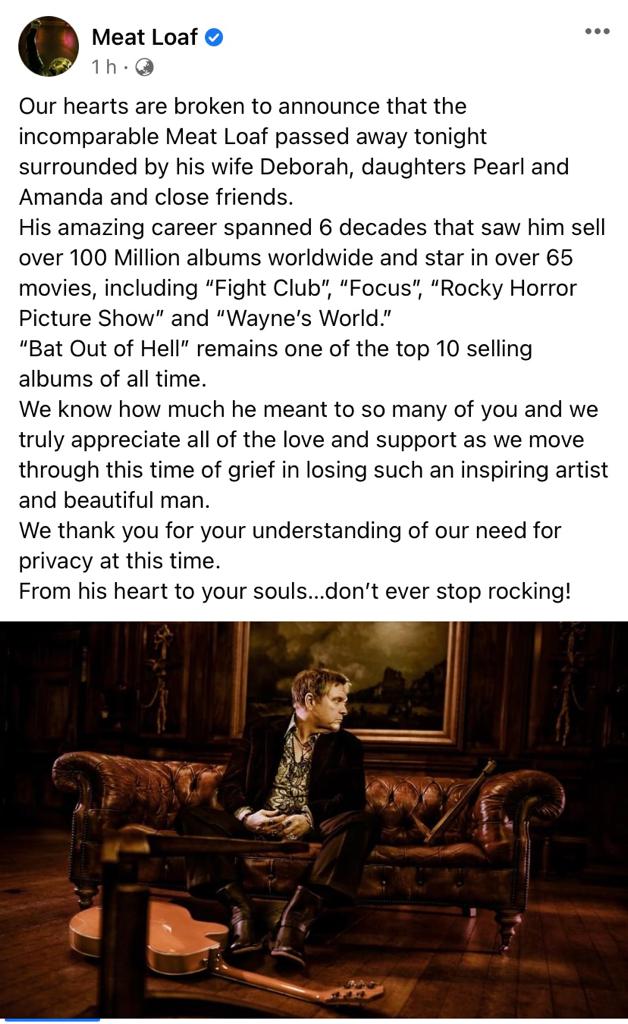 The Daily Mail reports that Meat Loaf openly spoke about health issues that plagued him (notably Asthma) and even caused him to collapse on stage during a concert in Pittsburgh in 2011 and the Wembley Arena in London in 2003. It was even his fans who were notified about his health at a Kensington press conference.

As a rock music pioneer, he had hits like Dead Ringer For Love, Bat Out Of Hell, and I’d Do Anything For Love to his credit.