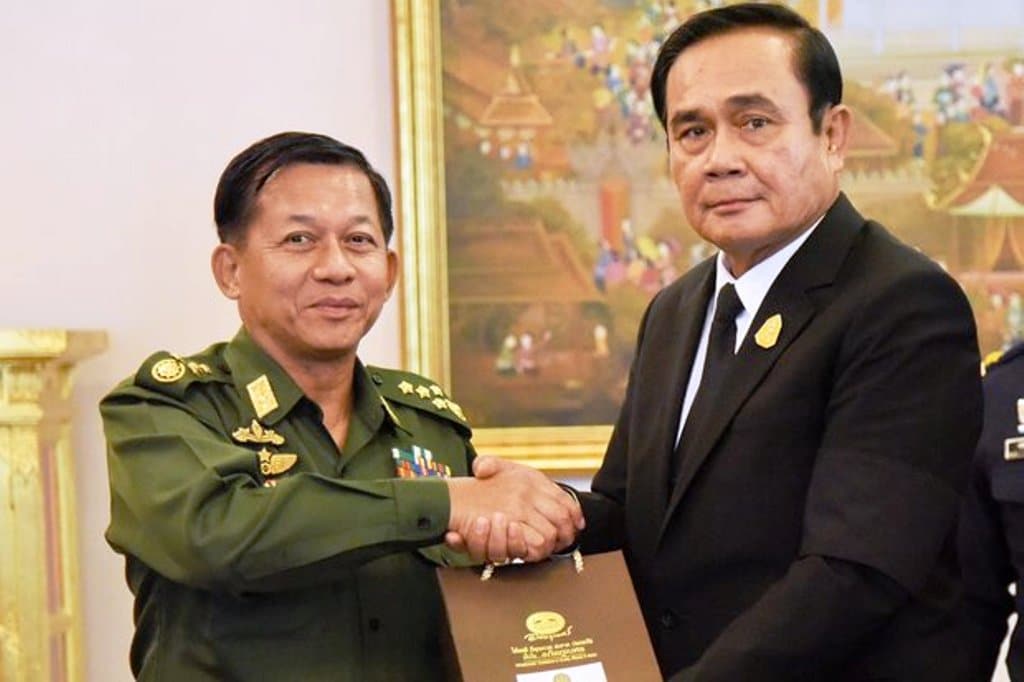 Thailand’s Foreign Ministry has slightly hardened its language on Myanmar by saying it is “gravely concerned” about escalating bloodshed since a Feb. 1 coup, but close military ties and a fear of a flood of refugees means the government of Prime Minister Gen Prayut Chan-o-cha is unlikely to go further.

That leaves Gen Prayut and his government out of step with members of the 10-strong Association of Southeast Asian Nations (ASEAN). The other ASEAN members are seeking to ramp up pressure on Myanmar’s military junta. However Gen Prayut’s stance could also position his government as a possible mediator, however many analysts remain skeptical.

“(Thailand’s position) is difficult, but I think there is an opportunity because we’ve become an important partner,” Panitan Wattanayagorn, a political scientist at Bangkok’s Chulalongkorn University, told Reuters.

The closeness of the Thai and Myanmar armies was underscored by a request from Myanmar’s junta leader, Min Aung Hlaing, to Thai Prime Minister Prayuth Chan-ocha to “support democracy” within days of ousting elected leader Aung San Suu Kyi.

Prayuth, who voiced that support, had himself seized power in a 2014 coup when army chief, before taking on his current civilian role in 2019 and rejecting opposition accusations that the vote was manipulated.

The personal relationship began much earlier: within armies that appear to have long put behind them the historic rivalry between countries that used to be known as Burma and Siam.

In 2018, Min Aung Hlaing was awarded Thailand’s King Grand Cross of the Most Exalted Order of the White Elephant “in honour of the support he has shown for the Thai military,” the Bangkok Post said at the time.

The Brotherhood of Generals

“For them, the military brotherhood is very, very important,” said Lalita Hingkanonta, a history professor at Thailand’s Kasetsart University. “I don’t think that the escalation of violence will change the decision of the Thai government to accept more refugees…I think they just want to be friends with Myanmar more.”

Thailand potentially has more at stake in Myanmar than any other member of ASEAN, as it shares a 2,400-km (1,500-mile) border that is also Myanmar’s longest with any neighbour.

The geographical position, and a tradition of cautious diplomacy have been reasons for its particular care in remarks on the coup – only toughening its wording slightly after the civilian death toll topped 500 in Myanmar’s crackdown on anti-coup protesters.

Thailand’s wording has still been much milder than that of ASEAN democracies Indonesia, Malaysia, the Philippines and Singapore. The border risks were highlighted by a surge of several thousand refugees this week fleeing bombing by Myanmar’s forces of ethnic Karen rebels, an exodus reminiscent of the tens of thousands who fled Myanmar’s wars in previous decades.

Although Thailand denied that the latest refugees were being pushed back, they complained of having been blocked by Thai border guards, while a local Thai official told a meeting that it was official policy to bar their entry.

While Thailand might come under diplomatic pressure to accept refugees or take a tougher stance, Lalita said Prayuth’s government was unlikely to be moved.

“They would do something to respond to the international pressure, they would do some small things, just to show that, hey, we are responding very well to your concern. But that’s it.” Business links are also strong.

Foreign direct investment by Thai businesses ranks behind only China and Singapore, with more than $11 billion approved since 1988.

Annual cross-border trade stood at more than $9 billion in 2019 and many Thai businesses rely on Myanmar migrant workers – who officially number 1.6 million.

Thailand matters even more for Myanmar, accounting for nearly a quarter of exports in 2019, mostly natural gas.

But Thailand was unlikely to use its potential economic leverage with any sanctions on trade, said Piti Srisangnam, of the ASEAN Studies Center at Chulalongkorn University.

He suggested Thailand might best pursue diplomacy behind the scenes, to try to encourage Myanmar’s generals to curb violence and launch talks with ousted civilians now locked up or branded as traitors.

“If you have one friend you’ve known for a very long time, and one day he commits murder, it doesn’t mean you won’t be friends with him, right?” he said. “You are still friends, but the best thing is to talk to him, to show that the thing he has done is very wrong.”