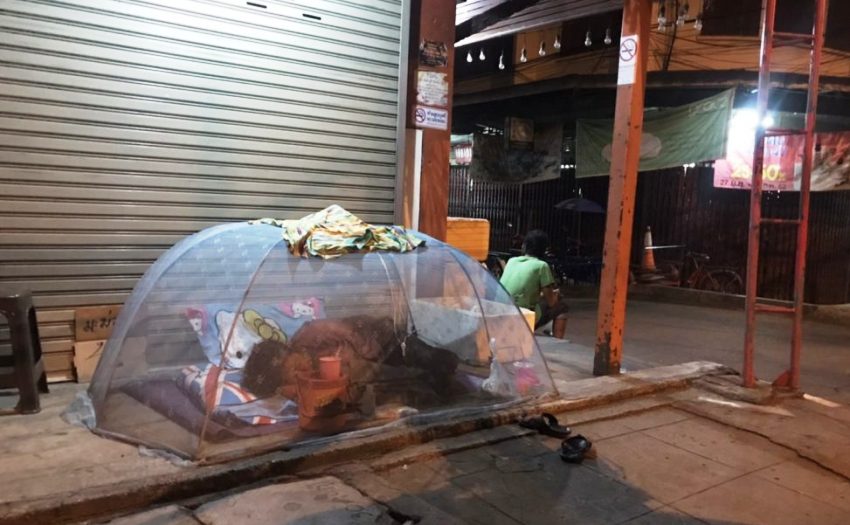 Thai Authorities actions enforcing the State of Emergency lockdown are being called into question on Thai social media. Many netizens are posting comments,  photos and videos of Thai officials taking the lockdown a bit too far.

Yesterday Police in Chiang Mai arrested two homeless men recently for breaking curfew, leading to outrage on social media. The man had no money to pay the fine and were placed in jail following a court order.

Pikanet Prawang, a human rights lawyer says authorities need to use a little more common sense. He told Thai media that local volunteers had alerted him to the plight of the 2 homeless men.

There have been reports of other cases of the homeless being arrested for breaking state of emergency curfew, Pikanet said

On Monday a woman wishing to give away free food to the needy was also treated unfairly by Thai Officials. She broke down on Facebook after city officials seized food that she planned to give hungry people in Nakhon Pathom Province. Ms. Fern Pannamjai posted Facebook that she was giving away 250 Packages of Pork Rice Soup and 50 bags of rice.

When the time arrived and people lined up waiting for the food, officials from the Nakhon Pathom Municipality came and seized all the food. The officials stated that if the giveaway was to continue, it would be breaking the state of emergency decree. Thailand’s Supreme Patriarch has asked temples across the nation to help those in need during the pandemic. People who are jobless and exempt from the governments cash giveaway are lining up at temples nationwide. Seeking free food and water as their income has dried up.

The Thai government has put millions of Thai out of work due to closures and restrictions under the state of emergency decree.  Many Thai lived month to month prior to the lockdown that has devastated their lives. Sadly in some cases citizens have taken to stealing. In northeastern Thailand a single mother forced out of work by the lockdown was arrested for stealing money. Telling Thai authorities she desperately needed to feed her hungry baby. Police arrested Aphaporn Kerdtruat, 25 at a rented room and charged her for stealing 1000 baht.

She told police that she was a hairdresser but was forced out of work when her beauty salon was closed.  Ms Aphaporn said she took her year-old baby to buy milk on Sunday and had only 120 baht left.

She told police she saw a wallet in a small compartment at the front of a motorcycle parked outside a shop. According to Thai media she knew it was wrong but stole it because she was desperate for money to feed her child.

State of Emergency has destroyed jobs and lives

Meanwhile, Thailand’s job losses may reach 10 million if the coronavirus outbreak continues for a few months, a business advisory council said on Monday.

“We think about 7 million jobs have been lost already, and the figure will hit 10 million if the outbreak drags on for 2-3 months,” Kalin Sarasin, a council member and the head of the Thai Chamber of Commerce, told a briefing after a meeting. The country has a workforce of about 38 million.

The government says it is now deciding how and when to relax restrictions so they can announce before the expiry of the state of emergency at the end of this month. Allowing certain business to reopen under strict guidelines of social distancing.

Thailand, which has recorded 2,826 cases of infection and 49 deaths. The government imposed a nationwide lockdown closing malls, shops and also businesses. Millions of informal workers have lost their jobs in the tourism, entertainment, food and service sectors. Many have applied for a monthly cash handout from the government, though only half have received approval.

How Can People in Thailand “Stay at Home” if they are Homeless?

Striking Lack of Progress on Environmental SDGs in Asia-Pacific