In Thailand, the Men in the Thai Armed Forces Have the Blues
Advertisement 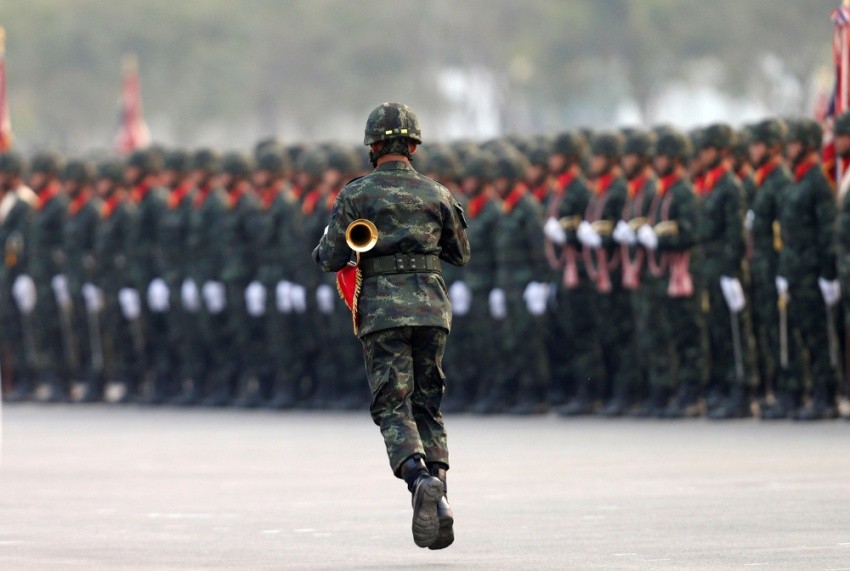 There’s shockingly little push back to the Thai Armed Forces’ self-serving actions. Coup d’etats in 2006 and 2014 were met with resignation. The electorate showed up to vote in referendums to approve army-drafted constitutions, accepting that it was the best they were going to get. Elections were rigged. Parties that won elections did not get to rule, other parties were dissolved. Military-backed governments have mishandled the economy, hampering growth.

While the Thai Armed Forces lashes out at corrupt politicians, it doesn’t even begin to try to address the unexplained wealth of senior officers. The RTA is among the most top-heavy militaries in the world, with over 1,100 general officers, far exceeding billets. There is a general for roughly every 300 soldiers.


The floundering response to the COVID-19 pandemic is the latest in a string of events since the March 2019 election that has significantly weakened confidence in the military.

Thais are inured to conscription, though it is unpopular. The Thai Armed Forces has defended conscription saying that it is essential for national security. Yet there is ubiquitous use of conscripts as house boys for officers. And the regularity of young soldiers dying from hazing has caused a public backlash.

Thais have put up with the unexplained death of insurgent suspects while in military detention, and the wrongful deaths of people the Army at first claimed to be suspected militants, but later acknowledged they were not. More recently a soldier tortured a suspected drug seller to death and beat his brother. The military, again in the spotlight, has announced that it may press charges.

Under immediate public pressure, the military always states its commitment to investigate these actions. But in time, the investigations grind to a halt, and charges are dropped. Even in the rare cases where security forces are charged with wrongdoing and convicted, they are invariably freed on appeals. The culture of military impunity is deep and grating.

A shady business dispute between a Thai soldier and his superior officer led to the most lethal mass shooting in Thai history, with 29 dead and nearly 60 wounded in Nakhon Ratchasima. The massacre led to further scrutiny of the military’s questionable use of state assets, and corruption within the ranks. Though the military pledged to transfer some of its assets, there has been insufficient follow-through.

Army chief Gen. Apirat Kongsompong would not take responsibility for the shooting, reinforcing the view that the military is beyond accountability.

But the regime’s inept response to the pandemic has added to the anger. Prime Minister Prayuth Chan-o-cha’s response has been sclerotic. Government policies have been contradictory, poorly communicated, and inadequately implemented. Prayuth has constantly reversed himself, and has appeared totally out of his depth.


The Minister of Health, Anutin Charnvirakulhas, has been ineffective, lashing out at the media, blaming the tourists and criticizing public health professionals who fell ill. And yet, he heads a key coalition partner in the military-backed government, which has a razor-thin majority. Despite calls for his sacking, Prayuth is hamstrung.

With under 3,000 confirmed cases, and 50 deaths, Thailand has not been hard–hit by the virus — at least not yet. That has bought the government some breathing space.

But Thailand’s seemingly good response has largely been in spite of the government.  Thailand’s good public health system and universal healthcare system has kept the pandemic largely in check. According to the Global Health Security Index, Thailand’s health system was the best prepared in the region. And yet, testing rates are still very low, only 40,000 as of 23 April. That’s 0.61 tests per 1,000 people, far less than Malaysia, which has conducted 3.29 tests per 1,000 people, and is the first country in Southeast Asia that appears to be flattening the curve.

The military, meanwhile, has been blamed for the spread of the virus. The first major community-based transmission cluster infecting well over 100 people was linked to an Army-owned Thai Boxing ring in Bangkok, sparking questions: why does the Army own a boxing ring, and why was the Army not following the government’s own social distancing guidelines?

Prayuth’s statement that he has asked the 20 wealthiest families to contribute to the pandemic response reinforces concern that managing the crisis is beyond the government’s means. And it’s been the military firmly in charge since 2014. They can’t pin this one on Thaksin Shinawatra.

But Prayuth’s statement also serves to remind people that Thailand has the most inequitable distribution of wealth in the world, a trend that has accelerated since the 2006 coup. Continue reading..

Dr. Zachary Abuza is a Professor at the National War College, in Washington, DC, where he focuses on Southeast Asian politics and security issues, including governance, insurgencies, democratization and human rights, and maritime security.

What’s More Deadly than the Covid-19 Coronavirus in Thailand?