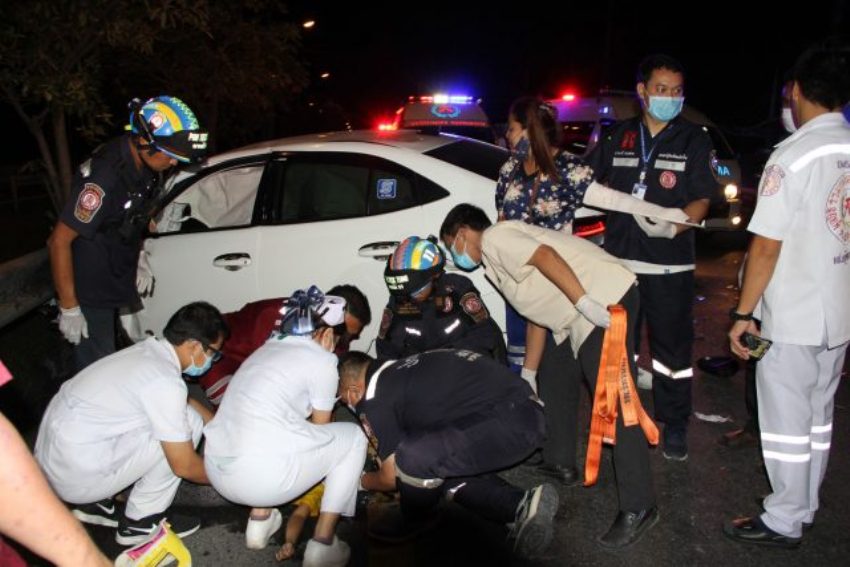 A 4 year-old girl has miraculously survived after she was thrown out of the window her mother’s car, when it crashed into a road barrier. The car first crashed into a truck trailer and then a roadside barrier in Samut Prakan province.

Police found the woman, named Banchuen, 39, and her daughter, aged 4, injured when they arrived at the accident scene. The two were given first aid by rescue workers before being sent to hospital.

According to truck driver Surasak Kowmanee, 42, Banchuen’s car crashed into his vehicle when he decided to turn his trailer into the industrial estate. The car then continued moving and crashed again by the side of the road.

Surasak jumped out of his trailer and raced to the car. He saw a worried Banchuen calling out for her daughter, who had been thrown out of the car window. Surasak searched for the girl and found her injured nearby, Thai Media Reported.

Meanwhile, a woman, who allegedly caused a fatal road accident in Samut Prakan province has told police that she didn’t stop to help the victims because “others were helping.” The 50 year-old woman Jampa Boonmajuab was riding her bike in the wrong direction which caused the death of one woman and injured another.

The wan was followed by 54 year old Somsak Pomnoy when a bike travelling towards them, on the correct side of the road, had to veer sharply out of the way, hitting a parked car. The 38 year old female driver, named as Nuchanart Thasiboon, was killed in the collision. Her the pillion passenger, 34 year old Benjawan Mcdull, broke her arm.

A report in The Thaiger says Jampa and Somsak have now turned themselves in at Muang Samut Prakarn Police Station, having initially failed to stop at the scene.

Meanwhile, Somsak, who works as a motorbike taxi driver, says motorbike taxis habitually drive on the wrong side of the road in that area as it takes less time than travelling 500 metres to the nearest U-turn.

Both have been charged with driving on the wrong side of the road, failing to stop and help after being involved in an accident, and dangerous driving resulting in death or serious injury.