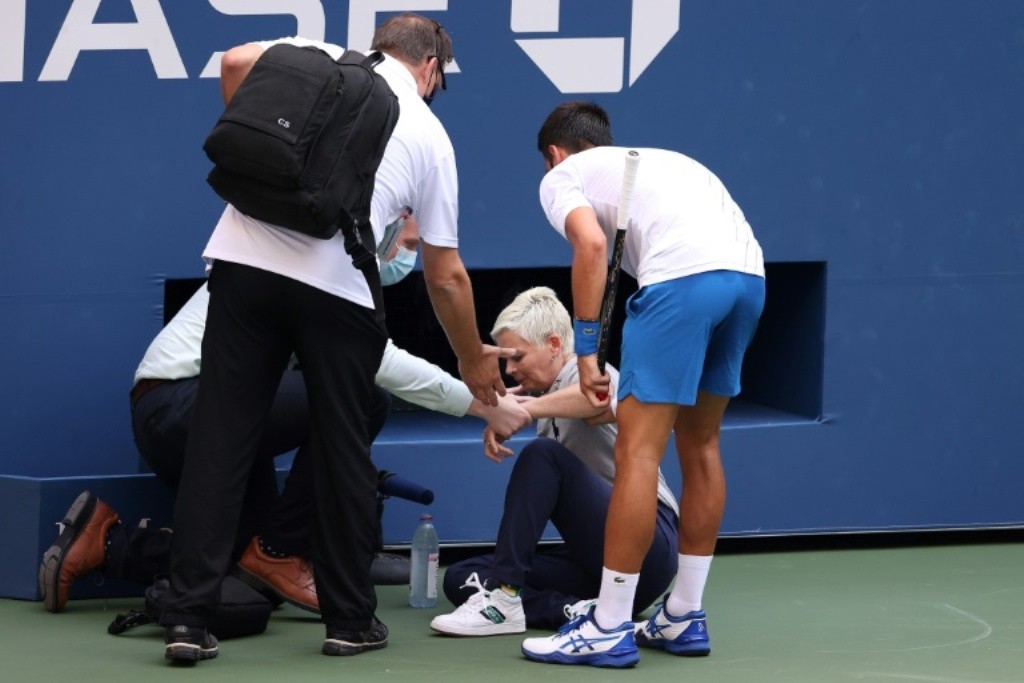 World Tennis Star Novak Djokovic was disqualified from the US Open on Sunday after striking a lines judge with a ball in frustration. This incident happened during his last-16 match. It also sent shock waves through the tournament.

The world number one Tennis Player apologized for hitting the ball in disgust. Novak lost his serve to go 6-5 down in the first set to Spain’s unseeded Pablo Carreno Busta.

Djokovic appeared to be looking the other way when he pulled the ball from his pocket and smacked it in the direction of the official. The tennis ball her consequently hit her in the throat. The official cried out and began gasping for air as she collapsed to the ground.

Djokovic rushed over to her to check if she was okay and placed his hand on her back as she struggled to breathe. After a few minutes she got up and walked off the court looking dazed. Around 10 minutes of discussions then ensued between Djokovic and the tournament referee Soeren Friemel, during which the world number one pleaded his case. The umpire then declared that Carreno Busta had won by default.

Djokovic shook hands with his opponent before leaving the court without appearing to shake the umpire’s hand. He  then went directly to his car and left the tournament  without speaking to reporters.

Djokovic, 33, later posted an apology on Instagram saying he was “so sorry.”

“This whole situation has left me really sad and empty,” he wrote, adding that “thank God” the woman was okay.

“I’m extremely sorry to have caused her such stress. So unintended. So wrong,” Djokovic said. He also apologized to tournament organizers for  his behavior. However he did not say whether he thought they were right to default him. The United States Tennis Association said Djokovic had been defaulted under the Grand Slam rules for “intentionally hitting a ball dangerously or recklessly within the court or hitting a ball with negligent disregard of the consequences.”

The body added that he would lose all ranking points and prize money from the tournament. Referee Friemel said Djokovic told him he should not be defaulted because it was unintentional.

Friemel said he agreed there was no intent but that it was a clear-cut case of Djokovic hitting the ball “angrily and recklessly.” “She was clearly hurt and in pain. There was no other option,” he told reporters.

The Serbian star is one of only a handful of players to be disqualified from a men’s singles tournament at a Grand Slam since John McEnroe was infamously tossed from the Australian Open in 1990.

Djokovic had been chasing an 18th Grand Slam title at the Billie Jean King US National Tennis Center. He was hoping to close the gap on Roger Federer and Rafael Nadal, both absent from the tournament, in the race for the all-time men’s Slam singles title record.

Meanwhile, Former tennis players reacted with shock at the disqualification. However they said officials had made the correct decision. “Right call!” former women’s world number one Tracy Austin wrote on Twitter.

Four-time US Open champion Martina Navratilova said officials “had no choice” but to default Djokovic.

Former British number one Greg Rusedski described the disqualification as “unbelievable” but said officials had made the “correct decision.”

Djokovic had been the overwhelming favourite to capture a fourth US Open title. His disqualification blows the men’s draw wide open and means it will crown a first-time Grand Slam winner next Sunday.

Then and Now: Looking At Some of Asia’s Best Football Players